The KTM 450 EXC-F was already the benchmark for what a bigger-bore off-road racer should be, winning multiple races and championships around the world. KTM has the mantra lighter, faster, stronger for the new generation of off-road bikes in 2017.

MotoOnline.com.au was lucky enough to get the invite across to Les Comes, Spain, for the international launch of the MY17 KTM EXC and EXC-F range. Its not every day you get the opportunity to fly to the other side of the world and ride a complete range of the newest off-road machines.

KTM has redesigned the MY17 EXC and EXC-F range from the ground up – chassis, motor, ergos, everything! WP even produced new XPlor 48MM forks and PDS shock to finish off the new generation of off-road KTMs.

KTM set up a 12km enduro loop and special test track to put the EXCs through their paces for us to report back to you on the new off-road weapons. Lets get straight to the major improvements first. Weight reduction’s down 5kgs from 2016, mass centralisation to improve agility, compact engine with more torque and smoother power, and new WP EXplor forks and shock.

The new ergonomics of the bike have been changed to aid the rider in comfort and also a few cleaver solutions to prevent problems out on the trail. The seat height has been lowered by up to 10mm, which seems to feel more comfortable and fits in well with the newly-designed rear fender.

The fender features integrated grab handles which make moving the bike that much easier. You wont be grabbing a handful of dirt the next time you grab the bike by the rear fender to lift over rocks or trees. 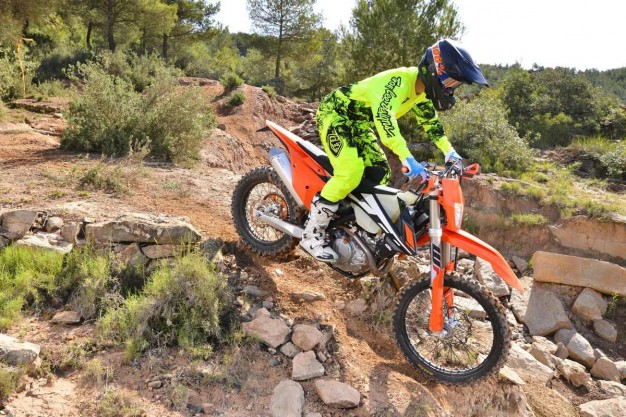 The ‘No Dirt’ footpegs have been designed to avoid clogging with mud and have been raised by 6mm for better ground clearance. This is not something that you will notice too much, but if you’re a taller rider or just want to feel lower on the bike, then you can change the height easily to be more similar to the SX. The shift lever has also been redesigned to prevent mud in the ‘shift elbow.

ODI lock-on grips get rid of the hassle of gluing grips, again not something that is a game-changer, but reduces the hassle of changing grips. It also makes changing the interchangeable throttle cams easy.

These throttle cams change the response characteristics of the bike. We had the opportunity to try a slower pull throttle cam, which was a little hard to get used to at the start, but I could see the merits in using something like this in muddy conditions – might help tone down the power of the 450.

This was not something that we were able to get the full advantage of during our ride as it was dry, however on some of the more slippery parts of the trail, we did notice the engine adjust when the rear wheel spun up. It’s a unique system that simply improves your ride experience and riding itself without you even actually noticing, as such. It’s another clever feature.

As with every other KTM, the 2017 450 EXC-F is fitted with Brembo front and rear brakes with a new rear brake caliper. The pedal has been extended by 10mm and the piston has been reduced by 2mm, which is just fine-tuning the controllability of the brake action. As per usual the 450 EXC-F has a hydraulic clutch, which gives an amazing light constant feel. The overall feel of the cockpit is really natural. I am an average height rider at 180cm and I really didn’t notice the height change in the footpegs, but like we mentioned, you can adjust this quite easily if it is a problem. The bike is fitted with Pro Taper bars, which can be adjusted in the triple clamps in four different positions.

KTM has also integrated the front braided brake line with the speedo cable joining at the headlight down to the front fork guard. It’s not something that is going to add to the performance of the bike, but certainly cleans up the front-end of the MY17 models.

Holding the MY17 KTM 450EXC-F together is a new redesigned chassis. By completely redesigning the chassis it has allowed KTM to make significant improvements in weight reduction and mass centralisation, which are key factors to improving the handling of any bike.

KTM hasn’t stopped there and has reduced the rigidity of the bike front to back, allowing the bike to flex a little better helping the bike absorb more impacts while working with the suspension and they have increased the stiffness side to side giving a more stability in corners. The swing arm has also been revised for MY17 to accommodate the new WP XPlor shock.

Suspension, air or spring? WP have developed all new XPlor 48mm upside down ‘spring’ forks for the new KTM EXC and EXC-F range, making the forks lighter and the ease of adjusting on the fly that much easier.

30 clicks of rebound adjustment on the right side and 30 clicks of compression adjustment on the left side are featured. Both adjustments can be made via the large clicker knobs on the top of each fork tube. An optional pre-Load adjuster can be purchased as well, which can be adjusted without the use of tools.

The WP PDS shock has been improved upon for 2017 with a different internal design to improve bottoming and giving a more progressive feel towards the bottom of the stroke. The shock is also lighter by using a slightly slimmer shock piston and the total length shortened by 2.5mm. The new design of the shock and chassis have allowed the shock to be mounted closer to the centre of the swing arm and chassis, which allows the rider to have a more symmetrical feel. 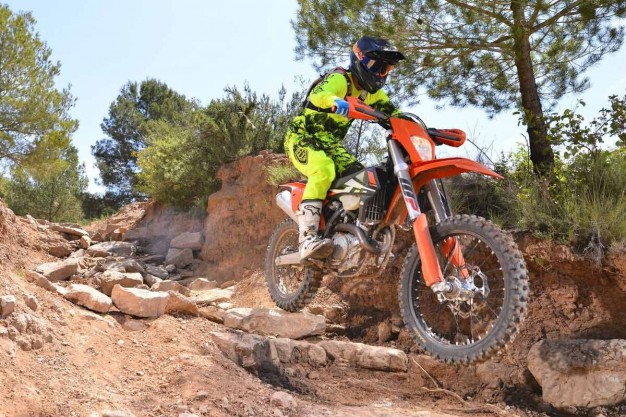 WP has really hit the mark with the new suspension and gives the rider great feel both front and back. The suspension soaks up the smaller bumps no sweat and the improved bottoming resistance helps out on the bigger hits, giving you a plush feel front and back.

The ability to change the fork settings on the fly while you are out on the trail will be a real benefit also. I don’t tend to go searching for the ‘perfect’ set up, as long as its close I’ll just enjoy the ride, but knowing you can change things up easily is a real bonus.

The MY17 KTM 450 EXC-F engine is a powerhouse, it’s more compact, lighter and has even more power than 2016! What is not to like about the new engine? The single overhead cam engine has enough power for any rider and can be tamed down with the mapping/traction control switch.

The 450 EXC-F engine is given life by a state of the art Keihin engine management system with electronic fuel injection. Featuring a new 42mm throttle body and different injector position, the response to this animal is much quicker and direct than the previous model.

Putting power to the ground is undertaken by the new six-speed gearbox with refined and precise gear ratios, making the 450 EXC-F so much fun to ride. There is power on tap and it keeps pulling right from the bottom all the way through the gears.

It is understandable why the KTM is so much fun to ride with power delivery so easy and can be made more manageable using the traction control/mapping switch. Another small improvement KTM has made is to the airbox. It improves airflow and also is more user friendly with multi-directional filter cage just to help out with installation. The engine is kicked into life by a new Mitsuba electric leg, powered by an all-new compact lithium ion battery. If you are not comfortable with the lack of kick-starter, you can always retro-fit one at a later date. However, no one has had to crank-start their car in my lifetime, so maybe its time to ditch the kick-start as well?

Feeding the 450 EXC-F engine is a white/opaque 8.5 litre tank with an integrated fuel pump. There is no guessing how much fuel you have left, but there is also a fuel sensor if you’re not paying attention. A new 90-degree fuel line connector has also been added to help against damage.

In short the KTM 450 EXC-F is a weapon! It has power to burn and handling to match. Right from the time I got on the 450, it didn’t feel like the bigger ship that I was used to on any of the big-bore bikes I had ridden previously.

The 2017 edition feels light and manoeuvrable in the tight singletrack, while having as much power as I could handle on the open trails. It was great to be able to play around with the traction control and mapping features, which is probably one of the first things I would add to this bike.

In the tight parts of the trail, knocking the 450 into the slightly tamer map allowed me to feel a little more in control and felt like it was easier to ride and saving some energy on a longer trail ride.

The bike feels like you can move it around when and where you want, it’s not like you’re pushing a light two-stroke around, but its definitely different from what a 450 felt like five years ago. The suspension is really plush and forgiving, there weren’t many really big hits that we encountered, however the bike floats well across rough small rocky sections and was really predicable.

The 2017 KTM 450 EXC-F is an awesome package, its easy to see why they will do so well in the enduro and off-road championships globally, while also appealing to non-competitive riders as well.

It will be hitting Australian shores at the end of July/early August this year with a price tag yet to be announced. Further information on KTM’s complete range and specifications can be found at www.ktm.com.au.