Counting down five key points heading into Wanneroo's round five.

Every second year the Motul MX Nationals series makes its way to Western Australia for one of the most gruelling events on the Australian motocross calendar. This weekend’s Wanneroo event will prove tough and challenging for each and every rider, but what other factors will come in to play? In this latest edition of countdown we take a look at what else could factor in to the results from round five. 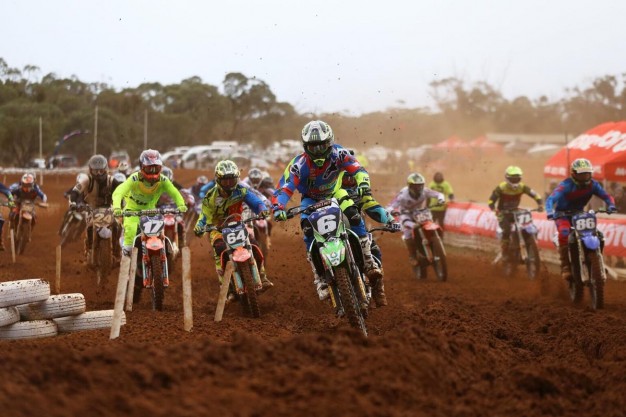 5. The mid-season break:
It is crazy to believe that we are only days away from going racing for the last time ahead of the all important mid-season break. The five-week rest in between rounds allows competitors to either recover from niggling injuries, get in some additional training, revaluate their championship attack plan, or sit back and admire their red plate and championship lead. Every year before the break commences though, round five provides one last chance for competitors to leave their mark on the championship before the final dash to Coolum commences. In the MX1 class, Gibbs’ performances so far this season have not shocked, but pleasantly surprised spectators. Coming off a nasty injury in the off-season and being forced to take on the likes of Waters and Ferris to defend his title, many believed that the KTM mounted rider wouldn’t meet the mark – but the first four rounds have proved that Gibbs is not only a threat, but a title contender and he’ll be looking to make one lasting impression on the field this weekend. As for the MX2 competitors, Beaton has proved at Broadford that in tough conditions, he not only survives, he shines. In saying that, Crawford has quietly been chipping away over the last four rounds without an overall victory, and only needs to make up one point on his Victorian opponent in order to take the red plate, so will Wanneroo be where he launches a fully fledged attack on Beaton for the championship lead before the break? It will all play out in just four days’ time.

4. GoPro Super Pole:
With the Thor MX1 Championship the tightest it has been in years, not only will every race count this weekend, but GoPro Super Pole could be a deciding factor in championship points and standings at the conclusion of the round. At Murray Bridge, CDR Yamaha’s Ferris extended his points lead on Gibbs with a Super Pole win, however it wasn’t quite enough to hang on to the red plate when the points were tallied when the round wrapped up. So far this year, Gibbs is the only rider inside the top three who has not yet taken out a GoPro Super Pole victory, however he is the only rider who has actually had the experience of putting down a Super Pole lap at the Wanneroo venue (In 2014, he finished fourth in Super Pole with a 1:45.659 lap time). With that said, when GoPro Super Pole is run and won this coming Sunday, you could very well be looking at the guy who will be leaving WA with the MX1 red plate.

3. Three motos:
Who will be able to survive three gruelling motos in the sand this weekend? It’s the golden question. Will three 20 minute races suit some riders better than others? Or will there be some who crack under pressure when they’re forced to go to the line not twice, but three times? One thing is certain, and that’s that the Thor MX1 and the Motul MX2 top three are all of relatively the same fitness, and shouldn’t be too phased by three races on the deep loamy surface. The plus side to three motos, is there are even more points on offer at round five. Someone has the opportunity to either run away with it, or on the flip side, utilise the three races to make up significant ground in the overall championship standings ahead of the break. One result no one will want this weekend is a DNF, and one thing we know about sandy conditions is that there will be riders who may not finish all races this Sunday. 2. The experience:
Incredibly, there are only three riders in the Motul MX2 top ten who raced at Wanneroo in the MX2 class last time the MX Nationals visited in 2014. Caleb Ward, Nathan Crawford and New Zealander Hamish Harwood. With Ward well known as being a sand specialist, Wanneroo could be called some what of a playground for the young Queenslander, and with experience at the venue, it may be a walk in the park for him at round five this weekend. A surprising fact is that Jake Moss who is currently placed third in the MX2 championship took two moto wins and a Superpole victory in the MX1 class in 2014, so it’s highly possible that he too will carry some additional confidence into round five due to his previous successes there, and put Beaton to the ultimate test. As for the Thor MX1 class, in 2014, Gibbs finished just a position shy of the podium in fourth place overall, while National Pump Monster Energy Kawasaki’s Matt Moss actually finished second overall to Billy Mackenzie two years ago. Could we see a return to form from the former champ Moss at round five, or will Waters and Ferris be unstoppable after racing in Europe? Or could it be a round where Gibbs utilises his lessons from the venue in 2014 to enter the mid-season break with the red plate? This weekend it will all be decided.

1. The Wanneroo sand:
If there is one thing that is set to sort the boys from men this weekend it’s the deep sand of Wanneroo. Touted as one of the toughest circuits in the country, it’s quite often been a story of the local riders impressing at the WA venue. However, with both Dean Ferris and Todd Waters having significant experience at European MXGP tracks such as Lommel, it’s quite possible that the change up in surface conditions this weekend, may play into the favour of both Ferris and Waters – and if it does, there is no guessing as to who may enter the mid-season break with that red plate! As for the Motul MX2 competitors, the last time the MX Nationals visited Wanneroo it was Caleb Ward who emerged from the round victorious – and with a 20-point deficit on championship leader Beaton (Ward currently sits in fourth in the MX2 standings), the KTM mounted rider will be hoping to snatch up maximum points in order to close the gap before the break.