After a disastrous weekend at Broadford a few weeks earlier, KTM Motocross Racing Team rider Caleb Ward responded in the best possible way at Murray Bridge on Sunday with a clean-sweep of the MX2 ranks. Many feel this is Ward’s title to lose in the 2016 Motul MX Nationals, however with red plate holder Jed Beaton and Husqvarna-mounted Nathan Crawford right on their games, it’s not going to be an easy run to a first crown by any means. MotoOnline.com.au spoke to Ward post-race to get his take on a pivotal turnaround. Caleb, 1-1 here Murray Bridge, which was great result for you obviously in terms of the championship. It must of felt really good…

Yeah, for sure! Obviously what I needed to do to get back and get that red plate back, is just go out and win motos and just beat those guys consistently. I have been training really hard these last couple of weeks after I had a week off after Broadford just to rest up a few things. Had a few little bits and pieces that were a bit sore after the big crash and everything, I’m feeling pretty good now and obviously that was an awesome day – I’d just like to keep that going for the rest of the season now.

You had to come through the field, through the top guys, to get into the lead in both motos. What was it like from your perspective?

It actually sucked being behind those guys! I’ve got the flu a little bit, so my nose was running really bad and I couldn’t breathe through my nose, so my mouth was open the whole race. When I am behind those guys, it was sort of sandy, so I was literally eating sand the whole moto and sucking it in. It wasn’t really nice, the roost actually really hurt that second moto, it was pretty cold and everything, so made it difficult. Once I got past those guys I put in a bit of a sprint, obviously the 20-minute motos have been my downfall a little bit, so this one I was a little bit patient at the start and just passed the guys and tried to sprint away and tried to keep a reasonable gap. It was a good race.

It was pretty windy out there, could you feel the wind on the bike?

Yeah! On the big ski jump down the back, most of the jumps were alright, but it was just that ski jump down the back. Every time you hit it you felt the wind pretty bad, was a little bit sketchy but you sort of had to scrub and try and stay low and back on the ground as soon as possible. I think the 450 guys had it worse when they were out there in their first moto and it was really bad it was like a dust storm came through, but wasn’t to bad for us really. 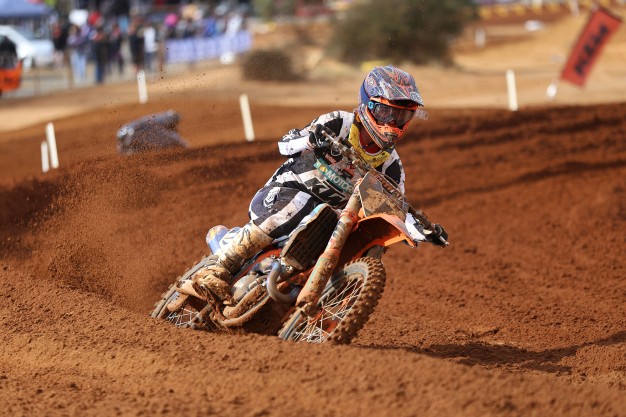 In terms of the championship, you’re 20 points behind now in fourth. That’s a pretty good jump back up the order and you’re a lot closer to the lead than coming in this morning.

Yeah, for sure. I went from being 11 points ahead going into Broadford, then left like 30 or 35 points down. I lost so many at that round, so I just needed to go out and do exactly what I did today and to make it back up. Obviously it’s kind of unfortunate that one and two in the championship finished two and three behind me today in the moto, that makes it a bit harder to make up the points, but they’re riding awesome – I have to give to them. I’ve just got to keep going out there and getting consistent starts and just try and tick off as many races as possible.

You looking forward to back-to-back weekends, heading straight to Wanneroo?

Yeah, obviously two years ago when I went over there I had a really good time in the sand and everything is quite a bit different, to the sand in the rest of the country. It’s good though, because it sort of separates everyone a bit I guess. I still have to watch out, some guys ride a bit loose in the sand [laughs], so I just have to get good starts and the biggest thing is to go out and do my own thing really, ride like I know how to. I’m looking forward to it.

No worries, Thanks mate!