Post-race updates direct from the fourth round all day long.

Follow all the action direct from Murray Bridge’s fourth round of the 2016 Motul MX Nationals. MotoOnline.com.au will update this feature directly following each race as they happen throughout the round. 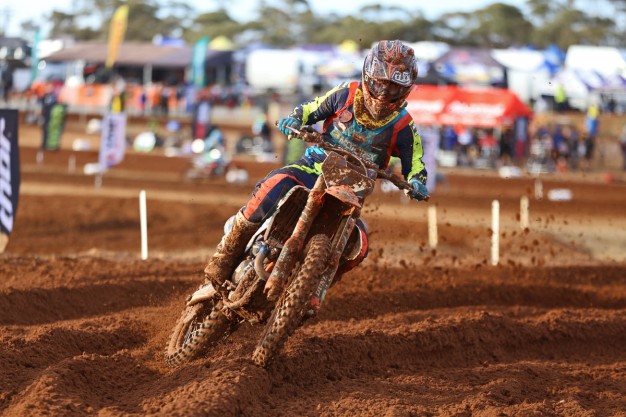 Motul MX2 Moto 2:
A convincing performance from Ward saw his sweep the round with the moto two victory, making his way to the lead in the opening half of the race and he was never headed. It was the ultimate way to bounce back for the title favourite following a horror Broadford round, topping Crawford and opening laps leader Moss in the race. Beaton was directly behind for fourth at race’s end, while Porter turned heads to complete the top five. Wills, Todd, Hamish Harwood (Davey Motorsports KTM), Joel Wightman (Honda CRF Racing) and Hunter were the top 10 finishers. Overall for the round it was Ward who stood atop the rostrum, with Crawford second and title leader Beaton third. In terms of the championship it’s still Beaton who remains at the head of the standings, one point ahead of Crawford, while Moss is third. Ward moved all the way back up to fourth, now 20 outside the lead.

Thor MX1 Moto 2:
It came down to a battle of the South Australians in moto two of the MX1 division and, much to the delight of the local fans, reigning number one plate holder Gibbs charged to victory after overcoming initial pace-setter Metcalfe in the closing laps. Gibbs built an advantage in the final moments to best Metcalfe, while Waters made his way to third in the moto – enough to secure the overall. Fourth across the line was Ferris, from Moss, Mosig, Long, Daniel Banks (Davery Motorsports KTM), Wright and Luke Wilson (Wilson’s Coolair Motul Suzuki). Overall for today it was moto one winner Waters who claimed victory via his 1-3 finishes, bettering Gibbs’ 4-1, while Metcalfe concluded his homecoming – he’s now headed back to race the Canadian nationals – in third. The championship points now see Gibbs take charge by a point over Ferris and Waters a further four behind in third.

Pirelli MXD Moto 2:
The final MXD moto was won comfortably by Evans, the factory-supported YZ250F rider over 20 seconds ahead of the field in a strong finish to his round. However it was second in the race for points leader Tierney that sealed him the round win, extending his championship advantage in the process. Joining the duo on the podium was Kirkland, followed by Pozniak, Barham, Justin Hart (Husqvarna), Small, McManus, McCoy and Sam Pelz (Yamaha). For the round Tierney topped Kirkland and Pozniak, also leading the series from the same pair.