A range of topics with the newest addition to the DPH Motorsport rider roster.

After parting ways with the SD3 Husqvarna squad at the last minute ahead of the 2016 season, Jacob Wright rolled into Horsham’s opening round of the Motul MX Nationals aboard a KTM 450 SX-F provided by KTM Australia. The rest of his MX1 program was left up to him and supported by a small number of sponsors he pushed through the opening three rounds with mixed results before an opening on the DPH Motorsport team became available. MotoOnline.com.au caught up with the Queenslander today to hear his thoughts on the season to date, his latest Yamaha-backed deal and more. We got a bit of help with two bikes from KTM Sunshine Coast and I got some help with gear from Shift and Fox, so myself, my Dad and Dan [Kersnovske] from MXRP just made it happen. It was a financial struggle for sure and things were already getting tight three rounds in, but we made it happen and it has been good so far.

Just through word of mouth I heard that Lawson Bopping wasn’t 100 percent and may not be finishing out the series, and after Broadford I sent them a message to let them know I was available. So we spoke again later that week and it was confirmed that he wasn’t going to finish out the nationals. They said a bike and ride was available so I jumped at it said I’d take it 100 percent. I also have to say a huge thanks to my existing sponsors such as KTM, Fox and Shift for supporting me and allowing me to take the ride with DPH Motorsport mid-season.

Being back on the Yamaha YZ450F again…

I’ve done plenty of hours on the Yamaha and plenty of testing with CDR in the back half of 2014 and the start of the 2015 season before I did my knee. I’m really comfortable on the Yamaha, I really like the bike and the way the frame works. I think it’s definitely more suited to me and I know how to set it up, so I’m really looking forward to getting back on it, it won’t be a struggle at all. 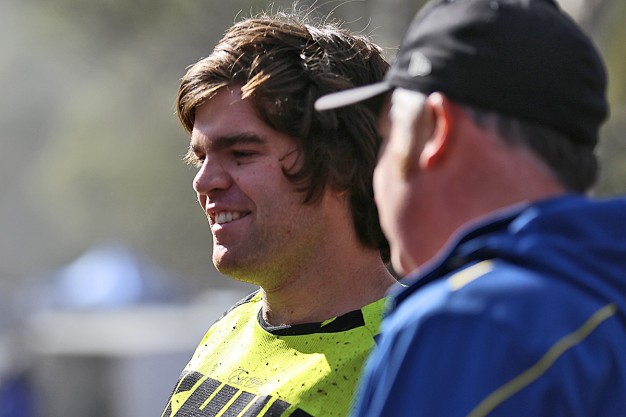 Sitting 10th in points at this stage in the season…

Obviously 10th is not where I want to be and we did have one bike issue in moto one at Horsham that let us down in points. We’re usually around eighth to ninth place at the moment and I think anywhere inside the top five is really solid and that’s where I want to be. I think the top three guys right now are definitely at a world class place, so anything inside the top five I’ll be happy with. I think the eighth and ninth place finishes are coming from a lack of racing. I didn’t get to race a dirt bike for 18 months, so to be thrown in the deep end it’s definitely hard to be right back up the front, but I have no doubt I’ll be back up there for sure.

The level of competition in the premier class this year…

The top three guys at the moment are really setting the pace, I think Todd [Waters] and Dean [Ferris] have lifted the level a lot as well. It’s just making everyone rise to that level, so it’s definitely going to be a solid championship. I think if you get inside the top five, or manage to stand on the podium, you’re really going to be noticed because it is so stacked.