Reigning champion takes first overall of the year at Broadford.

KTM Motocross Racing Team’s reigning Motul MX Nationals MX1 champion Kirk Gibbs broke through for his first overall of the 2016 season at Broadford, Victoria, on Sunday. His pair of second-place moto results were good enough to clinch the victory, placing him just one point outside of the series lead three rounds in. MotoOnline.com.au spoke to Gibbs when all was said and done to get his thoughts on the round. 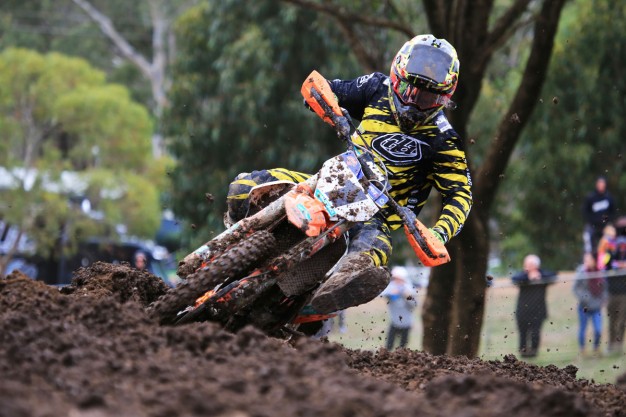 Defending MX1 champion Kirk Gibbs, 2-2 here at Broadford, getting the overall win. It must feel good to stand on top of the podium for the first time this year…

Yeah, definitely! Obviously us three boys Todd [Waters], Dean [Ferris] and I established ourselves out the front, even Matt [Moss] sort of right there, who was just a touch off today. I think us boys separated ourselves a little bit in this early stage and it’s awesome to stand on the top step. It’s such a deep field, I’m just happy to be riding well and battling with these boys.

Obviously difficult conditions out there today following a lot of rain this morning, but then it eased up and the track slowly dried during the day aside from that sun-shower in moto two. How was it on the bike?

It was more like trail riding today [laughs]. Physically it wasn’t too hard, the track, it was more mentally, you had to keep a pretty strong mind in keeping right on the ball and where you’re going. Obviously the lines were all over the place, so you had to be right on the ball. I just tried to be pretty patient today. I got off to a really good start in the first moto and second start I messed up a little bit, but I still came out not too bad. I had a little crash in that last moto, which I was a bit disappointed with, but other than that I obviously felt pretty solid all day and am really happy to get the overall. I’m still chasing that race win, haven’t had one yet, so I’m looking forward to heading to Murray Bridge and hopefully getting one of them. 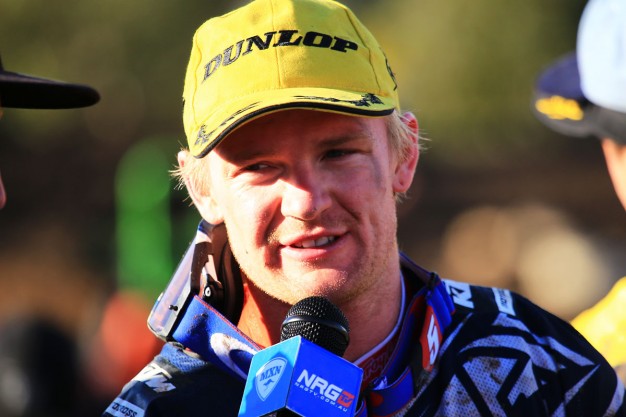 Next time out in South Australia, taking the number one plate home to your original home state for the first time, that should be pretty special.

Yeah, should be pretty cool, obviously I have a lot more support there, so it should be really good. I’m just going to take it like every other race and just head there and chase wins and chase them points. I’ve been really consistent this year and I want to keep it that way and fight to the end.