Post-race updates direct from the third round all day long.

Follow all the action direct from Broadford’s third round of the 2016 Motul MX Nationals. MotoOnline.com.au will update this feature directly following each race as they happen throughout the round. 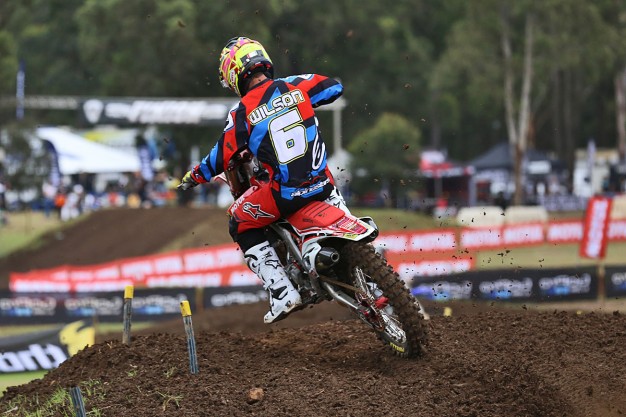 Practice/qualifying:
Rain greeted the MX Nationals paddock upon arrival this morning at Broadford, causing officials to cancel the timed qualifying sessions. Practice still went ahead – timed but not overly reliable because of riders crossing the circuit in various places – and the sloppy conditions were challenging even the best of Australia’s motocross contenders. The opening moto gate picks will be selected via the current championship standings entering round three.

Pirelli MXD Moto 1:
The gates dropped on the opening MXD moto of the weekend after the lunch break for the Broadford round, with the track conditions improving as the sun emerged for the afternoon. By the time the chequered flag flew it was Yamalube Yamaha Racing’s Mitch Evans who claimed the win, overcoming longtime leader Lochie Latimer (Yamaha) and Connor Tierney (Husqvarna) to complete the rostrum. Wade Kirkland (KTM) was fourth in the end and well ahead of Jordan Hill (Yamalube Yamaha Racing), with Kaleb Barham (SD3 Husqvarna), Zak Small (Husqvarna), Hugh McKay (Yamaha), Cooper Pozniak (KTM) and Luke Abela (KTM) the top 10 runners.

Motul MX2 Moto 2:
The second MX2 moto of the round belonged to Beaton, backing up his race win from the morning and completing a 1-1 sweep for the weekend. Beaton was all class once again in moto two, racing ahead to the victory by almost 20 seconds from Arbon, with Webster completing the top three. Wade Hunter (Serco Yamaha) crossed the finish in fourth from Crawford in fifth, while Todd, Moss, Hamish Harwood (Davey Motorsports KTM), Wills and Evans were inside the top 10. Overall for the round it was Beaton who won was victorious over Webster and Arbon, while in the standings it’s now Beaton at the top, leading Crawford and Arbon. Previous red plate holder Ward is now seventh after scoring 15th in moto two.

Thor MX1 Moto 2:
The second MX1 moto had a dry line when the gates dropped, which soon became slick again when the rain came for the afternoon – a brief sun-shower adding to the technicalities of the afternoon. But it was Ferris who continued his tradition of winning at least one moto per round, this time the second ahead of Gibbs, Moss and a fast-finishing Waters, who recovered from an early clash with Mosig. Fifth was a top result for Long, while the top 10 places were completed by Metcalfe, Reardon, Wilson, Jacob Wright (KTM) and James Alen (KTM). Overall despite not winning a moto Gibbs won the round, joined in the top three by Ferris and Waters. In the championship chase it’s Ferris who leads the way by a single point from Gibbs, with Waters a further seven behind in third.

Pirelli MXD Moto 2:
Moto two of the MXD division this afternoon resulted in a Yamalube Yamaha Racing team 1-2 as Hill this time won the race by a sizeable margin from teammate Evans, with Kirkland, Pozniak, Barham, McKay, Latimer, Small, Travis Silk (KTM) and Tierney the top 10. Overall for the round Evans won from Hill and Kirkland, however Tierney – sixth overall today due to his 10th in the second outing – still has the red plate by 16 points from Kirkland and Hill, a further five behind following today’s third round of the year.