A range of topics with the CDR Yamaha Off-Road rider.

Following a slightly slow start to his 2016 campaign, CDR Yamaha Off-Road’s Chris Hollis claimed his first Outright victory of the Yamaha Australian Off-Road Championship at Murray Bridge in South Australia over the weekend. MotoOnline.com.au checked in with the 31-year-old from Port Macquarie today to hear his thoughts on winning round five, being part of Craig Dack’s impressive outfit and more in this latest Fast Thoughts interview. Winning round five of the 2016 Yamaha Australian Off-Road Championship…

Yeah it feels good, it’s been a bit of a slow start to the year for me. I had a few dramas at the first round, the second round I didn’t feel really comfortable, so it was good to come out and get a win at round five. The tracks were really fun and everyone was really close, so it was good to get out on top.

It is a really good bike, Yamaha have done an awesome job with that bike. It’s exactly what everyone was asking for and they delivered it. I love it, it’s a perfect bike for enduro, they’ve done such a great job with it. It’s also being proven with everyone on the bike being up at the front, so it’s definitely a competitive bike off the showroom floor.

Being part of the CDR Yamaha Off-Road team…

The CDR team is awesome and Dacka [Craig Dack] runs a really tight ship, so it’s been great. It’s my fourth year with the team this year and they look after us really well. The bikes are at the top spec you can get when they come to the track and our practice bikes are exactly the same, they look after us so well with practice bikes. We tend to do more long distance riding in off-road and they don’t get worn out really quick, but it’s just good to stay on fresh bikes. When we get to the races our race bikes are so fresh, so it’s good to have an up to date practice bike all the time and it’s just like getting off one to the other. 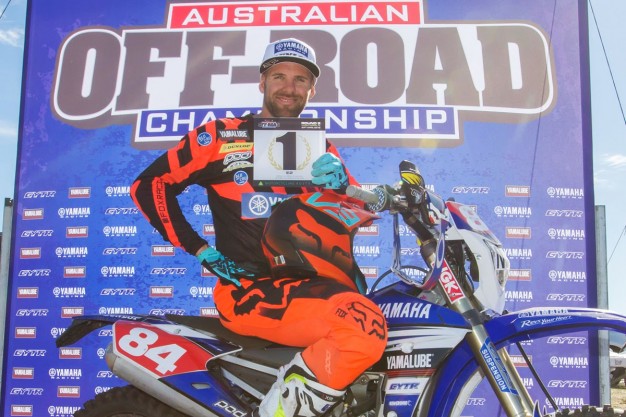 Competing against the new generation of off-road racers..

Everyone’s picked it up a notch this year for sure, the top 10 guys are all riding really fast. It’s not like there’s a huge gap back to 10th place anymore, they’re all so close. The boys have gone really well, they’ve all picked their game up a lot. Obviously since Toby [Price] left they’ve seen a big void he left and they all want a shot at it, which is good. They’ve all proved themselves and they’re riding really fast, I think we’ve had six rounds and three different winners now, so that’s just showing that it’s starting to get mixed up. We’ve got a bit of a break now as well for two months, so that’s be interesting to see when we get back into racing if anyone’s picked it up and we might have some other people on the top step.

Your take on desert racing…

I think everyone’s different, some people want to race everything, some people just want to do what they know. For me I don’t have any desert background, I don’t have anywhere here to train and I just don’t do much of that high speed stuff. It’s something that Yamaha haven’t pushed for either and I haven’t pushed for it. I’m happy just to do the off-road series and the four-day to be honest, that’s what I’ve been doing for the 10 years now. I went and did the pre-run for the Finke and I’m just not a huge fan of the high speed, I love what we’re doing now. Some guys like the high speed and some don’t, so I guess I just probably don’t too much and I know if I go and race it, I’ll want to race, which is a bit scary when I’m not used to it.