CDR Yamaha's MX1 round winner on the Appin MX Nationals.

The Appin stop of the Motul MX Nationals season was a good one for CDR Yamaha’s Dean Ferris, winning the opening moto yet again and going on to capture his first overall of 2016 upon return to Australia. MotoOnline.com.au spoke to Ferris post-race to get his take on the weekend, among other related topics. And next time we see him, Ferris will be wearing the red plates aboard his factory-backed YZ450F. Yeah! It’s a good day to come away with a win and a red plate, can’t ask for much more. Stoked I took a red plate, I did it here five years ago and it was also round two at Appin, so whether that means anything, I don’t know. I had good memories here, so yeah stoked with the outcome. I still feel like I could ride a bit better, these first couple of tracks are a little bit tight and it’s something I haven’t raced on for a long time, so I’m still adapting to that, but all in all it was a good day.

That first moto was a good battle between yourself, Gibbs and Waters as well. You made it happen there in the final stages, got into the lead on the last lap, so talk us through that one…

Yeah, we had battles all day long, us three. But the first one I was just really tight and they came by me because I was in the lead and I only just hung onto them. The last few laps were really good for me and I pasted Todd second last lap and Gibbs on the last lap, made it happen. I wasn’t that satisfied with my riding, I still won, but I was a little bit tight and I could see Todd riding tight as well, but anyway, stoked with that!

I mean yeah, we both jumped to the outside rut that we wanted and we connected. Gibbs isn’t one person I want to hit, he’s a really nice guy and rides clean, so appologies to him, but we didn’t come down so that’s the main thing. 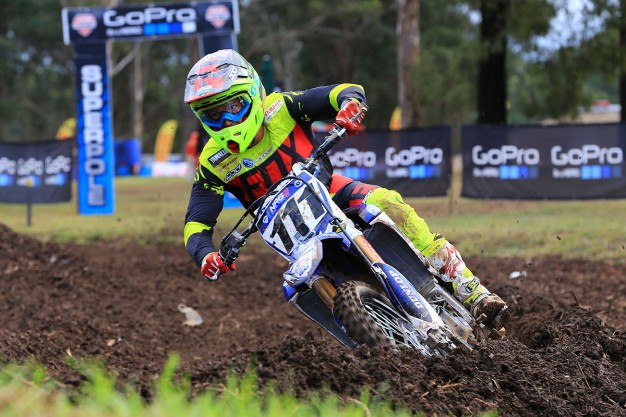 Moto two you were third, talk us through that one from your standpoint.

In moto two I rode really tight in the beginning again and the other boys were just a bit quicker. I was in fifth for a long time and again, just towards the end, I found some I don’t know, wouldn’t say lines, but confidence in the track and I came through again. I got Gibbs again, but it was a little too late to get Todd. We reeled in Metty as well, so I don’t know what the deal was there, but the last few laps with Todd and I were pretty good. I was more happy with them few laps at the end than any other lap I did all day.

How are you finding CDR Yamaha, now that you have been with them for two rounds? It’s obviously a greatly respected team, been around for a long time with a lot of success, so are you enjoying it so far?

Yeah, loving it! The guys are really professional and, you know, it’s a team that I really wanted to get on. But for whatever reason it never worked out and obviously I was gone for four years overseas and I got in early and made it happen this time. So yeah, stoked to be on board and I know I made a really good decision to come home and ride for these guys. So far so good, they have been putting in and I have been putting in – that’s all I can ask for.

No worries, well done and looking forward to the next one.