Post-race updates direct from the second round all day long.

Follow all the action direct from Appin’s second round of the 2016 Motul MX Nationals. MotoOnline.com.au will update this feature directly following each race as they happen throughout the round. 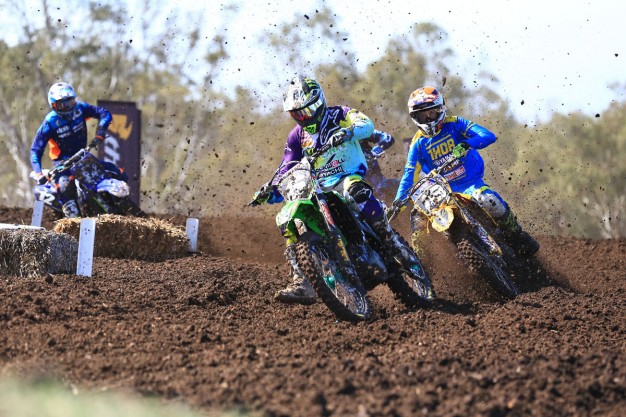 Motul MX2 practice/qualifying:
Serco Yamaha’s Wilson Todd led the MX2 qualifying session at Appin this morning, his 1m47.208s laptime over a second quicker than red plate holder Caleb Ward at 1m48.311s. It was a strong first showing this morning from Kale Makeham in third, another three tenths in arrears, but just ahead of Jake Moss and Kyle Webster filling the top five. The top 10 was completed by Jed Beaton, Wade Hunter, Richie Evans and Nathan Crawford. Conditions so far are dry in the area, but the track is wet from the pre-event watering.

GoPro Super Pole:
Waters converted his provisional pole position to the Super Pole win at Appin and claiming the three points that go with it, his scorching 1m40.295s lap over two seconds faster than what fellow former MXGP regular Ferris produced in second. Lawson Bopping wound up third, within a second Ferris ahead of him, while Gibbs was fourth and Moss fifth after he was late to the single lap session.

Thor MX1 Moto 1:
A thrilling opening MX1 moto saw CDR Yamaha’s Dean Ferris capture his second win of the year, clawing his way to the top spot on the final lap after working his way by Kirk Gibbs (KTM Motocross Racing Team) and Todd Waters (Wilson’s Coolair Motul Suzuki) in the closing laps. Waters led for the majority of the race until he came under pressure from Gibbs, but it was Ferris who stormed to the front when it counted. Ferris won from Gibbs and Waters, while Brett Metcalfe (SD3 Husqvarna) climbed through the field for a fighting fourth. Fifth and sixth were National Pump Monster Energy Kawasaki teammates Matt Moss and Kade Mosig, while Dan Reardon (CDR Yamaha), Jacob Wright (KTM), Jay Wilson (Crankt Protein Honda Racing) and Lawson Bopping (DPH Motorsport Yamaha) filled the top 10.

Motul MX2 Moto 2:
The second MX2 moto of the round saw a return to the top step of the podium for Makeham, near 10 seconds ahead of Crawford, while Ward was promoted to third when Arbon was penalised for jumping across the side of the track. He was still fourth from Kyle Webster (Honda), with Hamish Harwood (Davey Motorsports KTM), Beaton, Hunter, Rykers and Joel Wightman (Honda) rounding out the top 10. Overall it was Ward with the victory, joined on the podium by Makeham and Arbon. In terms of the championship it’s Ward who retains the red plate, followed by Crawford and Jake Moss, who was 16th in the final moto this afternoon.

Thor MX1 Moto 2:
American-based SD3 Husqvarna rider Metcalfe rose to the challenge in the second MX1 moto at Appin, making his way to the front and capturing his first MX Nationals race win. It was an impressive performance from Metcalfe, who first overcame Moss for the lead and held Waters and Ferris at bay. It was Waters who crossed the line second this time out, from Ferris and Gibbs – that trio running in succession once again. Fifth was Matt Moss in a consistent effort, the top 10 filled by Reardon, Dylan Long (Crankt Protein Honda Racing), Mosig, Wright and Wilson. Overall it was Ferris the victor from Metcalfe and Waters, while in the standings it’s now Ferris with the red plate ahead of Gibbs and Waters.

Pirelli MXD Moto 2:
The second moto of the MXDs saw pole-setter hill emerge as the victor, winning the 20-minute moto by 10 seconds from Tierney and Kirkland, with opening moto winner Evans fourth ahead of Pozniak. Small was sixth and completing the top 10 was Barham, Latimer, Abela and Silk. Overall for the round it was the second moto winner Hill who stood on the top step, joined by Tierney and Evans. In the championship standings it’s still Tierney who is in control, followed by Pozniak and Kirkland.