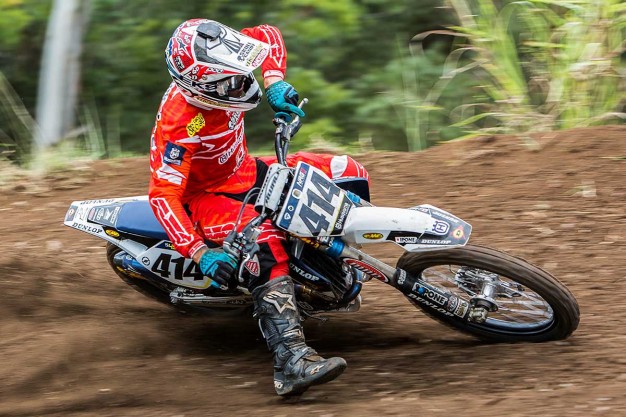 Greatest moment of your career?
Probably winning my last junior Australian title, it was in 2012 at Coolum and I had come off being injured for about a year and I had just been beat down over and over again. So to come back and finish on a high was pretty good and probably the most meaningful one out of all of them that’s for sure.

Toughest race ever?
Probably one of the Coolum national rounds, that’s pretty gnarly, it gets pretty tough doing a 30 around there. That would definitely have to be one of the toughest races that’s for sure, nothing really compares to that.

Long-term goal?
To be racing over in America. Hopefully this will be my last year here, I want to try and turn some heads and get out of here while I’m still young. I want to get overseas and hopefully be there fulltime eventually sometime.

Favourite track?
I think Waneroo is pretty cool, just because of the layout, you go into the quarry and then come back out. I love sand as well, I’m a bit of a sand rider so definitely Waneroo I think.

If you weren’t a racer, you would be?
No idea really, I don’t know anything but racing. I think boxing is cool, I’m not much of a fighter but I’ve got a bit of mongrel in me and I like the work ethic of boxing. Maybe something like that, I don’t know, not too sure.

Arch-rival?
I don’t really have one, I think we’re all rivals, but I don’t have a specific one. There was a time there when myself and Sam Martin weren’t getting along, but we’re cool now, so I wouldn’t say anyone really.

Greatest inspiration?
It’d have to be Chad Reed, he’s really the only man that’s done it and that’s something that I want to do. He left Australia at a young age and went over and took on the world, I want to do something similar but I don’t want to be the next Chad Reed at the same time, I want to be Jesse Dobson.

Superstitions?
I’m always right knee brace, left knee brace, right boot, left boot. But then I think I’m always left glove and then right glove, I’m all over the place. But just whatever’s going on the day and I ride well, that’s the new superstition, but I think everyone’s got them for sure.

Goal for 2016?
Just try and podium, I think a lot of international people will be watching with Todd [Waters] and Dean [Ferris] being back, so I’d like to be consistent and get some good results on the board. I’m just sick of filling the class and battling around top five, I want to pull a holeshot and try to pull away and show what I can really do and what I work my ass off for day in, day out. So I definitely to be a top contender this year, be smart and finish the whole year, if I do that I’ll be happy. I’m looking forward to supercross too, I really like supercross, so if we get there and I’m healthy I know I can be a top guy there as well. If I can podium in both championships I think we’ll be in a really good place with how young I am at the moment, it’ll open a few people’s eyes up for if I stay here next year or go overseas.

Best all-time moto DVD/video?
Some of the latest The Great Outdoors ones were pretty good and there was a movie called Epic from Vurb Moto a few years back that was pretty good.

Non-bike related hobbies?
Not much, I like cycling, I think that’s pretty cool, I do a little bit of that. Everything else revolves around motocross really, even cycling is to do with motocross, so yeah basically nothing (laughs).

Do you read your pit board?
Nope, half the time pit board areas are in shocking spots, I was racing Harvey Bay recently and I saw once on the pit board the word ‘looking’ and that’s all I read the whole time.

What do you drive?
I used to have a Ford Transit and now I’m in a Hiace, so I’ll be drivng that to all of the races all year which kind of sucks, but she’s alright (laughs).

What’s on the iPod?
Bit of A$AP, some house music, party beats, kind of a large range, but I’m definitely pick with my songs.

Best thing about the MX Nationals?
I think probably the competition this year is pretty deep, the 450 class from first to 10th is within one second of each other, so you’ve got to be on your A game. That’s one of the good things, but I think there’s a lot of things that could be better at with it as well.

Who will win the 2016 AMA Supercross?
[Ryan] Dungey, you can’t go by him, he’s pretty on point at the moment.

Tell us something we don’t know about you?
I cut my own hair, I hate going to the hairdressers they always cut it too short so I just do it at home and wing it.

First bike?
PeeWee 50, same as almost everyone else.

First proper injury?
Broken tib/fib and that was back in 2007, so I was only young then. I did it at Coolum, I remember crashing and went to get up and it just didn’t feel right. Dad came over, I told him my leg felt weird, he put his hand in my boot and felt it was snapped straight away. I didn’t shed a tear once though which was pretty cool.

First time you got in a fight?
Nah, no fights, I try to do my talking on the track.

Last holiday?
Mid-season break last year I went to Sydney with my girlfriend and that was pretty cool. That’s probably the only holiday I’ve ever really been on, other than that we’re just riding and it’s not much of a holiday.

Last big crash you had?
I had one at Murray Bridge last year, a massive one through the whoops. I did a wheelie in and lost the rear end, she ejected me and I ended up flying in the air, but I bounced off the ground and was sweet to finish qualifying. That’s probably the biggest one I’ve had, I normally just tuck the front in turns, that’s normally my thing.

Two 30-minute motos or mixed formats?
Two 30s for sure, I definitely think it’s the way to go. Everyone else is the world does it and I think if you’re mixing it up it’ll hold people back going overseas and not being used to doing two 30s.

PC or Mac?
Mac, but I have a PC because I can’t afford a Mac (laughs).

McDonalds or KFC?
They’re both crap, but maybe KFC.

Blonde or brunette?
I’m kind of confused there, I thought I was a brunette man, then I thought it was the blondes, but now I’m definitely a brunette man – that’s what tickles my fancy.