Check in with the factory Husqvarna off-road rider and manager.

Glenn Kearney is a man of many talents. He’s fast in the bush as a multiple Australian Off-Road Champion, quick on a motocross track and even performs well as a team manager. The Husqvarna Enduro Racing Team rider and manager has made quite a few changes to his program for 2016, so MotoOnline.com.au caught up with him this week to see how everything is panning out to date. 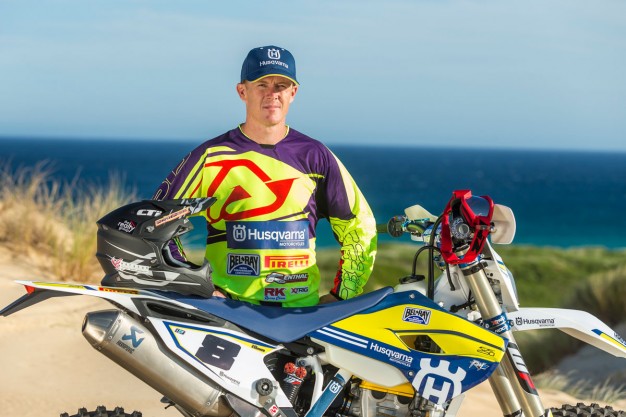 You’ve made the move from the E3 class back to the E1 class for 2016. Can you explain the reason behind that switch?

We wanted to cover all of the classes in 2016 and we’ve only got two riders. I wanted to put someone in the E1 class and so did Jeff [Leisk] to promote the FE 250. Lachy Stanford is better on the big bike, he proved that last year at the Six-Day, so I thought it was best to keep him on that since he’s the guy that we’re looking to make a move and get right up the front. I’ve had success on the little bike a few years back with Husqvarna, so I thought it’d be a good idea to go back down to that bike – it’s probably more suited to my size anyway. Also with all my issues last year with the rear brake, due to my fused ankle making it harder to get the bike stopped, it kind of makes sense riding a smaller and lighter bike. That’s proven to be the point so far and I’ve had a lot better results in terms of pulling up and getting into corners with the limited use of rear brake I’ve got.

As you mentioned, you have an ankle injury that limits your use of the rear brake substantially. What exactly is the extent of that injury and what are some of the ways you’ve tried to get around it before returning to the regular foot pedal system?

I suffered the injury in 2006 while I was in the US, I had a compound fracture and dislocation of the ankle along with a tibia and fibular break. It was never very good after I had surgery on that, but it worked fine, but I ended up suffering from osteoarthritis in the joint. That got to the point where I was having trouble just getting around, so I had it fused around 18 months ago to stop the pain in the ankle joint. Last year was a struggle because of the issues trying to just press the rear brake. I went through different stages, I used a Rekluse hand brake thing on the handlebar and clutch separate, then I used a Clake system which is a clutch and rear brake on the handlebar. We then ended up building our own thumb brake with a dual caliper on the rear so I could still use the pedal or the thumb brake. In the end, I got quite good at using all of them, but when you’re in a race situation there’s just too much going on to go at the speed needed to be competitive. So this year we’ve gone back to using just the rear pedal and I spent a long time with no rear brake on the bike just trying to change my technique to not use so much rear brake. It’s been difficult, but it’s coming around, I guess we’ll see at the first round, I’m trying to ride with less rear break than I ever did. I can use the rear brake, but with not much feel, so I either stomp it with my whole foot and lock up the rear, or I use not enough. I’m trying to find the happy medium.

Following the switch to the 250 and the return to the traditional rear brake system, how are you feeling on the bike currently ahead of the 2016 season?

I’m feeling really confident, I’ve got a lot of test tracks around my area that I always ride and I have times from those tracks that are my personal bests. Last year I couldn’t get near the times I set in 2014, but already just this year I’m right on track with those times so things are looking really good I’m really confident. 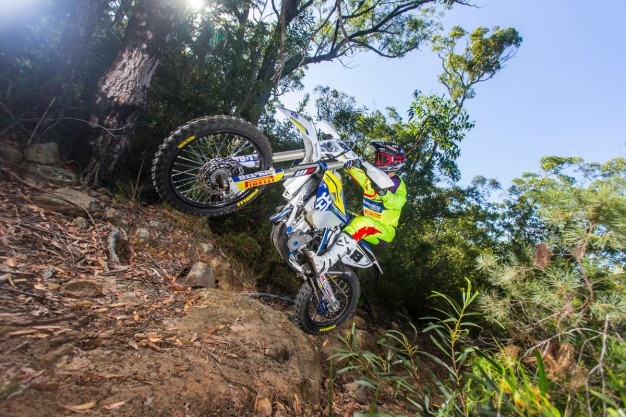 You’re returning as both team manager and rider for 2016 and you’ve obviously got a lot on your plate. How does that work out for you? It’s a challenge you seem to enjoy.

It’s something I do enjoy doing and at this time of the year there is a lot going on with organising things for the whole year. This time of the year everyone is under the pump, but the more I get done now, the better it is for the rest of the season. At the age I’m at and the point I’m at in my career, I’m also looking to move into something other than just racing all the time. So that’s why I want to stick with the team manager side of things and possibly look at more roles with Husqvarna down the track.

Part of your job as team manager is dealing with sponsors and for 2016 the team has an all-new look with Acerbis gear from the guys at Off Road Imports. After wearing Husqvarna branded gear for quite some time now, you must be excited to unveil the fresh look for the new year?

Yeah, that’s something I’m pretty excited about. We’ve ran the genuine Husqvarna gear the last couple of years, which is great stuff and represents the brand really well, but this year we’ve had the opportunity to go and use something else, so Acerbis and Toby [Andrews] at Off Road Imports were all about trying to get us in their gear. As soon as I saw the gear and tried it on I was pumped – it fits really nice, it’s comfortable and it’s pretty out there with the colours they’ve used. It will really make a good impression and we should stand out in the crowd, that’s for sure.

Obviously everyone wants to win, but being a new season, with new classes, new bikes and plenty of changes happening, where would you like to see both yourself and Lachy at the end of the 2016 season from a team manager standpoint?

Like you said, everyone definitely wants to win, so we’ll be disappointed with anything less than that. We’ve just had the 12-hour race which was a good little shakedown, we finished second to the KTM team there, so that was good. We’ve got the Clipsal 500 Enduro-X next weekend in Adelaide, so we want to get through there unscathed and then we’re starting to get to the major AORC races. We’re both looking to win our classes, but like I said, with the testing I’ve been doing and my times being on pace, I’m out to try and get the AORC championship. No less. And really I think Lachy will be right there with me, he’s made some progress in the off-season and it’s time to step up.