Five Questions Why with the Husqvarna-backed MX2 contender.

Nathan Crawford put together a strong rookie MX2 season in 2015, scoring podiums and even a race win over the course of the 10-round MX Nationals schedule. But unfortunately for the Queensland rider, injury struck at the second round of the 2015 supercross series, forcing the Husqvarna rider to the sidelines for the remainder of the season. MotoOnline.com.au caught up with Crawford today to hit him with a selection of questions on a range of topics in this latest edition of Five Questions Why. Why did you miss the majority of the 2015 supercross series?

At the second round of the supercross series I was running third in a heat race and made a mistake before the triple, I kind of half committed to it still and didn’t go off the up ramp very straight. I came up short and ended up breaking both the bones in the bottom of my leg, so that put me out for the rest of the season. I only just got back on the bike around two weeks ago after that injury.

Why is the Husqvarna FC 250 four-stroke the bike of choice after riding a two-stroke in the past?

For myself and my Dad, the first year we rode the two-stroke because it was just financially easier for us to go racing on a that bike. We did get help from Husqvarna in 2014, but now we’ve been getting a lot more help from them and we’ve been able to ride go racing on the four-stroke. Because obviously there is a lot more maintenance involved and if something goes wrong it costs a lot more money. So in 2014, it was my first year of seniors and that was why I rode a two-stoke, just due to the budget.

Why do you continue to work with Ken Wheeler at Factory Spec suspension even though they’re a Sydney-based operation and you’re in Queensland?

Even though he is Sydney-based, he definitely makes life easy. This is our third year with Kenny and we’ve built a great relationship with him. We’ve figured out over the past three years what I like and we both work together to make a really good setting and have my bike handle the best it can. He is in Sydney and a little bit of driving does happen here and there, but when you have that relationship with someone like Kenny it’s all worth it. 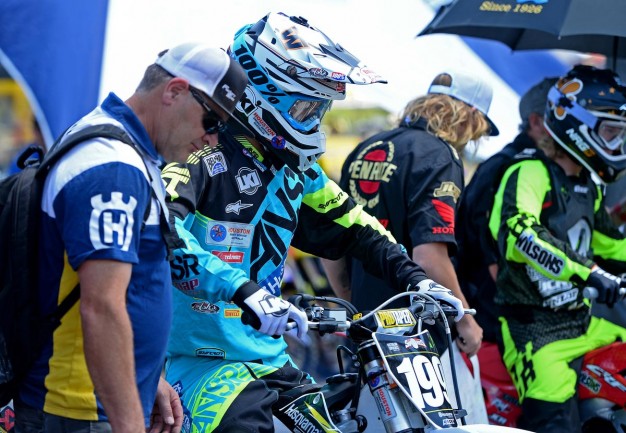 Why is training with Jake Moss beneficial to you?

Jake’s been around forever, he’s been to America, he’s raced with the big guys and he knows what it takes. So it’s good to have someone like that around me all the time, it just puts me in a good state of mine. Now we’re actually racing together in MX2 it makes it a bit more competitive to want to beat one another. It’s still in a good, friendly way, but I guess when we get to the track nobody is friends. But it’s been really good having us together training and riding, it pushes us both to better ourselves everyday.

Why can we expect you to be a strong contender for the 2016 MX2 title?

Last year was my rookie year and I definitely wanted to do better than I did. I did get a couple of podiums and a race win, but I definitely learnt a lot. This year I’d like to say I’ll be 100 percent at the first round, and I believe that is achievable. I’ve only been back on the bike for two weeks, but I think the work I’ve been putting in prior to getting back on the bike will pay off, now I’m just getting bike fitness and set up on the bike. I just believe my mindset is different this year and my equipment is going to be unbelievable. So I feel that’s why I should be a strong contender from the first round, all the way through to round 10 – that’s my ultimate goal.