Jordan Hill entered his rookie MXD MX Nationals season in 2015 coming off the back of a junior SX2 Australian supercross championship, a clear career highlight. Hill came out firing winning an MXD moto on debut before an unfortunate string of mechanical issues hindered his overall championship result.

As the season wrapped up at Coolum’s 10th and final round, the 17-year-old would see himself finish seventh overall in points. His overall finish was still quite strong considering the amount of bad luck he suffered during the season, but in the form of a true racer, he wasn’t satisfied with the result.

“The year was a bit up and down, I had good rounds and average rounds,” said Hill. “The thing that messed the year up for me were the DNFs I had. I did podium at a few rounds and took a moto win at the opening round, it was just the six DNFs due to mechanical problems that really hurt me. I feel like I could have been in the top five overall at the end of the season otherwise.”

Following a rollercoaster rookie motocross season, Hill picked up a ride with the GYTR Yamaha team for the supercross season. After running a privateer effort with his father and select sponsors for much of the season, the move to the Yamaha-backed squad was a welcomed change for the young rider.

“It was awesome, it’s so much different being in a team environment and having everything done for you,” Hill explained. “The bike was great straight away, it didn’t really take much to get used to so I was good to go there.” 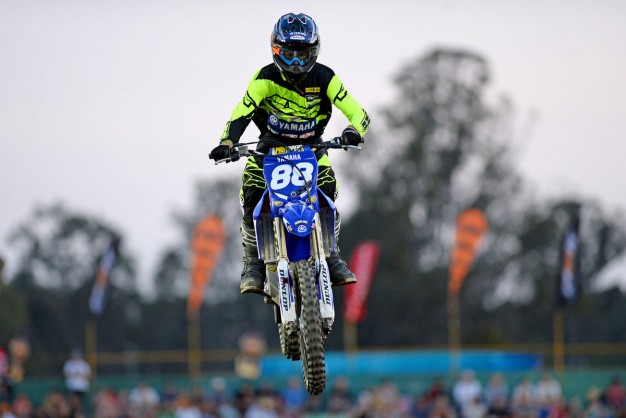 Unfortunately for Hill bad luck found him once again. Following a strong start to the season with a second place finish at round one, Hill took a hard fall during mid-week training and suffering severe internal injuries.

“I lacerated my kidney, had internal bleeding and spent four days in hospital,” he said. “I shouldn’t have raced the rest of the season, but I did it anyway and ended up sixth overall.”

The determined New South Wales native finished the season strong after missing one round due to his injuries. Hill came back to capture a round win followed by a second place finish to wrap up the year, these results were enough for the GYTR Yamaha crew to offer him a full-time 2016 spot on the squad.

The GYTR Yamaha team, now the Yamalube Yamaha Racing team for 2016, is held in high regard within the development category. Headed up by former professional racer Scott Bishop, Hill already feels comfortable and at home with the whole Queensland-based operation.

“It’s really professional the way Scott Bishop runs it,” Hill said. “It’s going to be such a massive help for myself and my Dad, in regards to the bikes and the travel. I love the bikes, I get along really well with Mitch [Evans] and the rest of the crew. It creates a good team environment and I’m hoping for a successful year.”

Recently relocating from Western Sydney to the Sunshine Coast, Hill now has the convenience of living within an hour of the team’s base. Already taking advantage of that in pre-season testing, Hill admits the 2016 bike is already leaps and bounds ahead of his 2015 machine.

“Living only an hour from the workshop is good, we did some suspension testing last week and I’m really happy with how the bike is handling and the power also,” he explained. “The bike has a lot more power compared to my supercross bike last year and living so close it’s so easy to try new things on the bike which is great.”

Hill is taking his pre-season approach seriously for 2016, currently spending a month with KTM Motocross Factory Racing’s Caleb Ward in Cairns in preparation for the season opening round on 3 April in Victoria.

“I’m up here at Cairns for a month putting in the motos,” he said. “Then I’ll come back to the Sunshine Coast in March for some more engine testing, and then we’ll go racing in April.”

With a year of experience under his belt, a strong pre-season program and arguably the best team in the development class behind him, Hill is making it no secret that he’s out there to win in 2016.

“I just want to have a solid season and hopefully as a result of that it means I’m on top at the end,” he added. “I want a consistent and strong season of being on the podium – the overall plan is to win it.”