A range of topics with the NPE Monster Energy Kawasaki recruit.

Coming off one of his most impressive seasons to date, Kade Mosig made the switch to the NPE Monster Energy Kawasaki squad for 2016. The team, headed up by Troy Carroll, is based out of Queensland which means the Victorian will be on a new brand and in a new state for the upcoming season. MotoOnline.com.au checked in with Mosig to get his thoughts on a range of topics as he prepares for the season opening MX Nationals round on 3 April. 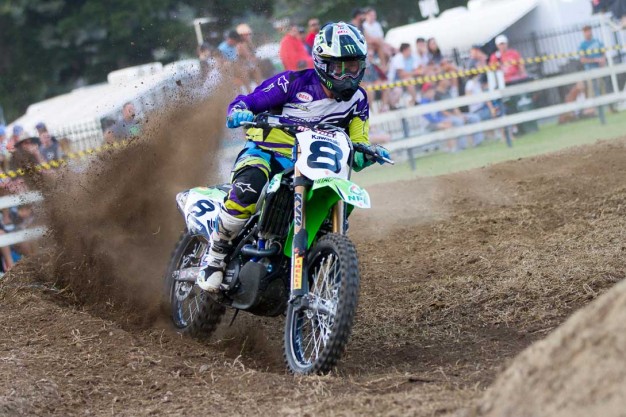 So far so good with the new Kawasaki KX450F, I’ve really found adapting to the bike to be very easy. It’s such a nice bike to ride and I think I definitely am going to be able to take my riding to a new level because the bike will allow me to do that.

The switch to the NPE Monster Energy Kawasaki team…

The switch has been great, I’ve worked with Troy Carroll and his whole crew before so it’s not unfamiliar. All the sponsors and the guys supporting the team, it’s such a great environment and I think it’s going to be an awesome team to be working with all year. I’m moving into my house next week in Queensland, I’ve spent a lot of time up there and I love it up there. I love the lifestyle and I have plenty of new tracks and new spots to ride, it’s good to keep it fresh for me. I get to spend a lot of time out at Jacob Wright’s place too. We’ve put some hours in on the machinery out there so we have a really good setup that we can train on whenever we want which is good.

It’s really good to see for Australian motocross, such a prestige field, I think it’s going to make for some really good racing this year. For me it doesn’t really change my mindset, just still striving to achieve my goals. I’ve raced all of these guys over the years and it’s nothing new for me, so I’ll just focus on what I’m doing and I’m looking forward to round one that’s for sure. Off the bike training methods…

I take my training really serious. I’ve been with a new trainer for a couple of months now at Burleigh Heads. It’s called Momentum Sports Performance and my trainer there is helping me take my strength and fitness to another level so that’s been good, I’m really enjoying being in the gym with my trainer Wade. Other than that I do a lot of road cycling, surfing, mountain biking and the Gold Coast is the perfect spot for that – I’m really enjoying my off the bike training.

Heading back to Western Australia for the MX Nationals…

I think it’s great, I feel that it’s awesome to get over to the west coast of Australia, I like it over there. I’ve raced over there for many years now and it’s definitely a man’s track over there. I’ve grown up riding the sand so I’m looking forward to getting onto something that’s super rough and gnarly. Those kind of tracks definitely separate the men from the boys, so when we head over it’ll be interesting to see what happens. I’ve got a couple of sponsors over there so it’s always good to see Ant from Berry Sweet and the crew, I can’t wait.