As the 2016 Australian motocross season looms and all the major team seats are filled, there’s one guy who’s found himself on the outer and is set to walk away from the sport, despite finishing third overall in the 2015 MX Nationals MX1 championship. 27-year-old Adam Monea is currently rehabbing after his massive crash at the AUS-X Open and MotoOnline.com.au caught up with him to find out exactly where he’s at and what the future holds. 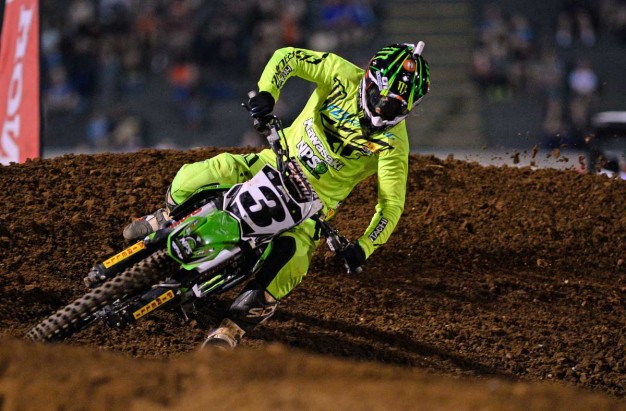 Righto, Monz, you’ve been pretty quiet since your crash at the AUS-X Open. What’s been happening?

Yeah, I had a big crash in qualifying at the Sydney supercross that came at pretty much the worst time possible from a contractual point of view. During qualifying had this really funny feeling where it felt like the lights in the arena were messing with me and it go so bad I even ditched my goggles for the last couple of laps so I could focus on putting down a good time. I wasn’t hitting one of the big sections and I had Cooper Webb in front of me and I went to quad the tabletop but tagged it with my rear wheel and that pushed me over the front of the bike and I just ejected over the next jump and went down hard. I knocked myself out, messed my wrist up and busted and dislocated my thumb. So that was me double-casted for a few weeks over Christmas. I got the pins out of my wrist yesterday after 10 weeks so it wasn’t pretty. I’m definitely relieved to get them out and not having to rely on the missus to open my water bottles anymore [laughs]. I think what really sucked the most is I was having the best year of my career. I had five podiums and third overall in the MX Nationals – even though I didn’t necessarily enjoy it some days and I worked through that – and had podiumed in supercross as well. It was a bit shitty to end the year on my head.

What do you mean you didn’t enjoy racing this year?

Look, I’m not one to shy away from hard work and pressure situations and we’re told as riders that we need to do well every time we’re out there. Whether you like it or not it soon becomes something you have to treat as a job; I’m lucky that I enjoy my training and working out to get there, but there were times when the fun disappeared. After a bad weekend it’s not necessarily motivating to get back out there and smash it again on a Monday morning. I’m not being a whinger and I’ve never taken this opportunity for granted as this was already my second chance at racing – not many people get given that.

So now all the teams are full for next year and your spot at NPE Monster Energy Kawasaki has been filled with Matt and Jake Moss and Kade Mosig. Where does that leave you next year?

Well, nowhere! My injury came at the worst time, as no-one wants to hire an injured rider. There were some communication mix-ups that went down that didn’t help either. A couple of weeks before supercross started I was up in Queensland testing and had a handshake agreement in place with Kawasaki, was told a contract was on the way and that I was safe. That’s when everyone else was out fishing for next year’s gig, so I wasn’t exactly putting my name out there. Then the Friday before Wayville supercross I was told I wasn’t necessarily safe and that left a bitter taste in my mouth and I felt like I’d been lied to. Then soon after I was hurt and from then on my phone didn’t ring. So you haven’t received any phone calls at all?

Nothing. Maybe word got out of what I was kinda asking for salary-wise and that turned people off, or maybe it was my bitchy resting face and always being portrayed as a stand-offish guy, I don’t know. But motocross is so dangerous and gnarly and I don’t want to be doing it for any less money than I was on, and I was one of the better paid riders. It was nowhere near six figures or anything, but anything less isn’t worth it and you can’t afford to ride motorcycles four times a week on public tracks where you have to pay the same as the locals, all the insurance, car loans, hospital bills when you’re injured, day-to-day life and everything else. I’m 27 now, me and the missus want to move on with our lives and honestly offers of $20-30,000 just aren’t going to cut it. The value of the rider now is so low compared to what it used to be and it’s hard to swallow. At the same time we’re still expected to be professional, say the right thing, do this, do that, be here, sign this, but here’s a wage that doesn’t reflect that professionalism. The pressure on riders is immense too – if you’re out there getting seventh place finishes you’re not secure, people are pissed off at you and it’s not a nice feeling.

You and Kade have always been good mates, seeing as you grew up practically next door to each other. Are there any bad feelings between the two of you now?

I’m not bitter at all. We’ve ridden beside each other for as long as remember and I honestly wish him all the best. He’s one person I want to see do well. Yeah, we’re fierce rivals behind the gate but afterward we’ll always congratulate each other and be genuinely pumped. He did so well last year and deserves a paying ride. He’s one of the guys I’ll be barracking for next year, as well as a couple of others.

Where does that leave you for next year then?

I’ve had to really evaluate things. I value myself as a professional so I won’t go racing for a figure that’s too low, or with a team that I don’t believe has the right equipment – that would just be short-changing myself. You know, I wasn’t out there to win a championship for Kawasaki, I was there to do it for Adam Monea. I value my work and I need to believe in what equipment I’m using. There’re only a few rides out there that I could do that with. It seems crazy that a guy who ran third in the MX Nationals championship last year hasn’t got a ride for 2016. Is that a case of bad luck on your behalf or more an insight into the state of Australian motocross at the moment?

It’s hard to say… It’s such an expensive sport and there are always things cropping up that make it more expensive. At the same time the sport isn’t dying off and you can go to the local club day and there’ll be 400 dudes out there. They’re just not there on Sunday’s race day and that’s hurting the industry. What’s also hurting is the fact that mums and dads are spending so much on these kids coming through, so the first time they get the chance to ride for any sort of money, or even to just bring their bikes to the races for free, they’ll jump at it because they’re desperate. Then suddenly that sort of thing becomes the norm and everyone thinks it’s OK to pay riders stuff-all. It’s comes down to where you value yourself and standing firm for that.

So is that it? Is that your MX career over for good?

Professionally, yeah. I’ll never stop riding motos though. I loved them the first moment I laid eyes on them and I’m lucky to be good at riding them. I can’t see myself going back to professional racing with the way the industry is though. There are things I do want to do though – I’m very attracted to Hattah and the Ironman events where you’re riding for six hours and not for some 15-second Insta-banger. Maybe some mountain-biking or downhill racing. There’re so many things I want to do and I’m now in the position where can start looking at them.

Hey, you could always go back to concreting.

[Laughs] f**k that, hopefully the grey gold and I stay far apart! When my wrist has stopped jamming up, which could still be four months away, and I’m all healthy I have goals in life, but we’ll have to wait and see what those opportunities are, but I could see myself getting into the excavation business. One thing I learnt about this return to racing is that being a good human is one of most important things in life, far moreso than twisting the grips.

Well the track’s not going to be the same without you there, mate. We’re gonna miss seeing you on the gate. All the best for the recovery and your future endeavours.

Thanks mate. Keep in touch.