If you’ve been keeping a close eye on the 2016 Monster Energy AMA Supercross series so far, you’ll be well aware that Australia’s Hayden Mellross has had a positive start to the Western Regional 250SX series as part of the 51FIFTY Energy Drink Yamaha squad.

Mellross, still just 20 years of age, made his way through the junior ranks as a well-known racer, capturing plenty of wins and titles along the way. Just like many of his fellow competitors, he had dreams of making it to America to race the best in the world with a professional team and that dream has finally come true.

Last year saw Mellross make his debut on the US scene during the Lucas Oil Pro Motocross Championship, after a string of injuries saw his Supercross hopes go down the drain early in the season. After getting his feet wet in the outdoor series, Mellross locked in a deal with the 51FIFTY Energy Drink Yamaha team for 2016 to contest supercross on the west coast and, at this stage, select rounds of the outdoors.

Mellross kicked-off his American Supercross career with a bang inside Anaheim’s Angel Stadium two weeks ago, racing to an impressive 11th overall in the stacked 250SX class on debut. It was an encouraging way to arrive in supercross at the pinnacle of the sport.

“Anaheim’s season opener was pretty sweet,” Mellross said. “It was really an eye opener, I’ve never seen anything like it before. I got a good heat race in and the main event went real well, I just finished outside of the top 10 for my first AMA Supercross ever, so I couldn’t complain about that. I was quite pumped with it.” 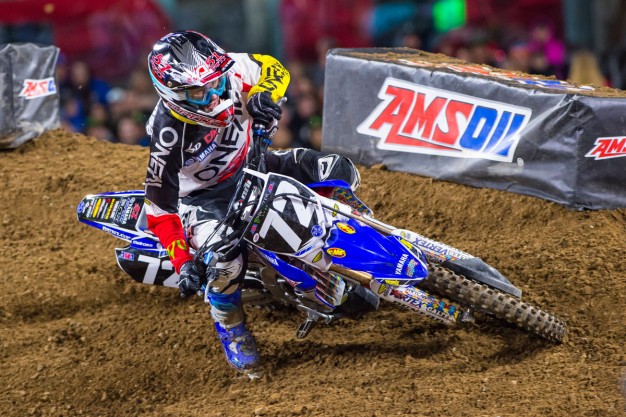 Heading into round two of the championship in San Diego, Mellross felt the weight was off his shoulders, admitting the first round nerves were now gone. Unfortunately following an impressive fourth place heat race finish, his main event didn’t go as he would have planned.

“I came into this past weekend with a solid week of training, which was great,” he continued. “There weren’t as many nerves, it was round two and the pressure was off. I got off to a great start in my heat race, I was in third for most of the race and Jimmy Decotis got by me. I rode solid and was able to hang on for fourth, which was a great result for me considering where I was a week before.

“The speed in the heat race was pretty good for myself, I was only a second off the fastest time, which was awesome and a big improvement. In the main event I almost got the holeshot again and I was second around the first couple of turns. Being a rookie I made the mistake of leaving the door open for a few riders and paid the price. I got pushed wide, hit a tuff block and ended up off the track.

“When I was re-entering the track I had a little crash and then I had another little crash later in the race again. It wasn’t the result I wanted, but there are still plenty of positives to take away from the weekend. A lot of good things happened and it’s definitely a step in the right direction for me.”

Supported by 51FIFTY Energy Drink Yamaha and a selection of personal sponsors, Mellross has a solid structure beneath him and his 2016 efforts also go towards supporting a great cause thanks to team owner Carlos Vieira.

“Our team is a very new team. The owner Carlos Vieira founded the team just a few years ago,” said Mellross. “His main passion is a racing for autism foundation, he started the 51FIFTY race team to try to raise awareness for the situation, which is awesome.

“We’ve got a great base, we have a few mechanics, a suspension tech, manager, everything. It’s a great structure, the bikes are super-fast, we’ve got great help from Yamaha and a few personal sponsors of my own which is great. So overall it’s just an awesome team to be involved with.” Although the Young, New South Wales, native is racing the Western Regional 250SX series, he bases himself in Florida where he trains with longtime factory star Tim Ferry – himself a former 125cc supercross champion on the east coast.

“I’m based in Florida, where I train with my coach Tim Ferry, but for these next couple of weeks I’m just staying in Anaheim to make it a little easier getting round to round,” Mellross explained. “In another two weeks I’ll head back to Florida to get some solid training in for the second half of the season.”

Following a string of setbacks leading up to this point in his career, Mellross feels it has worked out for the best and looks forward to the remaining rounds and the possibility of mixing it up with the world’s best 250SX contenders.

“I’ve been waiting for this moment for a few years now,” he added. “I’ve had a few setbacks and it has actually turned out to be better. To be here is unreal, it’s an amazing series with a lot of great support behind it and it’s just awesome to see myself finally be a part of it. Not just to be there, but I feel in these next few rounds I can be in the mix in every race as well, which makes me even happier.”

With the possibility of an extended 2016 motocross campaign for the 51FIFTY team on the cards, Mellross is remaining focused on the task at hand at this stage of the season.

“It all depends on the results we get this season to see if our team sponsors want to stay on board and do the outdoors,” he added. “The plan is to do the first three rounds and if it all goes to plan I could possibly do a few more, but first thing’s first we need to focus on getting the job done in supercross. That’s all I have to worry about at the moment and I’m just looking forward to doing some more racing.”