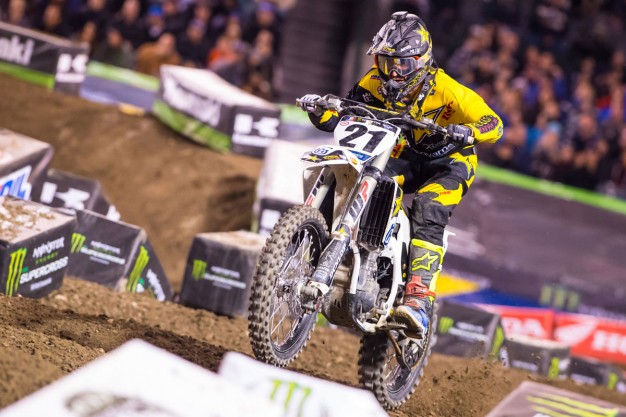 Rider: Ken Roczen
Rating: A
Rundown: Ken Roczen’s fifth place finish doesn’t look that great on paper, but with the night he had in Anaheim, it’s quite a strong finish for the German rider. The RCH/Soaring Eagle/Jimmy John’s/Suzuki Factory Racing rider had a wild crash in his heat race right off the start, somehow coming out unscathed, but forced to line up for the semi. After qualifying out of the semi, Roczen then went down in turn two of the main event before putting in a strong ride from last place to fifth place as the chequered flag flew. Not bad at all.

Rider: Chad Reed
Rating: B+
Rundown: Unveiling his all-new Monster Energy/360fly/Chaparral/Yamaha Factory Racing outfit at Anaheim 1, there wouldn’t have been many out there expecting Reed to blow everyone out of the water. Past seasons show the Australian needs time to get the ball rolling, especially with an all-new setup, but once the ball is rolling and he feels comfortable, Reed is a credible contender for main event wins. His sixth place finish at round one is a solid base to work from heading into the remaining 16 rounds of the 2016 championship. 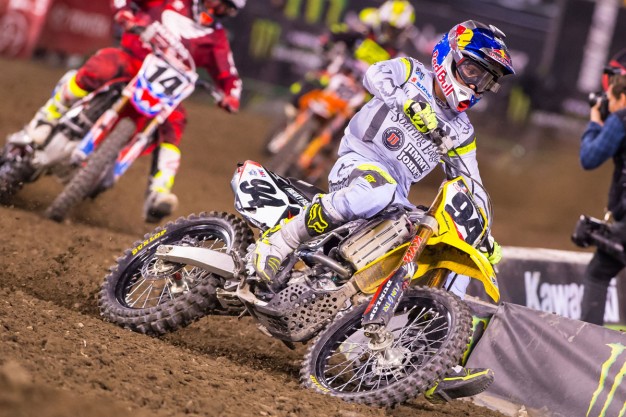 Rider: Ryan Dungey
Rating: A
Rundown: Usually flying under the radar on his way to consistent podium finishes and wins, Red Bull KTM’s Ryan Dungey had quite the opposite Anaheim 1 main event. Dungey first collided with James Stewart in a 180-degree bowl turn on lap two, which caused the race to be red flagged, then was taken down by Trey Canard on lap three. The defending champion responded in true Dungey form, remaining calm and systematically making his way through the field resulting in a strong second place finish for the night.

Rider: Jason Anderson
Rating: A+
Rundown: Jason Anderson put together an amazing performance at A1, there’s no denying that. The Rockstar Energy Husqvarna Factory Racing pilot started outside the top five and quickly began to lay down lap after lap at a blistering pace. In what seemed like a 2014 repeat, Anderson yet again chased down former 250SX rival, Team Honda HRC’s Cole Seely, and made the move for the lead during lap 13 of 20. If Anderson can maintain his Anaheim for throughout the 2016 championship he’s sure to be a hot favourite to contend for the 450SX title.

Rider: Trey Canard
Rating: B+
Rundown: Although his result on paper doesn’t quite match up to his regular stats, Team Honda HRC’s Trey Canard put together a strong performance during the season opening round. The Oklahoma native made moves to the front of the pack early, passing the likes of Ryan Dungey and Justin Barcia, and looked comfortable doing so. Running into trouble late in the race, Canard found himself wrapping up the night with a seventh place finish. 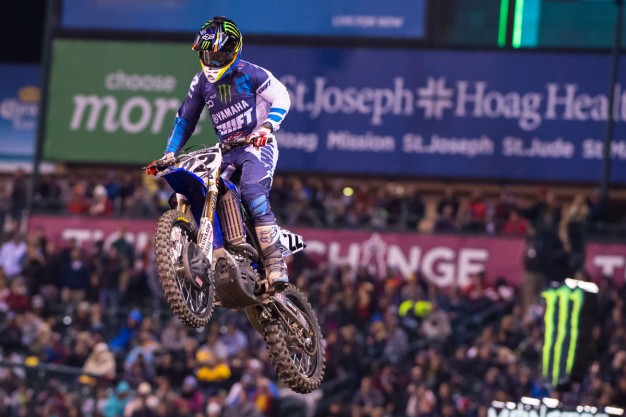 Rider: Justin Barcia
Rating: C+
Rundown: Barcia looked fast and comfortable, but not for long. The Autotrader.com/Monster Energy/Toyota Yamaha rider saw himself up front early battling with the leaders before fading severely all the way back to a sub-par 15th place finish. Barcia has commented since the event mentioning he rode tight and battled with arm-pump for much of the 20 lap main event. Don’t be surprised if Barcia tackles this issue and comes back swinging in San Diego.

Rider: James Stewart
Rating: B+
Rundown: On return from a lengthy suspension, Team Yoshimura Suzuki Factory Racing’s James Stewart was looking great. The former series champion was riding clean, smart and fast, transferring into the main event with ease. In the final Stewart was looking like a threat to take out the win before Ryan Dungey collided with him as he cut down to work on a move around eventual winner Jason Anderson. Stewart may have laid down minimal laps during Anaheim 1, but he sure did look solid doing so.