Checking in with the Australian following his first US main event experience.

Following a strong 2015 Australian Supercross season, DPH Motorsport’s Lawson Bopping decided to head stateside for the first six rounds of the 2016 Monster Energy AMA Supercross Championship. Although Bopping has previous experience within the series, he was yet to make a 20 lap main event, but this all changed over the weekend inside Anaheim’s Angel Stadium during the season opener. Read on to hear how it all went down. 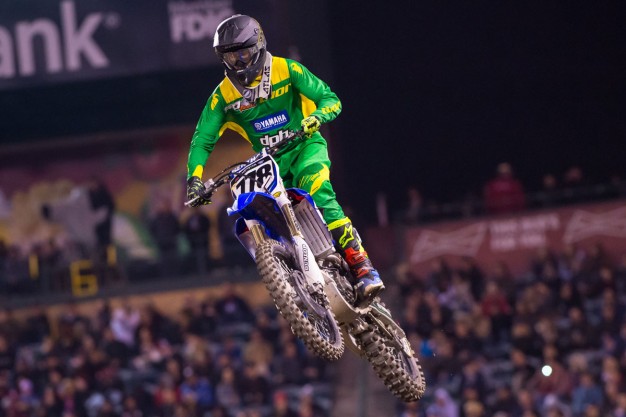 Anaheim 1 was a good event for you. Tell us about your weekend and how it felt to be back racing in the US?

Yeah it was, it was a great weekend. It was a big effort before hand to get ready for it all, we had a lot of rain before the race so we didn’t get a lot of bike time. The day went well, I was in C practice because I hadn’t raced over here for a while, but I topped that in all three sessions and I think I topped the B practice as well. In the first heat everyone from the inside pushed to the right and I got caught up in that big crash with [Adam] Enticknap, [Ken] Roczen and a bunch of other riders, so that was a bit wild. I got back up and then had another little tip over by myself, but it was all good and I think I ended up 11th in that one. The semi was probably my favourite race of the night, I got a decent start around fifth and then a couple guys came off in front of me and I was running third for most of the race. At the very end I got passed by Davi [Millsaps] and [Christophe] Pourcel on the last lap and I was still in a qualifying position, but on the very last turn [Broc] Tickle squared it up and just got me on the line which put me in sixth, I couldn’t believe it, but it was still an awesome race. In the LCQ I got another good start, around third place and then I passed [Vince] Friese and got second behind Wil Hahn, so that was really good and it put me into the main event. I came in after that race and noticed I had blown a seal on my water pump and it was leaking coolant. So the guys I’m staying with were working on my bike and they went to the Rock River truck and got an O-Ring off them and I literally ran to the line and just made the main. By that stage I was pretty wrecked from running in my gear from the pits to the line. Before the restart I was running around 15th and battling with some guys, so that was good. After the restart I got a decent start from being so far outside, but I only had about five or six good laps in me and then I was basically cruising from there. It was awesome to make the main, that was a great achievement for me, but once I got there I didn’t have much left in me. Hopefully next weekend will be better, possibly making it through in the semi or something like that. The field is so stacked, I looked through and there’s about 16 AMA champions in the race, and then we’ve got guys like Tommy Hahn, Justin Brayton and then myself. It was still an awesome night, I had so much fun and the tracks are awesome to race on, I’m really looking forward to the next couple of rounds. Exactly when did you make the trip to the US with your own suspension and select engine parts before going ahead and buying your own Yamaha YZ450F?

It was exactly two weeks from when I got here until I raced round one. I tried to organize a bike over here in the US through Yamaha Australia and unfortunately they said they couldn’t get me a bike, so I figured worst case scenario I’d buy a bike. I was talking to people over here trying to find a good second hand race bike, but at this time of the year nobody had anything, so I ended up getting a bit of a deal through Langston Motorsports and I had brought my suspension, head, barrel, ignition, pipe and plastics with me. It’s not exactly the same as my bike back home, but it’s not too bad. I’ve only got the one bike though, so I’m practicing and racing on it and my bike got pretty beat up over the weekend, so hopefully it gets me through – we’ll see how we go.

As you said, there was a lot of rain in the lead up, but it ended up dry and seemed like a pretty technical start to the season?

For sure, it was way more gnarly than anything we’ve raced on in Australia within the last three years. Especially in practice, it was the worst because we were in C practice which means the track is beat up being the last guys out there. It wasn’t so much the up ramps being rutted, it was in between the jumps where it was really spongy. Everything’s also a lot steeper than anything we have back home, TV doesn’t really do it justice. But in saying that, I liked it, I really enjoyed the track it was good. Especially when the night show comes around, the track builders go out there and prep it up, so it was pretty good for the night show. The section before the finish was really rutted, I kind of struggled there a lot. The whoops were fine, they weren’t really big, so it was challenging but at the same time it was fun once you had it down. 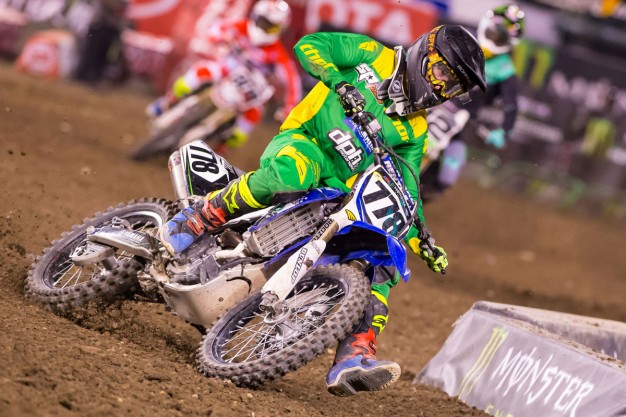 So the plan is to do the first six rounds and then head back to Australia with DPH Motorsport for the 2016 season?

Yeah, that’s the plan so far, I’m just here to do the first six rounds and then see where I end up.

You’re also in Thor gear now, which is a bit of a change for you.

DPH Motorsport recently switched to Thor the week before Anaheim, so that’s cool. The Thor guys back home organised it over here, so it all got sent straight to the house I’m staying at and I’m also wearing Alpinestar boots. Steve Jennings from Monza Imports organised the Alpinestars deal, but I actually have a friend here who works for them over here so he delivered them to me over here. The guys from SPY over here also hooked me up with some goggles, which was awesome. It’s been good, I don’t have too many sponsors over here, but we’ll see what happens the next couple of rounds, everyone has been super nice to me so it’s been great.

Well it was definitely good to watch you out there and we look forward to seeing your progress over the next few rounds.

Yeah I’m looking forward to it, hopefully they’re good ones!