Back again for a seventh consecutive year are the MotoOnline.com.au Moto Awards, where we name the stars of the season past in a reflection of Australian and international racing. MotoOnline.com.au’s Moto Awards are done purely for entertainment purposes, pieced together via what we witnessed during the year both within Australia and abroad. 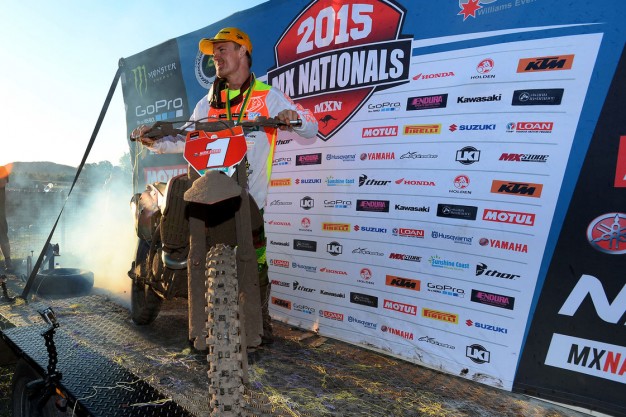 National Rider of the Year – Kirk Gibbs:
It’s been a long time coming, but Kirk Gibbs finally clinched an Australian championship in this year’s premier MX1 ranks of the MX Nationals. It was a huge result against a stacked field of our best domestic racers, even more amazing considering he almost lost his life at the same Coolum finals three short years ago.

International Rider of the Year – Ryan Dungey:
With titles in the Monster Energy AMA Supercross and Lucas Oil Pro Motocross series, Red Bull KTM’s Ryan Dungey was a new man of sorts in 2015. He’s always been incredibly strong with titles to his credit, however armed with a new 450 SX-F and Aldon Baker in his corner, the Dunge was on a mission indoors and out.

Off-Road Rider of the Year – Toby Price:
He started the year with an amazing Dakar Rally podium much to everybody’s surprise on debut, then went on to dominate the Australian Off-Road Championship, Finke Desert Race and Hattah Desert Race. Next year he’ll focus on his international rally career.

Rookie of the Year – Romain Febvre:
Nobody predicted factory Yamaha rookie Romain Febvre to win this year’s MXGP World Championship against the likes of Ryan Villopoto, Antonio Cairoli and many more proven champions. Yes, many top guys were injured along the way, but we’re betting the flying Frenchman will go back-to-back in 2016 regardless of who’s behind the gate this time.

Personality of the Year – Cooper Webb:
There’s something strikingly refreshing about Cooper Webb, the American Western Regional 250SX Champion who has a knack for saying things how it is, while still maintaining world-class professionalism. Chatting to him first-person at the AUS-X Open in Sydney, he’s an all-round cool guy as well.

Race Series of the Year – MX Nationals:
It’s a solid series that delivers great moments every year in Australia. Spanning 10 rounds and with an ever-expanding fan base, the MX Nationals championship is the most prized in this country and recognised globally as a truly competitive series. Most Anticipated Motocross Model – 2016 KTM 450 SX-F:
The buzz surrounding this title-winning machine has been immense ever since we saw this year’s Factory Editions. Dungey had great success in the US on it, all reviews have been raving about its improvements and for those who aren’t KTM fans, there’s also the very similar option of its Husqvarna siblings. Whether it’s the 450 or otherwise, the Austrians have their 2016s dialled.

Most Anticipated Enduro Model – 2016 Yamaha WR450F:
Just launched to the national press this month, the 2016 Yamaha WR450F will be a huge seller next year. Based on the YZ450F motocross model, Yamaha has massaged this beast for the bush and we’re comfortable in confirming it easily meets its design brief.

Top Team – CDR Yamaha:
This year turned out to be a fantastic one for the factory Yamaha Motor Australia 450 team. Entering the MX Nationals with Kade Mosig and comeback king Dan Reardon while Jacob Wright was ruled out through injury, Mosig was runner-up in the series where both riders won rounds. Come supercross, Reardon dominated for the title as Mosig trailed him for another second overall.

Best Event – AUS-X Open:
We knew it’d be good, but AUS-X Open definitely exceeded our expectations. We’ve said it time and time again, that this event is one of the most important things to happen to motorcycling in Australia, and we’re pumped with the coverage/traffic we received because of it! Plus, the first appearance of Ricky Carmichael down under was a special one. Hottest Topic – Silly season uncertainties:
While there have been so many storylines to keep track of this year, the local silly season has been frantic. As a result, we have new line-ups at all factory teams aside from the KTM combination of Gibbs and Styke (even they have expanded with Caleb Ward in MX2).

Greatest Disappointment – Team closures:
We saw a few very professional teams close their doors in 2015, both abroad and here at home. Chad Reed’s TwoTwo Motorsports team shut down mid-year, while at the end of the domestic season we effectively wave goodbye to the Team Motul Suzuki and Penrite Honda Racing (they plan on a supercross-only team) outfits.

Most Surprising Moment – Ferris AND Waters return:
After such a strong year in the grands prix, we were almost certain that at least one of these Aussie internationals would be remaining on top level equipment in MXGP. But nope, first it was announced Dean Ferris is coming home with CDR Yamaha and then later – more surprisingly – Todd Waters was named for the new Wilson MX-run factory Suzuki team here in Australia. Just as surprising was the news Ben Townley’s headed back to Europe fulltime with Suzuki.

Social Standout – Matt Moss:
Sure, his season was largely derailed through injury, but the multiple time national champion does an impressive job of both providing his sponsors exposure and giving fans a unique (and very raw) behind the scenes insight. He has a massive following because of it.

Special Mention – Jay Wilson:
When Jay Wilson was dropped by Serco Yamaha at the end of last year, you wouldn’t have blamed him if he parked the bike and went searching for a ‘real’ job instead. But no, he overcame all kinds of odds to dominate in New Zealand with JCR Yamaha and carried that form over to Australia, winning the national MX2 title. Legendary stuff!