All kinds of questions with Factory Suzuki MX1 Racing signing. 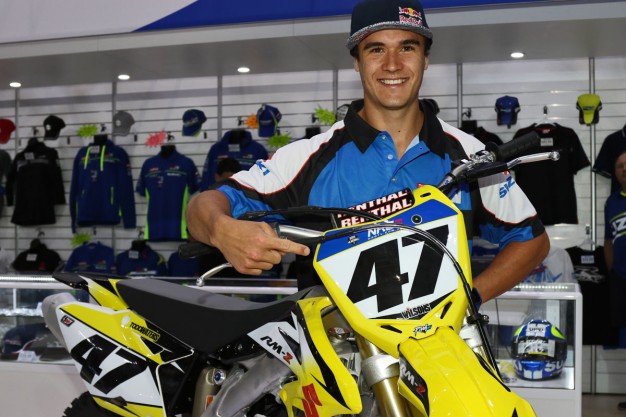 Riding to a podium result at the Maggiora, Italy round of the MXGP. It was a really muddy race and it came as a bit of a shock to get on the podium as I thought the European riders would be a lot better than me in the mud.

There’re two that stand out. The Thailand GP was tough because of the heat, but I think Lommel was more physically demanding. The sand is so deep and after two days of racing there your body was rooted after the sighting lap. It was just insane now rough it got, and it was hot that weekend too.

I enjoy riding Coolum, Murray Bridge, Toowoomba and Conondale. I quite like Aussie tracks as they’re fun and most of the time they’re prepped well. The GP tracks aren’t prepared or ripped at all and while they have good jumps, they’re just shit to ride. Matterly Basin would be my favourite MXGP track because it had a lot of mad jumps.

Doing something that involves adrenaline. Probably some sort of watersport such as surfing of wakeboarding.

Dean Ferris for sure. We’ve raced closely for years and have both come back to Australia at the same time too. We respect each other and both put in the same amount of effort, which means we’re very similar in speed. He definitely always pushes me.

Probably Tony Carioli. He’s one of the only riders I’ve met at the top level who’s just a normal guy. You walk away wanting to be like him, the way he holds himself and interacts with riders and fans. He’s a good down-to-earth person and there’s no bullshit there, even though he’s won more championships than anyone.

I put my right knee brace on my first. I’m not sure if that’s a superstition thing or if it’s just a habit though.

Win both the MX Nationals and Australian Supercross championships, then go to the Motocross of Nations, get on the podium and get myself back over there. I feel like I kind of got myself into a hole this year but now I know what I need to do to get back there and I’ve got some pretty clear goals.

I used to love the On The Pipe series, they’re so sick. I also watched Twitch’s Hood Rich again the other day too and it gave me goosebumps. It’s that good.

Surfing, wakeboarding, mountain-biking, cycling, and a bit of fishing in my downtime. I’ve been doing a bit of stand-up jet-skiing and when the surf’s big you can just send the thing. It’s so fun.

Not all the time. If I’m winning I’ll look at it every lap to find out what sort of gap I’m holding but if I’m in a battle I’ll sometimes forget, but in those times I know what I need to do anyway – get past the guy in front of me!

A Volkswagen Transporter van and we’ve just bought a 1972 V-Dub convertible Beetle that we’re going to do up and use as a beach cruiser.

Chet Faker to chill out and a bit of Triple J’s Hottest 100.

The people and the family atmosphere. It’s just a good time.

Who will win the 2016 AMA Supercross?

I reckon Ken Roczen will do it. He’s due.

I’m a cabinet-maker by trade.

It was with the next door neighbour when I was 12 or something. I tried to work out the tongue thing, just jamming it in there [laughs].

When I was 18 in my first season in the MX1 class I was leading the championship and had a bad ankle injury and tore all the ligaments. I was in a moon-boot for 13 weeks.

I must’ve been about 10 at primary school. We were playing footy and a whole bunch of Aboriginal kids ganged up on me.

I spent four days in Perth at the beginning of December, catching up with Jeff Leisk and the guys. It was good times.

That big one with Shaun Simpson at the Uddevalla GP in Sweden when he changed his line in front of me over a big jump and I went down hard. I went off at him afterward. He was sorry but still said it was my fault.