Ten months ago CDR Yamaha’s Dan Reardon wasn’t even in blip on the racing radar. Yet here we are at the end of the 2015 race season and the Queenslander is the toast of the pit paddock after achieving the unthinkable and grabbing the Australian Supercross Championship SX1 title. It certainly wasn’t handed to him on a platter either as he fought off frantic challenges from defending champ Matt Moss then toughed through the pain of a dislocated shoulder at Saturday night’s Melbourne finale to take home the goods. MotoOnline.com.au caught up with Reardon last night to get the low-down on the weekend and his end-of-season injury. 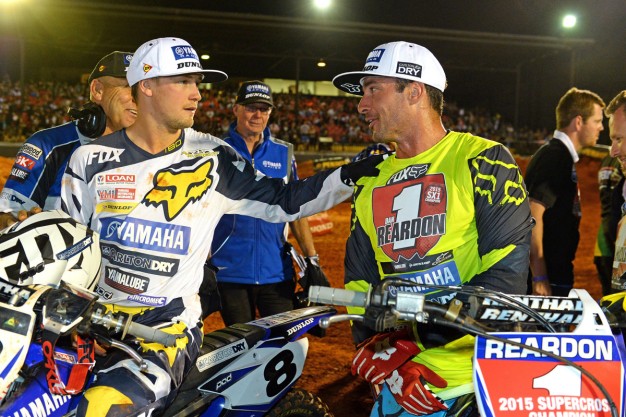 Well, Dan, the comeback is complete and in the best possible way. You must be feeling on top of the world right now.

It’s weird, actually. It still feels a little surreal. I’ve won three supercross championships before, with the last one being in 2007, but that seems like a lifetime ago now. Early in the year I had conversations with a few people where the championship was part of the plan, like Craig Dack asked me before he signed me if I could win a championship and I said ‘yeah, of course’. But at the same time I didn’t really think that would be the case, if I was to be honest. After the MX Nationals I wanted to put my head down and have a good pre-season for the supercross and I was solid all season, especially for this championship. Right now I couldn’t be happier.

Coming into Melbourne the title was practically a done deal for you, but then you crashed in the heat and dislocated your shoulder. What happened?

Things were going really well early on and I was feeling good in my heat and sitting in second. I hit a wall jump that I was jumping onto the flat and I guess I kinda lost focus on what the rear wheel was doing. I locked it up and stalled the bike as left the wall and it sent me over the bars. I landed straight on my stomach with my hands out then my bike hit me from behind. It kinda felt weird like I’d crushed my sternum or something and I knew straight away that my shoulder was dislocated. I was so thankful RACESAFE was right there and I just yelled at them to put my shoulder back in, whatever it took. I thought I needed to finish my heat to make the final, which wasn’t the case. Those last few laps to the flag were extremely tough. My bike was all twisted up and anyone who’s dislocated a shoulder knows how weird and uncomfortable it is. It definitely wasn’t fun.

What was the first thing that went through your mind when you dislocated your shoulder?

It wasn’t so much ‘there goes my championship’ but more desperation that I just wanted my shoulder put in so I could still race in the main. At the time it wasn’t panic mode, but I was definitely concerned [laughs]. With a shoulder, the longer it’s out the more damage it does. I’m so relieved it went back in quickly.

How tough was that main, trying to complete the race with a wrecked shoulder?

It was really tough. Straight after the crash I went to RACESAFE and I was there for about an hour and a half. They strapped me up and gave me two Nurofen and two Panadol, but that was all I was allowed to take. I told them I don’t care about the pain, just to strap it up so that it doesn’t pop out again. To win the title I still had to complete at least 75 percent of the main. If I didn’t, and if Kade finished first or second, he would’ve won the championship, so there was definitely a lot at stake. I ended up completing the whole race and finished seventh. Bopping and McCoy lapped me, but I knew where everyone was and what I had to do to take the title. I was just relieved to cross the line.

You certainly went through a lot to claim this championship. There was some big battles with Mossy early on before he was injured at Sydney, but it seemed that more often that not, you had the upper-hand on him.

I had a lot of fun racing against him, for sure, but at the end of the day I think I took his game plan and used it against him. I was surprised that he didn’t race Melbourne, but a corked thigh can hurt. It was interesting seeing a pic of him testing a new bike on social media already though. Looking back on the year as a whole, what stands out as the highlight for you?

There are so many and on so many different levels. Of course this championship stands out, but I think the biggest thing was back in March when I was talking down the street in the Gold Coast, going from shop to shop asking for a race-plan and no-one would give it to me. To win a title eight months later, that’s the biggest thing. I don’t blame anyone for not believing in me, but the motivation I had this year was incredible.

As far as we’ve heard, you’ve yet to sign a deal for next year. Can you give us the inside word on that?

Nothing is confirmed yet, but there aren’t many riders left to firm up deals. More than likely I’ll remain in Australia and there should be an announcement in the next week or so. The US has shown some close interest over the past few weeks as well; it’s been so good to see the sport in Australia stepping up and getting worldwide attention from top athletes and teams.

For sure. What are your plans for the off-season?

Well the plan was to surf, shoot and mountain bike, but I’m going to get an MRI on my shoulder tomorrow and I’ll know then what damage has been done. It feels pretty good compared to other shoulder injuries I’ve had so I’m remaining optimistic that it won’t be too serious. We’ll take a couple of weeks off and see how things are, but I’m looking forward to hanging out with my family over Christmas, especially as some are coming out from the US for it.

Sounds great mate. Some forced down-time can only be a good thing after a big year. Have a great Christmas.

Thanks mate, you too.