Following his day two victory at the AUS-X Open on Sunday, American talent Cooper Webb (Yamalube/Star Yamaha) was crowned the inaugural event champion after a thrilling 20-lap main event inside Allphones Arena at the Sydney Olympic Park precinct. MotoOnline.com.au spoke to the 20-year-old from North Carolina post-race about beating Chad Reed at home and his packed international racing schedule to round out 2015. Yeah, it was. It feels amazing. To end 2015 on a high note like that is awesome! For me, it’s a huge accomplishment. I grew up watching and wanting to be Chad Reed when I was a little kid, so to be able to race with him is a huge accomplishment. To be able to race him and have it come down to the wire like that was an awesome race. I’m just stoked. Whenever you can win, but especially like that in a fun, crazy main event [is good]. I’m sure all the fans loved it.

There was so much action there, with bikes going everywhere between yourself, Reed, Reardon, even Lawson Bopping, another one of the Australian guys. Take us through the race from your perspective.

Yeah [laughs], it was a wild one to say the least. I had a good start, I think I was second there for a bit behind Dan, actually third behind Dan and Bopping, then I took the split to get around Bopping, then he passed me back in split, then I passed him again. And then Chad passed me in the ‘joker lane’ and Dan ended up crashing when we were all 1-2-3 right there. Bopping actually got back into the lead and I passed Chad, then passed Bopping and just tried to run away. Those last two turns were just crazy with me and Chad. It was definitely one of those things where you had to be there to see it in person.

What did you think of the fly-by lane? Compared to the Monster Cup, where the Joker Lane is a slower section, this one was kind of a shortcut and faster.

I thought it was a good idea, because with the tight track sometimes it’s hard to pass. You could make your pass, but you had to play it right, because if you passed them and they hadn’t taken it yet, they can pass you back. So Chad played it smart and he actually passed me in it, but yeah I thought it was cool being faster instead of slower. 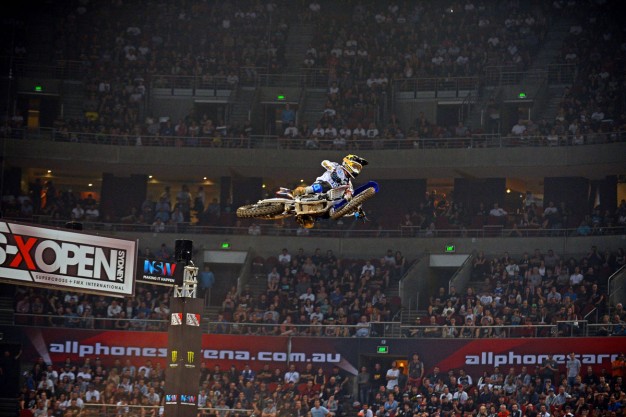 With Chad Reed on your tail in front of the Australian fans, live on national television here, that final lap – especially the last couple of corners and the triple – was really an intense race to the line. You almost crossed the finish side-by-side…

Yeah, those last two turns, like I said were definitely different. The lappers were there, I knew Reed was going to be really fast in the whoops, so I kind of protected that line and then that last corner I knew he was going to try and run it in or I wasn’t sure what he was going to do. I had the inside, which was good for me, and I was expecting him to cut down, so it was all good. I thought we tied as well – luckily it was over the finish, not the single before.

You’ve had a really busy schedule since you came back during the nationals and you have been racing all over the world. So what’s next for Cooper Webb?

Yeah, it’s been really, really busy, but awesome. It’s been an unreal year for me. I was able to get my first ever championship on the west coast. Unfortunately I got hurt at Vegas, but we came back in the outdoors and won some races, got on the podium. After that I got nominated for Motocross of Nations, but even before that I did the US GP. So a podium at the GP, des nations unfortunately we got second, but it was an awesome race there. Went to Japan to race the Japanese national and got second there behind Trey Canard, racing [Romain] Febvre again. Then it was back to supercross and raced Genoa in Italy and was able to win there, the next week was in Lille and got third overall there, felt really good. And then yeah, I got the last minute call to come here to Australia and it’s a place I have always wanted to come to, so I couldn’t turn it down. Last night I rode well, but it wasn’t the result I was looking for, so to end 2015 with a win against the legend Chad Reed is a hell of a season so far.

Well, yeah no worries, we all loved it and the crowd loved it. It was a great finish to your year like you said, so thank you for coming out.

Thank you and hopefully I’ll be back!