We’re just two days out from what has been billed as one of the biggest motorsport events to ever grace Australia and anticipation levels for the AUS-X Open this weekend are at an all-time high. Sydney’s Allphones Arena is about to be transformed into a crazy supercross track that will see Australia’s finest racers go up against Chad Reed and Cooper Webb, with Ricky Carmichael also scheduled to make an on-track appearance. With so much information and rumours flying around, we thought we’d pick out some of the biggest questions and answer them for you. 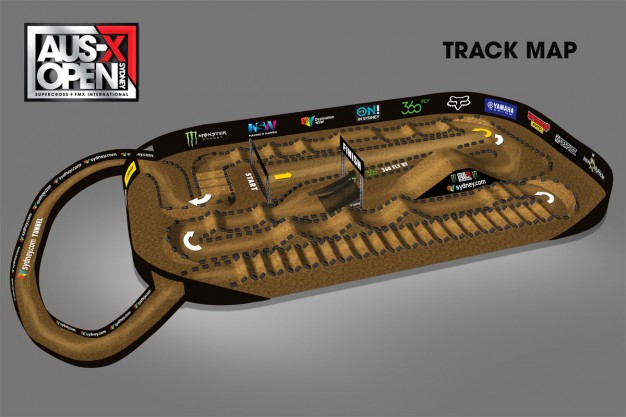 Q: So what’s the deal – is James Stewart racing or not?

A: Not at this stage, no. Be rest assured that the promoters are doing their utmost to have him there – even at least to sign for the fans – but last we heard this week their attempts to contact the JS7 camp had gone unanswered after his crash and suspected injured ankle at the Paris-Lille Supercross two weeks ago. However, in Stewart’s place organisers have announced defending AMA Western Regional 250 Supercross Champion Cooper Webb will be behind the gate, and the one and only GOAT, Ricky Carmichael himself, will make an appearance and take on Chad Reed in a head-to-head feature race! Despite the setbacks, the promoters are certainly doing everything in their power to make this weekend one hell of a memorable event.

Q: What can we expect from the track layout?

A: Plenty. AME Management released a 3D illustration of the track layout and it’s going to be wild. The long whoop section is going to separate the men from the boys, the finishline jump will feature a steel kicker and part of the track will disappear into a Sydney.com Tunnel underneath the stands for a big wide-open sweeper. The biggest talking point is the revolutionary fly-by lane that shortcuts past the finish line jump. In much the same way as the Joker Lane at Monster Energy Cup, every racer must use the fly-by once during the race. What’s groundbreaking, though, is that the fly-by is faster than the usual race line, meaning tactics for its use will be a huge talking point throughout the weekend.

Q: Is FMX Best Trick on both nights?

A: Yes, and it’s shaping up to be incredible. With renowned Aussie FMXers Blake ‘Bilko’ Williams, Cam Sinclair and Steve Mini holding down spots in the judges’ panel, some of the biggest names in freestyle motocross – Tom Pages, Taka Higashino, Jacko Strong, Rob Adelberg and Ryan Brown – will duke it out for a whopping $120,000 prize purse (so $60k each night). The never-before-seen tricks these guys have been working on are going to blow minds. Q: Do both events count towards the Australian Supercross Championship?

A: No, only the first of the two events of racing will see riders accumulate points for their championship hopes. However this is the only thing that separates the action from Sunday. In fact, Sunday will also boast an even bigger prize purse for the riders to vie for and will have just as much fireworks.

Q: Will there be livestreaming?

A: Not as such. For Saturday there will be live results available via Computime. However, we have had a bit of a look ahead on the TV guide and noticed 7Mate has a AUS-X Open time slot locked in for Sunday afternoon from 3:30pm to 6:00pm AEDT, which coincides with the same time that Sunday’s event will be running. No doubt the organisers and/or Seven will make some sort of announcement about this in the next day or so.

Q: Are there still tickets available?

A: You betcha! While Saturday’s racing has sold out, there are still limited Gold, Platinum and VIP tickets for Sunday’s racing available. Head to www.ticketek.com.au to guarantee a spot to witness the action first-hand. Also note that Sunday’s racing will start at 2.30pm, giving families plenty of time to check out the action then get home and ready for school the next day.