In what will long be remembered as one of the stand-out performances of the series, Victorian privateer Lewis Woods from the Davey Motorsports KTM team captured a stunning win in the SX2 final at last Saturday night’s fourth round of the 2015 Australian Supercross Championship presented by Penrite Oil, staged at Jimboomba X Stadium in Queensland. In a championship that had been dominated through all three opening rounds by visiting American ace Jimmy Decotis, Woods has etched his name in the record books as the first rider to knock Decotis off the top step of the podium this year. He spoke about his wire-to-wire win post-race. With a three week break after Adelaide, did you feel like the J2 supercross back at Jimboomba for round four of the championship could be a turning point?

I was feeling good because the bike had been so good at Adelaide. During the break Paul had done some more work to it and it was only getting better again. He freshened it up with a new piston and rings and got some parts to keep it in top shape. I’d done a lot of practice on the bike during the break, as it is the only bike I have, because I don’t have the budget to get a practice bike. I do have a 450 at home, but that’s just not the same to practice on when you are racing a 250.

So how did things kick off when you got back on the bike at J2?

I was happy with my heat race. I got a good start out of the gate but went a little wide in the first turn because we hadn’t hit it before and had not had the chance to learn it, so I missed the apex and ran wide, which meant I missed timing the first rhythm section. But I came through and made some good passes and felt pretty good on the track and knew I could race well on it. I could turn in under some guys and the traction was there for me. Jimmy Decotis was just up ahead of me in the Heat and I felt like a had his pace and could run with him, so I felt good for the final. I had a good gate pick, so it was all pretty much set for the Final.

But before the final, you got a last-minute call-up to be part of the Best Whip contest after the rider line-up changed.

That’s right. The race promoter Scott Bannan came into the pits and asked me to get my gear on and go into the whip contest. Some other riders had opted out, but my feeling was, you’ve gotta have a whip contest for the fans! And it was sweet; the prize money I got for winning it will be real handy!

Then you backed right up for the SX2 final after those mighty whips and as it turned out, you and Dylan Wills nailed the start on your KTMs.

For the actual start, as I came out of the gate, I almost missed a gear and it kind of buggered me up a bit and I went a little left and got tangled a bit with Clouty.

Once you were in the lead it looked like you rode a super-clean race out front all the way.

Once I was in front I just started ticking off laps, because making fast, consistent laps was always going to be the most important thing on that track. I take my hat off to anyone who could do that, because the J2 track was tough. After all the heat through the day, the ground was so hard and traction was absolutely vital, and I just knew I had to settle and ride clean and fast and minimise mistakes. That was so important. I had to rule out mistakes, like going into the rhythm sections in the wrong gear, or bad line choice, stuff like that, as that can cost so much time.

How good did it feel to take that chequered flag and fire the candles?

Unreal! Really unreal, actually! As a privateer, it was awesome. For guys like me, racing as a privateer, there is so much that goes into it, not just riding the bike like the factory guys. That’s the biggest thing that makes it special to me.

Where does this win rank in your career?

Right at the top. I won some junior nationals back in the day and have won races over the years, but not like this. This is 100 per cent the best win ever. 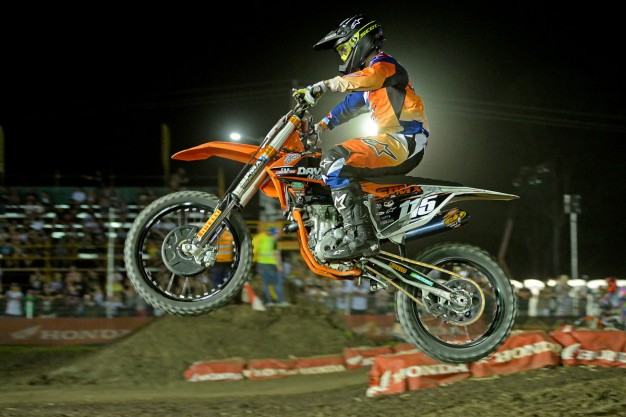 Decotis had some really great sentiments for you on the podium, did that feel good?

Jimmy was awesome, but that’s just the kind of guy he is. He has been a privateer back home in America for a long time and he’s been top privateer for years, so I think he might see the parallels. He’s a cool dude, for sure!

The win has seen you leap up the championship points table now. Decotis leads with 137, from Luke Arbon and Jackson Richardson tied on 111, then you and Geran Stapleton are tied on 104, followed by Dylan Wills on 98 and Luke Clout on 92. It’s a fair old traffic jam in the SX2 class.

Yeah, it’s really close now with two rounds to go. I’m pumped about it. It’s a shame I had to two ninth places earlier on, because at the end of the day you need to be really consistent right the way through any Championship.

So what’s your plan for these last two rounds?

More of the same would be good! This week my bike is staying up in Sydney, so I won’t get to ride it again until we get to Allphones Arena. So I will have to ride my 450 at home for training. But I really know what the KTM 250 SX-F is like now and I feel really good on it and I know how good it was last weekend, so I probably wouldn’t even want change anything anyway. We probably won’t even change the tyres!

That will help have top help the privateer budget, for sure! Good luck for the final two rounds and good luck the big whips and the race wins keeping coming.

Thanks so much. The vibe since getting the win at J2 has been awesome and more of it would be great. I’m loving the love, that’s for sure, so thanks to everyone who has played a part.