Victorian’s Daniel ‘Chucky’ Sanders claimed the top step at last weekend’s Wildwood Rock Extreme Enduro, beating some of the best riders in the world and country. MotoOnline.com.au caught up with the 21-year-old KTM Enduro Racing Team ace straight after his victory last Sunday to find out what he thought about it all. 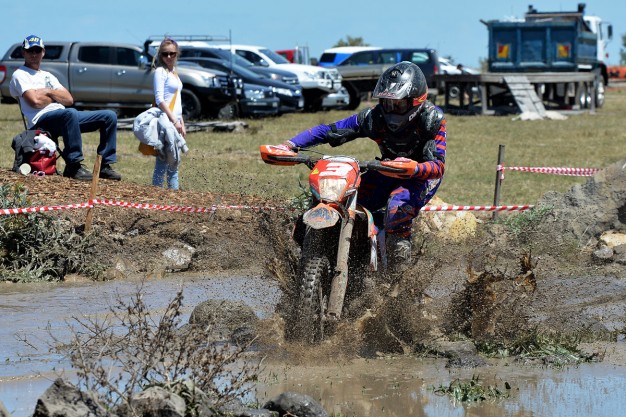 Chucky, congratulations on the win today. Not only did you claim the main prize, but you also managed to take the win this morning’s Prologue as well. Can you sum up your day from what it was like behind the bars?

Yeah, it sure has been a challenging day, that’s for sure. I knew I was going to have my work cut out for me from the word get go as there were a lot of good riders here today, such as the Hemingway brothers, Matt [Phillips], Mitch [Harper], Broc [Grabham], Lachlan [Stanford] and the local boys who are in the Wildwood Rock Club and ride here from time to time. So my work was cut out here today. To win the Prologue this morning sure did help to get the holeshot, as it’s always a big plus to start on the front row. I normally stuff up on the Prologue, so it was nice to get a clean lap out there. In regards to the track itself, I take my hat off to Steve Braszell and his crew who have set out an unbelievable track. It was a lot more challenging than last year – that new rock section he put in sure did sort the men out from the boys. On the first few laps myself and the other riders did struggle to get up it; you just have to soldier on through and keep pushing on, which I did. All in all it was a great day and really looking forward to coming back next year and having another go at it and carrying that number one plate.

That leads me into my next question, for you personally, just how hard was that rock section? It just looked ridiculously hard.

It was crazy! When I saw the photos of it on Facebook, I was thinking to myself, ‘what has Steve done here? He’s going to try and kill us!’. Steve added a few man-made wood sections so we could get up and across the rocks and over the big gaps. You almost fell off going into the holes, so it was pretty crazy there. This event is more of a skill race than speed like in a cross country format, the Wildwood Rock Extreme Enduro is definitely one to finish. To have my name up on the board alongside Graham Jarvis, Phillips and Harper is a pretty cool feeling. As I said it’s definitely a tough race to win, so it’s nice to walk away on top.

So tell us, just how much training have you done to get yourself ready for Wildwood? Obviously this is completely different to the AORC and even Enduro-X.

I simply went out free riding in the hills around my area and tried to find the hardest stuff I could. Unfortunately there is no terrain like this around where I live, so I just did what I could. The speed of this event is not fast-paced as I explained, so it’s all about trying to practice slow riding stuff. I did a bit of Enduro-X training on my track at home, which kind of helped a little bit. I didn’t really do much training for this weekend as I was planning on getting some surgery done on my thumb. Even before Jarvis had pulled out, dad and my brother were egging me on to do the event, then when I did hear that Jarvis had pulled out I thought ‘oh well, may as well do it’. I only just lost out on second place last year to Ben, so I knew I had a good chance of fighting for the victory. It was a bit of a rush at the last minute however. I got Goldentyre to send down the softest mousse and tyres and did some testing on them, then I went back to some Enduro-X suspension, as it helps in the rocks, so in terms of training for Wildwood, it was a bit of a rush to get things ready. Winning this event, does it mean more to you than some of your other victories you have won in the past, purely because it is a lot tougher – mentally and physically?

Yeah, it is definitely one of the highlights. Not only because how tough it is, but I managed to beat some of the best riders. To go out and prove I could beat them by a bit is an awesome feeling! I still have to wait for it to kick in. I have to say a massive thanks to Steve for putting on this great event. It would be great to get a few more of the AORC riders to come race Wildwood, but unfortunately their not so keen on it, as they are into high speed grass track stuff these days. This event brings you back to the high-skilled enduro stuff. It’s not a motocross track in the bush; this event really sorts the men out from the boys and shows if you have skill or not.

Let’s quickly talk about next year’s AORC. You’re back on board with KTM Enduro Racing Team. Can you give us your prediction on what will happen in 2016?

Well so far I haven’t decided on what bike I’ll be racing as yet. I’ll be pushing as hard as I can to get that number one plate for the Australian Off-Road Championship. I finished third in points, but fourth on a countback and second in E3. It would be nice to have Toby [Price] still around for next year to try and beat him. I’ll have a few weeks off now, as I have to get surgery on my thumb, so come January it will be all systems go and get back into training. I’ll knuckle down and really have a dip next year that’s for sure.

One final question. You’re $6500 richer. What are you going to spend the money on?

I have thumb surgery coming up, as I said, so a bit will go to that and will buy some training equipment. Might buy some fairy bread as well…