The high-flying 2015 Australian Supercross Championship presented by Penrite Oil is a spectacular sport where man and machine are pushed to the limits, so it’s reassuring to know competitors take part under the watchful eye of RACESAFE, Australia’s leading specialised motorsport medical service.

Over the past 20 years RACESAFE has served as the Official Medical and Safety Team to many of Australia’s major motorsport events, including the Australian Superbike, MX Nationals and Supercross Championships, in addition to local MotoGP, World Superbike and V8 Supercars races.

RACESAFE provides a full range of motorsport emergency services, which includes a highly specialised and experienced team of trauma doctors, paramedics, nurses, physiotherapists and rescue personnel who donate their time and expertise to ensure the safety of motorsport competitors. “Time and time again the RACESAFE team have been on-hand to assist competitors when they need it most – in the time of an on-track medical crisis. Knowing the RACESAFE team is an integral part of the 2015 Australian Supercross Championship brings an added level of peace of mind to the racers, and, of course, their families and friends.”

“Supercross is one of the most exciting forms of motorcycle racing of all, but it comes with both thrills and spills,” Maas explains. “RACESAFE has a highly skilled team that is experienced at responding to crashes and treating the serious injuries that come from the high speeds and big jumps of supercross. 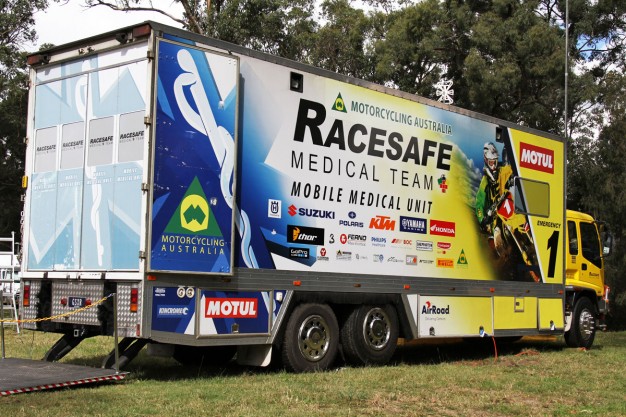 The RACESAFE team operate out of a purpose-built, fully-equipped Mobile Medical Unit that travels from event to event. This world-class facility provides an on-site Emergency Medical Centre, physiotherapy facility and Mobile Command Unit for the RACESAFE Medical Team.

More details of the world-class and extensive facilities the RACESAFE team offers are available by viewing the www.racesafe.com.au web site.