CDR Yamaha rider on his fourth A4DE title in Tasmania.

CDR Yamaha stand-in rider Daniel Milner continued his Australian Four Day Enduro domination with a convincing Outright win at the 2015 instalment at Wynyard, Tasmania. The 24-year-old Victorian has been getting his feet wet Stateside in the GNCC Series this year, but the opportunity to go head-to-head with former Enduro World Champion Matt Phillips in Phillips’ backyard was too big to miss. MotoOnline.com.au caught up with the Victorian racer to get his take on this year’s A4DE and his US experience to date. Dan, well done on another A4DE win. How many is that you’ve won now?

Thanks, mate, this was the fourth in a row I’ve won. That’s a good record and I’m pretty stoked to keep the streak going, especially with it being held in Matty Phillips’ backyard.

How did it all go for you? Looking at the time sheets you won every day except the day four moto.

It went really well. The tests were a lot faster and drier than we were expecting that definitely made things a bit scarier. I won the first day by three seconds over Phillips, but I rode quite tight and I made things harder for myself by falling off three days in different tests. We got a bit of rain on Wednesday night and that made the trails really slippery for pretty much all of the second day. Some of the sections were like ice, but I still managed to get some good times and open up my lead to over 20 seconds. Day three normally makes or breaks your event, but in this case I had my head screwed on right for a change and got a good result – I won five of the six tests and Toby Price won the other one, so it was a good day. In the final moto on day four I got in behind Beau Ralston off the start and stayed there in second place all race. That motocross background he has made it hard to reel him in so I was pretty happy to just stay in second and bring the Outright win home.

Now that you’ve won four straight A4DEs are you concentrating on keeping the streak alive or just trying to win each one as it comes?

A bit of both really. After the year I’ve had this win is quite special to me. 2015 has been the hardest year of my career being in the US and struggling so much over there. Before the race a lot of people were saying that Matty Phillips was the favourite, seeing as it was his home event, but if anything that just battered me up and more hungry to beat him.

It must’ve been nice to catch up with everyone and see some familiar faces around the pits again too.

Oh yeah, it was so good being back here in the motherland, seeing all my mates and not having to be worried about being eaten by a bear or shot by a redneck! She’s pretty wild where I’ve been hanging out.

Well you would’ve felt a little at home in Tassie then! After a year away, what’s the biggest difference between off-road racing in the US compared to Australia?

Our tracks [in Australia] are a lot smoother. I was happy to get back on some smooth, fresh trails that aren’t beaten up by quads. The competition over there is stiff as well. Kailub Russell was strong all year until his knee injury, then there’s Josh Strang and Ryan Sipes who are both killing it. Coming back home made me realise that the talent doesn’t run quite as deep in the field here and that made it a bit easier. 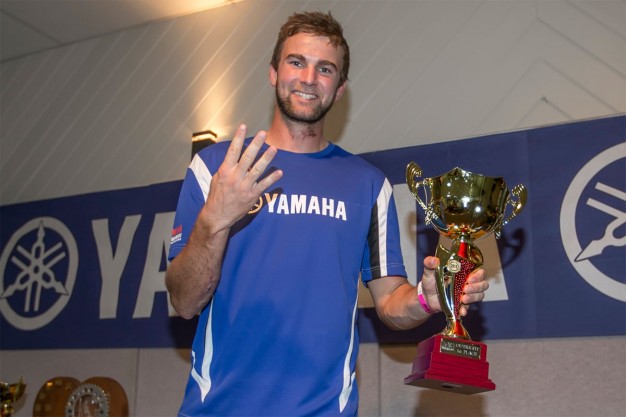 So you think your pace has stepped up over the past 12 months?

Without a doubt. I’ve only won one round of the sprint championship so far and I really had to push for that. Now I just have to work on the pace for the GNCC races, ride smarter and not burn myself out during the race.

The GNCC scene must’ve been a really steep learning curve for you this year. Did you enjoy your season of racing there?

Yeah it’s a lot different and I knew that’d be the case and I’ve have a big learning curve. I started off hating it and not wanting to be there, but gradually as the year went on I found some rounds that I enjoyed. I now know what I’m up against for next year and I’ve changed a few things up; I’m going to train with Josh Strang, which will be a big help and hopefully I can start kicking some Yank arse.

[Laughs] nice. You’ve got a bit of an off-season now. What are your plans?

I’m looking forward to relaxing a bit, hanging out with my family and friends and going riding with my buddies. I’ve got some fitness training to do as well – the US fast food got to me this year and I’m a bit of a fat bastard now! I’ll get some training happening, do some surfing and make the most of the summer before I head back to the States in February.

Awesome, sounds like a good plan, Dan. Cheers for the chat.

Anytime, mate. Have a good one.