At an explosive second round of the Australian Supercross Championship, CDR Yamaha’s Dan Reardon not only tore the challenging Jimboomba track to shreds, but he also walked away holding the red plate after short, fiery battle with defending champ Matt Moss. Fresh off his win, MotoOnline.com.au caught up with the comeback king to get his take on the event, battling with Mossy and how it feels to have the red plate on the front of his bike. 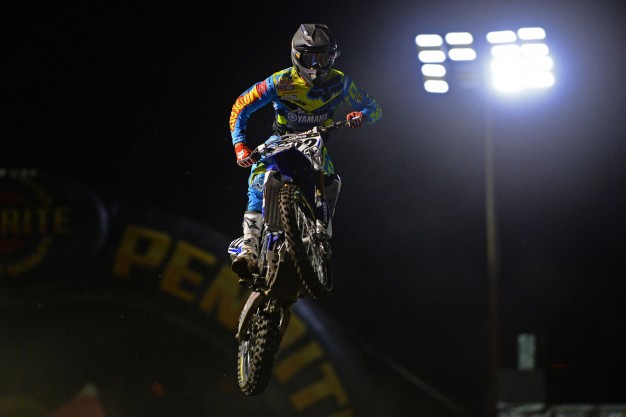 Dan, welcome back to the top of the Australian supercross box! It’s been a while since we’ve seen you up here.

Yeah, it’s been a while hasn’t it? I think the last time I won a supercross was at the Perth round of the Super X back in… 2009 I think? It’s only days like today after the event where you sit back and think about how long it’s been. On the night your focus is all about being in the moment but yeah, it’s been a long time since I was up front. My emotions didn’t get the best of me all night either, so that’s a good thing seeing as it’s been that long.

What did you think of the Jimboomba round as a whole?

It was very different to the first round at Bathurst where we had rain and the track was very technical and rutted. Jimboomba was the complete opposite and was very hard-pack, but broke away and crumbled a bit as the night went on. I rode the press day and knew it’d be a hard-pack, but when it’s like that you have to be very patient and use a lot of finesse in order to go faster. We had a good game plan coming into the weekend and it worked out well and it was a good feeling to leave with the series lead.

There was a solid crowd at Jimboomba too, which must’ve been nice, seeing as it was a home round for you.

Honestly, I think that’s what stood out to me the most – the amount of people who are just as excited to see me back racing as I am. I have a lot more fans than I thought and that made the weekend even more special. There were a lot of faces there that I hadn’t seen in a long time and it brought home just how much of a family atmosphere exists in racing.

There’s a pretty fierce battle simmering between you and Matt Moss now. First of all you had to line up beside him in the Dash for Cash. Were there any nerves there?

I didn’t think too much of it. Our plan was to do well in the main event and use the Dash for Cash to try different sections that I hadn’t used since practice and give myself some options. It was always going to me and Mossy at the end of that race. We both went off-track a couple of times and put on a show, but in the big scheme of things it’s a small part of the night and it would’ve done neither of us any favours to end up on the ground. At the end of the day though, I don’t mind a bit of rubbing, that’s for sure. Well the first few laps of the main were pretty intense between you and Mossy too. Take us through it from your point of view.

I got a reasonable start even though I clipped the back of Kirk Gibbs in the first turn. I quickly got into second behind Moss and was thinking of the game plan and how I wanted the race to pan out, but after the first lap I thought ‘let’s go racing now’. I started to be a bit more aggressive, but still rode extremely clean; no part of me wanted to put Matt on the ground. If I wanted to clean him out it’s too easy to do it in supercross, but that’s not what I’m about. I want to go racing and I love a good battle. It was a shame he went down as I was looking forward to racing like that for 20 laps.

After Mossy crashed the pressure was off you a bit, but you still kept clicking off really quick lap times.

I actually didn’t know he’d crashed for another two laps, but as soon as I got that signal I put the hammer down. The whoops got the better of me a couple of times and I had a couple of Excitebike moments, but apart from that it was a solid main. It was one of those tracks where it was really hard to make up time, but it was very easy to make a mistake and lose ground.

Well, with both motocross and supercross round wins in your pocket now this year, you’ve proved you’re definitely back on top. How much of a confidence booster has the past couple of weeks been?

It’s definitely helped the ball continue to roll. We put our best foot forward at Bathurst and knew straight away what we needed to work on. They’re only little things, but they all make a big difference. We’ll continue to push that line and make sure we get stronger. Now that we’ve got the red plate everything is falling into place. The main goal now is to sustain that and keep it at the end of the championship.

Great stuff. Well all the best with the training and we look forward to seeing what you bring at Wayville in a couple of weeks.