Bathurst’s opening round of the 2015 Australian Supercross Championship opened the new season – and another new era of the sport locally – last weekend, showcasing some of the finest talent in this country with deep fields in SX1 and SX2.

It was a relatively successful weekend from a number of angles considering the rain that impacted the track conditions at stages, however similar to last year the show ran far too long and viewing was average at best aside from few vantage points. The spectators were thick during the early stages of the evening, but with the main events so late they did begin to filter out.

In fact, there’s been mounting speculation this week that a handful of team managers are calling for day two of Sydney’s AUS-X Open to be the final round (it’s currently scheduled as a standalone, non-championship event) rather than Sunshine’s final round on the calendar (also ran by Bathurst promoter Full Throttle Sports).

Upon contacting Motorcycling Australia this week it doesn’t appear that will happen, but it indicates the extent of the frustration team managers and otherwise had following Bathurst. It was hoped to be discussed this weekend at Jimboomba according to teams I spoke to, however MA wasn’t aware of it being on the agenda when contacted. Personally, I welcome the prospect of mixed promoters overseen by MA (and applaud all of them), though the one major thing the sport needs is consistency (especially when it comes to the platform of livestreaming, live timing, PR and social media. If anything, what this structure will do is show what promoters are most capable of putting on great, sustainable shows.

Supercross season is typically very important for teams and the industry, with this year’s series one of the most anticipated in recent memory. While Bathurst wasn’t perfect, Jimboomba is meant to be an epic stop under Scott Bannan’s promotion and as a result, the racing will be streamed on NRGTV (not just qualifying like last weekend).

Some quick silly season news to wrap this up; Team Honda Racing’s Australian Superbike team is running the official Honda motocross team as well in 2016. There’s been no announcement made – and we still expect a variety of other Honda supported teams – but speculation has linked both Jay Wilson and Dylan Long to the 450 program (what a team that would be!). Let’s hope it’s true.

And yesterday was a big news day internationally, firstly with confirmation of Eli Tomac heading to Monster Energy Kawasaki in 2016, then Yamaha Motor announcing Chad Reed will make his racing return in blue on the YZ450F at this weekend’s Monster Energy Cup. You could call it a homecoming of sorts.

It’s a frantic time of year for race teams as they gear up for the second round of the Australian Supercross Championship at Jimboomba this weekend. Only a week has passed between rounds and the quick turnaround straight off a six-week hiatus between the motocross and supercross series has come as a bit of a shock to the system.

A bit of news coming into this round is that Team Motul Suzuki will only have one rider under the tent, with Kale Makeham pulling out with an ankle injury he sustained at the brutal first round at Bathurst last Saturday.

Fortunately for Suzuki, the rider flying solo is two-time defending champ Matt Moss who seriously hit the ground running last weekend on his first race back from injury. Anyone who’d written him off after such a long injury layoff was forced to eat their words as Mossy began in the same fashion he left off – crushing the SX1 field. 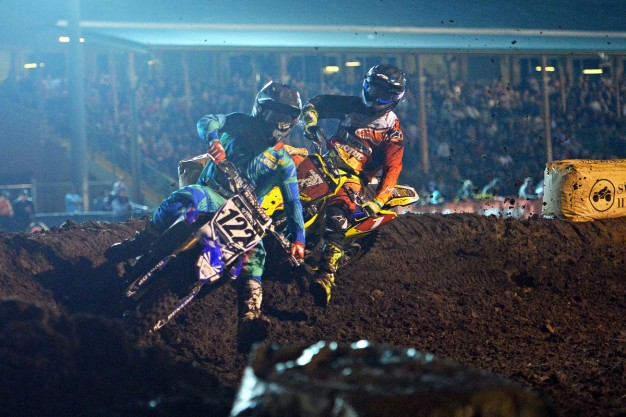 It was interesting to see the dynamics when Moss and CDR Yamaha’s Dan Reardon crossed paths during the heats. There’s no love lost between the pair with Mossy more than happy to tell the world how much he hates the returning Queenslander.

There’s a whole bunch of personal reasons behind the vendetta, but if Bathurst taught us anything, it’s that when these two find each other on the track there’s likely to be some white crease marks on the plastics.

Tonight’s round at Jimboomba will see a replica of the 2015 St Louis AMA Supercross track, which will be as much of a test for the riders as it is a treat for the spectators. The promoter of the Queensland rounds, Scott Bannan, is a passionate bloke who’s proved he’s got the best interests of the racers at heart. He loves nothing more than pulling together a fantastic event that pumps up both the crowds and the riders and ensures everyone leaves with a smile on their face.

Provided the weather plays the game (it’s supposed to be fine and warm), the Jimboomba round of could be one of the standouts of the 2015 series. Best of all, if you can’t make it along to the racing to support the event in person, NRGTV is livestreaming all of the heats and finals live and loud, straight into your lounge. What’s not to love about that?