Off the back of a successful 2014 where it really felt like Australian Supercross turned a corner, the 2015 championship has a tangible air of excitement around it as a handful of promoters step up to look after individual events. As well as the promise of a cracker series of rounds, the line ups in both the SX1 and SX2 classes are brimming with talent and MotoOnline.com.au takes a look at a selection of racers to watch when the gates drop at Bathurst this weekend. 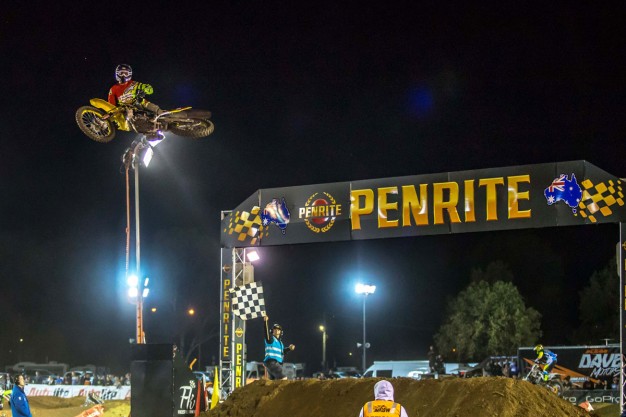 8. Kirk Gibbs:
Riding on a wave of momentum after a killer outdoor season, Gibbsy’s going to have to do it all over again from scratch come Saturday night. It’s no secret he’s more of a motocross specialist than a supercross rider, but that won’t stop him from regularly putting his KTM 450 SX-F on the podium. He’ll have a big mountain to climb to beat the likes of Matt Moss, Gavin Faith and Adam Monea, but in the short, sharp nature of indoors anything will – and often does – happen.

7. Jimmy Decotis:
A late ring-in for the Penrite Honda Racing team, Jimmy Decotis will enter Bathurst with an air of uncertainty around him. He’s never raced in Australia against our guys but he’s a strong rider in his own right – an eighth overall in the AMA Eastern Regional 250SX Championship this year proves that. How he’ll acclimatise to lining up alongside new faces, different formats and tighter tracks remains to be seen, but you’d be a foolish person to rule him out as a SX2 championship contender. We’ll know a lot more about where he sits in the grand scheme of things after Saturday night’s Bathurst opener.

6. Jackson Richardson:
One rider many people have overlooked so far in the pre-season shakeouts and bench-racing is North Queenslander Jackson Richardson, who’s returning for another stab at the SX2 title this year, this time as part of an expanded Penrite Honda Wilson MX outfit. With the exception of Jimmy Decotis and Taylor Potter (selected rounds only), no rider in the field has the amount of recent supercross experience that ‘Jatz’ has after a pretty decent season racing the AMA West Coast 250 Supercross Championship. Richardson is a supercross specialist through and through and will be a heavy favourite to win races and be part of the SX2 podium furniture this year. Not to heap pressure on his shoulders, but we expect a top three finish out of him.

5. Luke Clout:
Serco Yamaha’s Luke Clout has big dreams of going to the US next year and one of the best ways he can put himself forward to American teams as a viable candidate is to crush the SX2 field in this year’s championship. An indoor title will go a long way to sealing a deal over there and for that reason alone – not even taking into account that he’s still smarting from losing the MX2 championship – Clouty is going to be very, very dangerous. It’s not going to come easy for him, but few people have the motivation that Clouty currently possesses. He’s just going to have to ensure he finds the consistency he’s been missing at times this year. 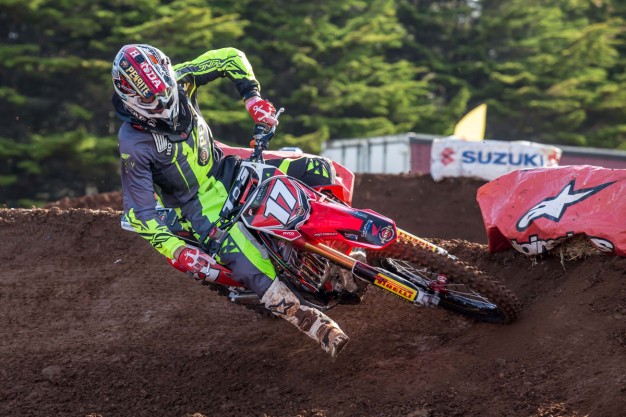 4. Kade Mosig:
Victoria’s Kade Mosig always seems to find an extra gear and carry a spring in his step when supercross season rolls around. Entering his third SX season on the YZ450F, Mosig will be more than familiar with the CDR Yamaha team structure and what’s expected. Off a fast finish to the MX Nationals where he finished second overall (as well as having an amazing practice set-up at home) we hold high expectations of Mosig and what he’ll achieve this season. Race wins certainly aren’t out of the question and with a 2016 contract at CDR yet to be announced, there’s possibly some extra incentive to put himself on the box.

3. Adam Monea:
Last year NPS Monster Energy Kawasaki’s Adam Monea proved to be one of the only riders who could match the pace of the white-hot Matt Moss and since then Monz certainly hasn’t lost any speed. A solid motocross season that saw him win races and sneak onto the championship podium will set him in good stead as he tries to hunt down his maiden pro championship. While a championship win isn’t out of the question, Monz will have to bring his A-game to every single heat and final if he wants to stand a chance against Faith and Moss.

2. Gavin Faith:
Even though he’s returning to Australia for the umpteenth time, 2015 will mark the first time Penrite Honda Racing’s US recruit Gavin Faith has fronted up to the SX1 class and for that reason alone, we’re very keen to see how he goes. He’s won two SX2 titles here including last year’s memorable win and if he can translate that pace across to the big boys’ class, we expect him to win races, especially on the more wide-open tracks that he’s more accustomed to.

1. Matt Moss:
If Mossy had come off a clean, healthy and successful MX Nationals campaign, we’d have upped his rating to 10 out of 10 in terms of championship chances. There’s no doubt in anyone’s mind that the two-time defending champion is the heavy favourite, especially after he clean-swept the 2014 series. There’s a slight air of uncertainty around him after a horrid year of injuries and bad luck, but if anyone knows how to find the finish line and win races, it’s Moss. On top of that, there’s the inspiration of sending Team Motul Suzuki out on a high after it was revealed they’re exiting the race scene next year.