MotoOnline.com.au dissects the incredible 2015 Motocross of Nations (MXoN) at Ernee and picks out 10 standout performances after a highly entertaining and eventful weekend of racing. 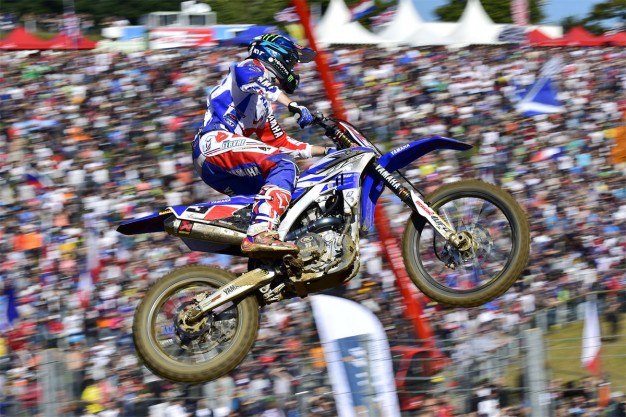 10. Luke Clout (Australia):
Roped into the Australian team at the 11th hour to replace an unfortunate Jay Wilson, Luke Clout didn’t have time to get over the jet-lag before lining up on the gate for his country. His weekend got off to a shocker when he was taken down in the first turn of his qualifying race, fracturing a rib and injuring his hand. Clouty soldiered through the pain and a wrong bike set-up to 24th in his first race, then came to the fore in the second moto to finish 13th. Remember, he was riding a 250F against the 450s in both motos. Sure, it wasn’t the results he would’ve liked, but considering the circumstances he can hold his head high.

9. Jeremy Van Horebeek (Belgium):
Yamaha’s Jeremy Van Horebeek proved to be the mainstay rider of the Belgian squad and was hugely instrumental in getting his team onto the podium. Racing in the Open class, The Beek qualified third on Saturday, then battled his way to 4-7 results in his two motos, placing him by far and away the best of his team. Ken De Dycker (24-9) and Julien Lieber (12-36) had a day they’d rather forget, but at the end of the day they stood on the podium, courtesy of Van Horebeek’s efforts.

8. Gautier Paulin (France):
As we’d predicted in the lead-up to this year’s Motocross of Nations, Honda’s Gautier Paulin was undoubtedly the chink in France’s armour. After he dominated the MXGP qualifying race by 11 seconds over Ben Townley, it seemed that he was bringing his same devastating form that he enjoyed at Kegums last year. Although he couldn’t translate that pace into Sunday’s races, his 7-5 finish was a gritty, determined effort. Paulin grabbed decent starts in both races and managed to hold his ground, ensuring his country successfully defended their title as the greatest motocross country in the world.

7. Jeremy Martin (USA):
The United States’ MX2 rider mightn’t have had any answers to his arch-rival Marvin Musquin’s questions, but Jeremy Martin had an impressive, consistent MXoN outing, with 5-5 results. Martin clawed his way from 10th in his first race to finish 25 seconds off his teammate Justin Barcia’s rear wheel, then backed up his result by holding down fifth from start to finish in his second race.

6. Evgeny Bobryshev (Russia):
It seems a little harsh to slot Evgeny Bobryshev in sixth place in this article as he had an outstanding outing at the 67th running of the MXoN. After qualifying sixth, ‘Russian Bob’ tore off the gate in his first race with a fourth place start, then passed Ben Townley and Max Nagl to finish an impressive second to USA tearaway moto winner Justin Barcia. In his second race he held down third until the final two laps when he succumbed to a fast-finishing Barcia. Still, Bob’s 2-4 result was one of the big success stories from the event, although he was let down by his two team-mates as his country finished 12th in the overall classification. 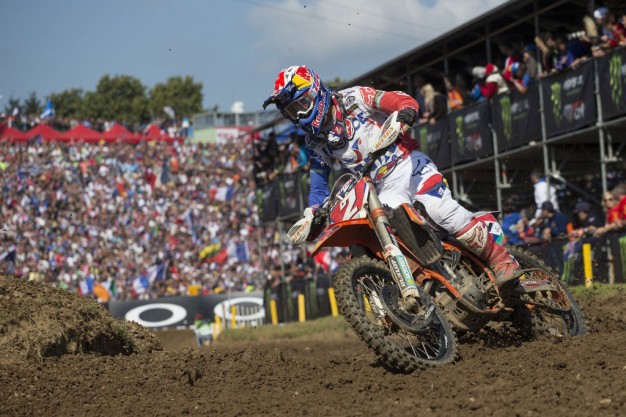 5. Cooper Webb (USA):
Considering 2015 was Cooper Webb’s first-ever Motocross of Nations and his first outing on a 450 machine, the South Carolina native had an incredible showing at Ernee. In qualifying he holeshot his race from 40th gate and led half the race before being overtaken by Romain Febvre, finishing second. The opening moto was almost a repeat performance with the American grabbing the holeshot before a sensational move by Febvre shuffled him back to bridesmaid. A bad start in his final moto saw him battle through the pack to finish sixth, which, as it turned out, was his team’s worst result of the day. Hell of a worst result!

4. Marvin Musquin (France):
France’s 2015 AMA Eastern Regional 250SX Champion came agonisingly close to doing the unthinkable and winning the opening race outright on an MX2 bike. After trailing Justin Barcia off the start, Musquin set the French crowd alight when he caught and passed the 450-riding American for the lead midway through the race, setting a lap time that was two seconds quicker than ‘Bam Bam’. A small crash with six laps remaining saw him finish fourth. In the second MX2 moto, Musquin started sixth and steadily worked his way forward to cross the finish in fourth.

3. Justin Barcia (USA):
The Yamaha rider coming off a strong Pro Motocross season always seems to step up when it comes to the Motocross of Nations and his pace all weekend was right up there with the best of them. Barcia’s moto win in the opening race was the first time an American had taken a MXoN chequered flag since 2011 and he had to fend off a highly motivated attack from Marvin Musquin in the process. A top 10 start in the second moto put paid to both the US hopes and any chance of us witnessing a showdown between himself and Romain Febvre, but Barcia chipped away at the riders in front of him to eventually finish third.

2. Ben Townley (New Zealand):
We’re not sure what it is about Ernee that makes Ben Townley come out with all guns blazing, but his phenomenal 6-2 result this year had people talking just as much as 10 years ago when he won one race then finished a close second to Ricky Carmichael in the other. Here’s a rider who’s a part-time racer and a fulltime dad who still has the pace to contest for race wins against the world’s best. After qualifying second, BT hooked onto the back wheel of MXGP leader Justin Barcia in the opening race before making a mistake and finishing sixth. In his second moto the hardened Kiwi holeshot the race and led for two laps before being passed by Febvre. Instead of letting him pull away though, Townley clung to the Frenchman’s coat-tails all race, finishing just three seconds behind and sending the internet into meltdown with his incredible result.

1. Romain Febvre (France):
It’s official – Frenchman Romain Febvre is the fastest motocross racer in the world. The 23-year-old rode the Open class and, like he has all year, let the rest of the field squabble over the remaining podium places. Febvre won every time he got behind the start-gate, from qualifying on Saturday until the final lap on Sunday, leading his team to defend the Chamberlain Trophy. Febvre wasn’t given the opportunity to check out on the field with Cooper Webb and Ben Townley keeping him honest during his two motos, but to finish on top in every race is a hell of a statement and a perfect way to finish a break-out year for the world champion.