Despite the bitterly disappointing outcome at the hands of the FIM, Australia was head and shoulders above every other country at the 2015 International Six Days Enduro (ISDE) in Slovakia. As well as the controversial second overall in the World Trophy division at the hands of previously disqualified French riders, Australia absolutely dominated the Junior and Women’s classes, making 2015 our most successful year on the world stage. In this edition of Countdown MotoOnline.com.au looks at some of the standout Aussie performers who helped make 2015 a year to remember. 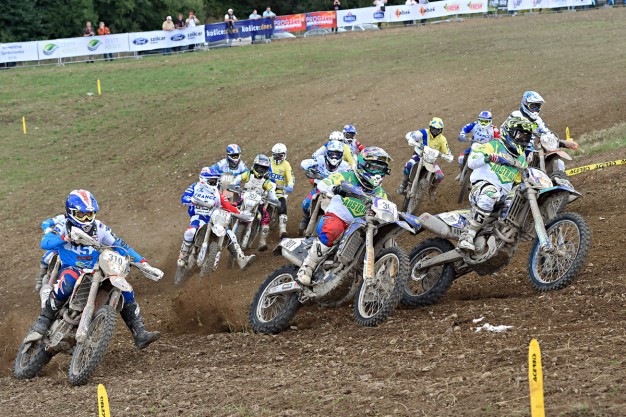 7. The MX rookies:
It’s safe to say motocross converts Tye Simmonds and Beau Ralston have well and truly hit the ground running in the off-road scene, with the pair both finishing in the top 10 of the hotly contended E2 class. Simmonds was fairly consistent throughout the six days with his best result of eighth coming on the second day and his two worst days on days four and five (13th) when the event moved to a whole new circuit from what had previously been used. Ralston took a day to find his feet with a 20th in dry, dusty conditions on day one, but was then a picture of consistency as he chalked up ninth place finishes the next four days. As you’d expect, both Ralston and Simmonds shone in the final motocross test, finishing third and fourth respectively.

6. Lachy Stanford:
Byron Bay’s Lachlan Stanford finished an impressive sixth overall in the E3 class after six days of brutal racing. The Husqvarna pilot shocked the world when he tore the gizzards out of the opening day to finish at the head of the pack, well and truly putting a target on his back for the remainder of the event. Day two was another solid one with a fourth overall, but then an eighth, seventh and ninth over the remaining three days of tests saw him slide down the standings. A sixth in the final motocross test anchored his sixth overall result and ensured that at next year’s ISDE in Spain, the 24-year-old will be watched like a hawk by his rivals.

5. Josh Green:
Yamaha’s Josh Green charged to fifth overall in the E1 class, where he was the sole Australian representative. After chalking up 5-3-7 results over the first three days, the Soldier’s Point local buttoned off the pace once a swathe of French riders were disqualified at the end of Day 3 and focused on bringing home the bacon for Australia. His ninth and 10th on days four and five were more about ensuring he finishing strong and safe for his country instead of pushing hard and crashing out. A vengeful, desperate attempt to put Australia back on top of the podium on the final day saw him register a third in the final moto and complete six days of gruelling riding in fifth overall.

4. Matt Phillips:
Australia’s reigning E3 Enduro World Champion admitted he never really felt at home around the rough and often-dusty stages that made up the Slovakian event. After a fourth and a third on the opening two days of racing in the hotly-contested E2 class, Matt Phillips banged around to seventh on day three. Phillips was one of the Australian riders to button off and bring the good ship home once France’s playmakers were disqualified, finishing eighth and 11th on the new stages used on days four and five. Phillips finished the final moto in seventh. 3. Daniel Milner:
Daniel Milner’s success in the premier E2 class was one of the many highlights to come out of Australia’s camp at Slovakia as he steamrolled the world’s best to finish second overall behind former American motocross racer Ryan Sipes. The US-based Milner was a picture of consistency all six days as he never finished lower than third in the class. After finished second on day one, Milner put his name in lights when he finished at the top of the pile on day two. His super-consistent 2-3-2-2 results over the remaining days saw him comfortably finish second to Sipes in the final wash-up.

2. The Women’s team:
Australia’s Women’s team of Tayla Jones, Jemma Wilson and Jessica Gardiner absolutely destroyed the field this year as they successfully defended their title. The trio ruthlessly put the rest of the class to the sword, finishing with a lead of more than half an hour over second-placed France. Tayla Jones was on a whole new level as she finished on top of the rostrum every day, while Wilson and Gardiner did an incredible job of backing up with consistent results. Finland’s Sanna Karkkainen did her best to break up the trio with a third overall on days two and five, but it wasn’t enough to stem the tide as Australia romped to another ISDE women’s trophy win.

1. Daniel Sanders:
Melbourne’s Daniel Sanders put on Australia’s standout performance of the 2015 ISDE as he stormed to first in the E3 class against a tonne of more experienced racers. ‘Chucky’ was instrumental in guiding Australia to the top of the Junior Trophy podium as he caused havoc with the field every day. In a class that featured the likes of Endurocross king Mike Brown and former MXGP stars Jonathon Barragan and Davide Guarneri, KTM’s Sanders finished second to his E3 teammate Lachie Stanford on day one, then claimed the top spot on days two, three and four. A second on the final day of tests was backed up with an impressive fourth-place moto finish on the final day, stamping his authority all over the competition and ending a 20-year losing streak for Australia’s Junior Trophy team.