The season that was in a drama-packed MX Nationals series.

The 2015 MX Nationals was nothing if not eventful. Past champions returned, others retired, riders found form, while others floundered. After 10 drama-packed rounds the series wrapped up at Coolum on Sunday. With the dust only just settling after an epic season, we look back on the 10 big moments that defined this year’s championship. 1. Gibbs breaks through:
Right from the first gate-drop of the season KTM Motocross Racing Team’s Kirk Gibbs proved he was going to be the man to beat this year. The South Australian never left the podium during the first seven rounds and even on days he was beaten for overalls, he managed to continue stretching his championship lead with vital Super Pole points. Then, to gently bring the silverware home he circulated for 4-4-4 over the final three outings, winning his first national title since his junior days and KTM’s first MX1 championship since 2002.

2. Long’s shot:
Midway through the series Dylan Long received a phone call that he’d been working so hard towards – a fully-backed factory ride. After years operating as a privateer, Long’s seventh position in a choc-full MX1 field attracted the attention of NPS Monster Energy Kawasaki’s Troy Carroll. When Jake Moss sustained his second broken leg of the year, Long was brought into the squad to replace Kiwi Johnny Phillips as the stand-in rider and quickly found his mojo. Within three rounds he found himself on the podium at Nowra and backed that up with a Super Pole win at Toowoomba. He still finished the season in seventh, but it was obvious to all that he could be a title contender next year.

3. Moss hits a bobcat:
By far the biggest talking point of the MX Nationals this year was the horrific crash at Shepparton where Matt Moss ploughed straight into the side of a bobcat while on his Super Pole hot lap. The footage went viral and put Australian motocross on a mainstream stage for all the wrong reasons. Mossy was lucky to survive the brutal crash with a broken wrist, some cracked ribs and a host of other injuries and was sidelined for the rest of the season (he’d already missed rounds due to an Appin incident as well). The incident itself was the result of human error and miscommunication between track maintenance crew, however series promoter WEM along with Motorcycling Australia were quick to investigate and put processes in place to ensure nothing like this happens again. 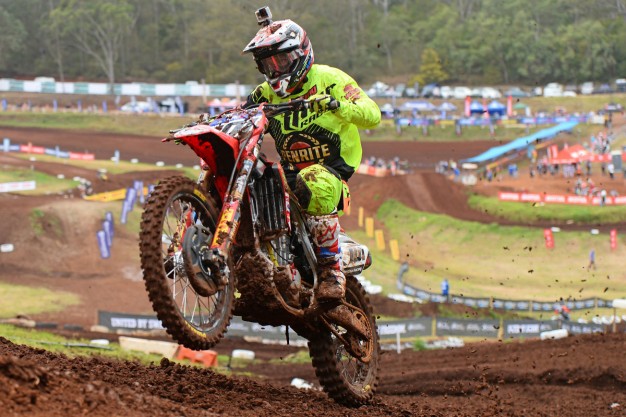 4. The return of Townley and Reardon:
While it wasn’t much of a surprise to see Ben Townley line up for motos this year, his results were nothing short of impressive. For a guy who’s now only racing part-time, he’s still bloody quick. A third overall at Coolum and Toowoomba was backed up with his first overall win since 2012 at the Coolum finale, putting Honda back on top of the box for the first time in years. As for Dan Reardon, his last-minute, left-field inclusion in the CDR Yamaha team blindsided everyone, however he rarely looked out of place, regularly mixing it up at the front of the field and claiming a round win at Nowra.

5. Ward’s scorching form:
Entering 2015 as a serious MX2 title threat, Caleb Ward’s season started slow with a problematic eighth at Horsham then a knee injury at Appin that saw him sidelined until Murray Bridge. But holy smokes, did he come out with all guns blazing in South Oz. A 1-1 result there was just the start as he went on to win a string of overalls at Coolum, Raymond Terrace and Shepparton. But just when it looked like Ward could do the unthinkable and push for a podium place in the championship, the bad start bug bit him again at Nowra and the final round at Coolum, forcing him to settle for fifth in the final standings.

6. Ford Dale retires:
One of the biggest surprises this year – and there were plenty of them – was the sudden retirement of 2012 MX2 champion and Penrite Oils Honda Racing factory rider Ford Dale. Fresh after a lengthy trip to the US where he trained with the GOAT Ricky Carmichael during the mid-season break, Dale announced that his heart simply wasn’t in racing any more and he wanted to focus on his young family. While it was a disappointing career finish for both Ford and the Honda team that helped him to his MX2 title three years earlier, the parting was amicable and there were no hard feelings from either camp.

7. Clash of the CDR teammates:
There was absolute fireworks at the opening MX1 race at Broadford when CDR Yamaha duo Dan Reardon and Kade Mosig clashed while running 1-2 in the race and both went down. Reardon’s water pump was destroyed in the incident while Mosig limped home to 12th place. Understandably, team manager Craig Dack was livid that his two riders had thrown everything away in a moment of red haze and sat them both down and had a long, hard chat with them afterward. Any tensions between the two riders were left behind closed doors from that day on and from the outside at least, it looked like everything had been smoothed over and all parties had put their troubles behind them.

8. Serco’s Murray Bridge shocker:
Until round four of the championship at Murray Bridge, the Serco Yamaha team couldn’t put a foot wrong. New rookie Jed Beaton shocked everyone with a round win on his pro debut at Horsham, then Luke Clout claimed wins at Appin and Broadford. Just when it looked like the pairing would carry on their waltz to a 1-2 in the championship, the wheels came off at Murray Bridge where Luke Clout suffered a huge crash in qualifying that rattled his head and broke his thumb. Beaton fared even worse with a brake pedal issue in the first race, then a crash and broken collarbone in the second. Clout finished the day in 10th and Beaton 21st – results that proved to be the beginning of the end of two riders’ title dreams.

9. Wilson finds form:
Coming off a dominant performance at the New Zealand Motocross Championships, JCR Yamaha’s Jay Wilson was tipped as a big favourite for the 2015 MX2 title. However it wasn’t until the sixth round at Raymond Terrace that he managed to claw his way into the red plate position. From that moment on he was never headed, although it was the final two rounds – immediately after being selected for the Motocross Of Nations team despite not winning an overall – that he really put the hammer down. Wilson won the final three races of the year on the trot on his way to claiming round victories at Toowoomba and Coolum. Where he ends up next year is still to be decided, but it’ll either be overseas or the MX1 class.

10. Yamaha clean-sweeps two rounds:
For a manufacturer, winning a round overall is tough enough. Winning all four classes on the same day is practically unheard of. To do that twice in a year is a mere fantasy, but Yamaha did just that this year at both Appin and Toowoomba where their riders won the overall in every class. On both occasions Kade Mosig (MX1), Wilson Todd (MXD) and Hunter Lawrence (Rookies) stood on top of the box, while in the MX2 class the spoils went to Luke Clout (Appin) and Jay Wilson (Toowoomba). There’s no doubt the blue machines – particularly the YZ250F – were devastatingly quick this year.