Highs and lows from the Coolum finals on Sunday.

MotoOnline.com.au pulls out the microscope and takes a closer look at some of the giant-killers and disappointments from the thrilling final round of the 2015 MX Nationals at Coolum. 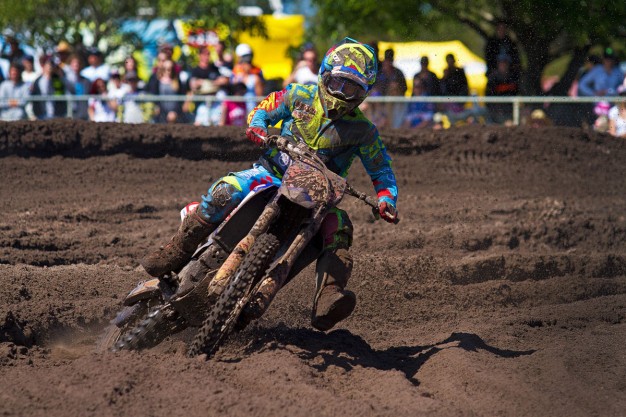 Kirk Gibbs: KTM Motocross Racing Team’s star rider Kirk Gibbs came good on his tag as the pre-season MX1 favourite to emphatically claim his first national title since his junior days back in 2004 and KTM’s first Australian MX1 trophy since 2002. Despite only needing a meager nine points from the round to wrap up the MX1 championship, Gibbs was solid all weekend and didn’t leave anything to chance – after a second in Super Pole Gibbs wrapped up the series in his first race with a third placing. Wanting to finish on a high, the South Australian entered the final moto with all intentions of winning, but a small crash at the end of the moto – as well as some team orders – saw him finish seventh and fourth overall.

Jay Wilson: JCR Yamaha’s Jay Wilson answered the critics of his Motocross of Nations selection in the best possible way by sweeping both motos at Coolum and taking the MX2 title with it. 2015 has been a mammoth roller-coaster for Wilson after his brother Dylan suffered a life-threatening crash at the opening round at Horsham. With Josh Coppins in his corner, Wilson has found more and more speed as each weekend passes and capped the series off by grabbing round wins at Toowoomba and Coolum. With Jay keen to head overseas next year, the victory was perfectly timed and will put him on the radar at the MXoN later in the month. And if he doesn’t go to Europe, chances are we’ll see him step up to MX1 locally.

Ben Townley: The self-professed part-time racer proved he’s still a real class act at Coolum by claiming his first Australian round win since the opening round of the 2012 series. BT came close at the first Coolum round earlier this year, but he was definitely carrying more speed and aggression around the brutal sand track this weekend. Townley won the first moto then backed it up with a solid second to Adam Monea in moto two to win the overall. Including his Super Pole effort, Townley racked up 69 points for the weekend and finished the season in 15th despite only completing three rounds. Luke Clout: As much as we’re pumped for Jay Wilson storming to his first senior national championship, we can’t help but feel a bit bummed for Serco Yamaha’s Luke Clout. After being just three points behind Wilson going into the final two rounds, Clout found himself trying to bridge a 21-point gap entering Coolum. A close second to Wilson in the opening moto made the mountain even taller to climb, but Clout went into the second race with all guns blazing. He holeshot and led the race for a number of laps before cartwheeling and getting stuck under his bike on a seemingly innocuous section of track. By the time he got going he was well down in mid-pack, sealing his fate for 2015 as Wilson romped to a 1-1 result.

Luke Styke: Kirk Gibbs’ teammate left Coolum with a sour taste in his mouth despite a good showing all weekend. Luke Styke holeshot and led at least half of the opening moto before falling into the clutches of a hard-charging Ben Townley, then backed it up with a fifth in the second moto. Styke was helped to that result following some stern team orders to Gibbs – who’d already wrapped up the championship – to let the rookie past in order to get both KTM riders on the championship podium. Despite their best efforts, Styke, who finished tied on points with Adam Monea, finished in fourth for the series because Monz had won more races throughout the 10 rounds. It was a bitter pill to swallow, but will no doubt fire him up for next year.

Caleb Ward: Everyone expected North Queensland shredder Caleb Ward to replicate his devastating form from Coolum earlier in the year again on the weekend. A renowned sand specialist, Ward was the odds-on favourite to again walk away with the wins, but it wasn’t meant to be. Ward’s day was marred with horrible starts and he was forced to battle his way through a tough pack in both motos. A pair of fourths saw him finish the day with the same result and considering his dismal starts, was a fairly impressive result, but we just expected more of him considering his previous form.