Day one of the 2015 Coolum MX Nationals is in the books and, thankfully, the rain held out for a packed day of pro class qualifying and support race action.

While the rain waterlogged the track yesterday, forcing the cancellation of riding at press day, today it turned out nicely and the show went on as planned. Despite the odd shower, it was a relatively dry day of racing.

We’re not 100 percent certain what Sunday’s weather will bring as it has been a real mixture so far, but if it does rain then that could blow the championship deciders wide-open. Hopefully that’s not a factor, but let’s wait and see.

On track today it was once again a Yamaha sweep of sorts, with Kade Mosig, Luke Clout and Wilson Todd topping their respective qualifying sessions. You can read our report here.

And it’s good timing too, because Yamaha Motor Australia has brought along its incredible 60th Anniversary roadshow, complete with all kinds of bikes from the past, and of course the factory teams are in the retro livery to suit. 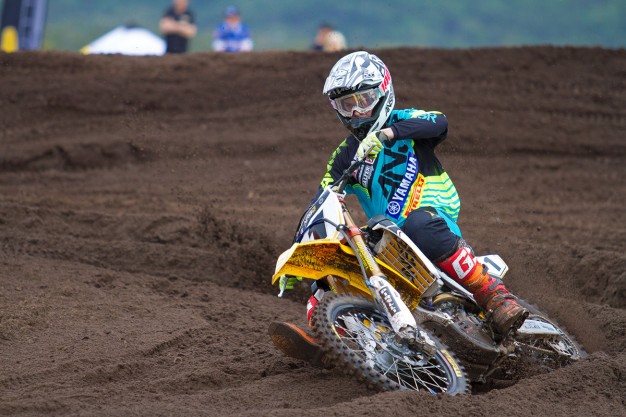 Interestingly, in MX1 qualifying all three riders – Mosig, Luke Styke and Adam Monea – that are in the battle for runner-up in the standings (and Mosig or Styke could still overcome Gibbs if the unthinkable happened according to our calculations) did make Super Pole and every point will count for them as of tomorrow morning.

As for the MX2 battle we’re all anticipating, Clout was able to overcome his troubles from last weekend to lead both practice and qualifying. From a subdued appearance on Friday, he took a lot of confidence from today’s performance.

The ever-impressive Jay Wilson meanwhile is taking all the right steps. He was third, consistently quick, and that’s what it will take to hang onto his 21-point lead tomorrow.

And if he does manage to wrap it up, it’ll be one of the most significant success stories I’ve witnessed during the course of MotoOnline. It’ll also be an amazing accomplishment for Josh Coppins Racing (JCR), going up against the best of Australia’s factory teams on a very light budget. Regardless of results, these people involved can hold their heads high.

So it’s shaping up to be a cracker, the rain’s starting to fall as I write this from our balcony at the apartment, so now’s the perfect time to hand it over to Simon Makker, who’s over from New Zealand for this weekend on deck…

There’s nothing quite like the atmosphere of a final round of the MX Nationals, especially when there’s still so much at stake in each of the classes.

With the finale at Coolum being a two-day affair and a huge number of industry players and sports stars in town, today’s practice and qualifying session already had a hint of a carnival atmosphere to it.

In fact, it was surprising how many spectators were already trackside today watching the amateurs and rookies go at it for their finals, as well as practice and qualifying sessions for the MX1, MX2 and MXD classes.

As far as the racing was concerned though, today was all about Hunter Lawrence. After his outstanding result at the World Junior Motocross Championships last month, Lawrence absolutely tore the Rookies’ field apart in the Coolum sand, snagging two out of three holeshots and dominating every lap of every moto.

It’s situations like that that make you realise just how quick this kid is, and the world is now standing up and taking notice.

Word swirling around the Coolum pits today was that the Queenslander has signed a multi-year deal with CLS Monster Energy Kawasaki factory team in Europe to race the European 250MX Championship for at least the next year or two, then eventually promoting him up to the MX2 World Championship when he’s ready to rumble. 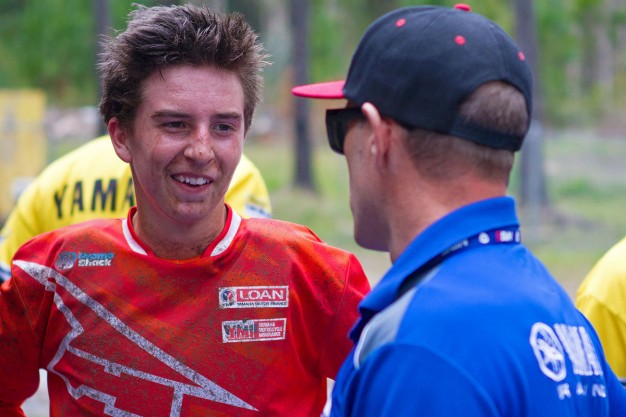 Lawrence’s factory inking signals the first time in as long as I can remember (possibly ever) that an Australian junior has been picked up by a factory European team.

With Kiwi Josiah Natzke securing a similar deal with factory KTM for five years last year, it looks like the South Pacific is now on the radar for European talent scouts – especially if the kids put in the heart and effort to throw themselves in front of the teams on the Euro scene.

As for the premier classes, things are heating up in a big way. Mosig has continued his huge late-season charge by topping the qualifying sheets for tomorrow’s decider.

However, with hot title favourite Kirk Gibbs also making Super Pole, there’s next to no chance that anyone apart from Gibbsy will take the championship. Tomorrow’s racing is practically a formality with Gibbs only needing nine points to claim the crown.

In the MX2 class, defending champ Luke Clout has proved he’s going to leave nothing on the table after topping the qualifying sheets, while series front-runner Jay Wilson was third behind Nathan Crawford.