Riders detail their day at the Toowoomba round of the 2015 MX Nationals. Team and privateer competitors can submit comments to [email protected] prior to the Wednesday after events for inclusion in the post-event Quotebook feature. 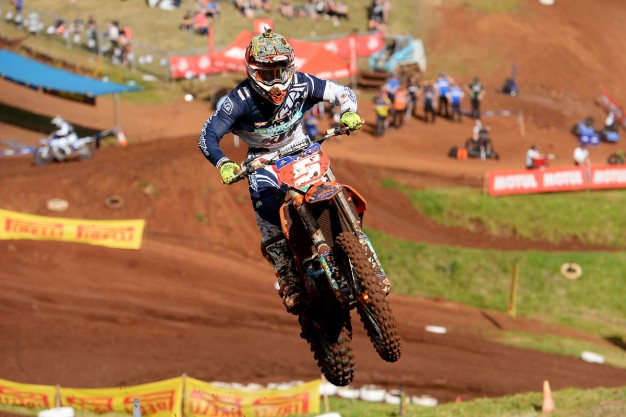 Kirk Gibbs (KTM Motocross Racing Team) – 4th overall:
In the first moto I struggled with the ruts – they moved a lot because they were so moist but when I changed my lines, they were actually worse. Second moto was a lot better, but some dust got blown in front of me coming into turn four and I couldn’t see going into a rut and nearly went down. I was able to pick off some good guys though and make a good charge, but towards the end I just made a couple of little mistakes and those two boys got away. I’m disappointed, but overall I only lost three points. Hopefully we can get this thing wrapped up in the first moto at Coolum and then I can come out swinging and try to finish on a high.

Luke Styke (KTM Motocross Racing Team) – 5th overall:
I just didn’t feel comfortable today, I got a bad start in the first one, and I just kind of chipped away at that. In the second I had a really good start and everyone just passed me, which was frustrating. But we’ll just keep on riding this week and hopefully look forward to Coolum. I’ve slipped into third by nine points now, which is frustrating, having been second the whole year, but we’ll just keep doing what we’re doing, and try to have some fun.

Daniel Reardon (CDR Yamaha) – 6th overall:
Toowoomba has always been a tough track for me and it was again today. I rode pretty tight in the first one and my arms were doing it tough so I was pretty happy to finish third and thought that I could do better in race two. But I had to play it smart in race two when the bike started to play up, so I just did what I could to get some points. It has made me pretty determined to finish the championship out strongly so I’m really looking forward to Coolum.

Kade Mosig (CDR Yamaha) – 1st overall:
I’m pretty pumped about this win. In the first race I had all kinds of pressure from Ben at the end there but I kept my mind on the job and did what was needed to get the win, then in race two, I was the guy trying to make it happen at the end of the race and I was able to pull that one out of the bag as well. The track here is really tough and it always sorts the riders out. The hills are big, the ruts are long and the dirt is hard to read so winning here means a lot as it is a real motocross track. My bike was perfect all day and the team did a great job. Let’s see if we can keep the ball rolling at Coolum next weekend.

Adam Monea (NPS Monster Energy Kawasaki) – 2nd overall:
My riding wasn’t to bad today, it was one of my more consistent rounds. Another trip to the podium overall which is great but to be leading that last moto and to make an error with a lap and a half to go is a little disheartening, but it gives me something to look forward to. A little bit of motivation never hurt, but a win is even better. I’ve got to give it up to the team and everyone who is involved. They put in a massive effort. We’ll move on to round ten and I think well get on to that top step and really have a celebration!

Dylan Long (NPS Monster Energy Kawasaki) – 7th overall:
The track was pretty good. My KX450F was handling awesome and it felt really good out there. This is my second Super Pole that I’ve ever been in and I’m stoked to have come away in first place. I’m feeling alright. A little sore on the right side after that tip over in the second moto, but there were a fair few positives taken out of today, you know? First in the Superpole and in that second race I caught Ben Townley and passed him. He’s a fast rider and I’ve been looking up to him for a long time. I think I got a little nervous up the front. I ended up dropping back two positions and then I was coming back strong again and ended up tipping it over but overall pretty happy with today.

Cody Cooper (Penrite Honda Racing) – 8th overall:
The team has been amazing in accommodating everything I ask for. I am just struggling to find the front-runners’ pace for the entire race. My speed is quite good, but I need to find a little bit more. I am looking forward to the final round at Coolum, I really want to finish the season on a good note.

Ben Townley (Penrite Honda Racing) – 3rd overall:
I had the lead in both motos. My Penrite Honda was fast out of the gate and my Pirelli tyres hooked up really well, but crashing early in the first moto made my job harder than it needed to be. In the second moto I got a nudge from another competitor which I didn’t anticipate and once again I had to come back through. I am not happy with third. My race fitness isn’t where it needs to be but I need to be patient, everything I am doing now is good preparation for Motocross of Nations in five weeks time.

Kale Makeham (Team Motul Suzuki) – 11th overall:
My day was not to bad I guess, not to high not to low. I had some good pace in the first moto but made a few mistakes, apart from that it was pretty uneventful. The track out there on Sunday was unreal, it was a proper motocross track. They prepped it and watered it and had it just perfect. I had a good time riding the track, hats off to the club because tracks like that are hard to come by.

Egan Mastin (Team Motul Suzuki) – 9th overall:
I got off to a good start in the first race and was running inside the top six and was able to hold that position for the majority of the race and everything was feeling good. Unfortunately I had a crash just after the half way point of the race that put me back a couple of positions. Other than the little crash I was very happy with the first moto. The team was awesome to work with all day, they are a great team and were great to work with at Toowoomba. The bike was great as well, I am still getting used to the bike a little, but overall the weekend was very positive.

Aaron Tanti (Craig Anderson Racing Husqvarna) – 15th overall:
It was tough here. The ruts were deep, and they were a different kind with heaps of clay, and there were heaps of downhills into corners where you were really hard on the anchors a lot of the time, it was hard work. I was happier with my second moto, I got a good start from a really wide gate and just went around everyone and came out in like sixth or something. I was running good lap times at the start of the moto, but then the track just wore me out and then I just dropped back and ended up getting 12th. Being a third year air conditioning apprentice, it’s hard work and I don’t get the time to train, but I have to support myself. 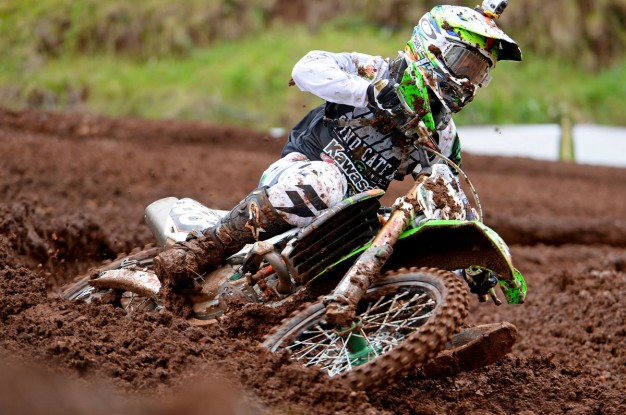 Caleb Ward (KTM) – 3rd overall:
In the first one, I felt like I rode a little bit tight Takka overtook me for the lead, so I just chilled out for a bit and rode smooth. I got my stuff together four laps from the end and put on a good charge. I ended up catching up to him but I just couldn’t get it done. Second moto I got a decent start but I actually lost about 6 places before I got into a rhythm and passed all the way through to second, and if it had have been 30, I probably could have taken the lead. I reckon I was the fastest on the track but I just kind of didn’t have enough time to get it done.

Nathan Crawford (Husqvarna) – 6th overall:
It was a really good motocross track here that’s for sure, ruts everywhere. In that first one I got a good start, but in that second corner, I crashed in this line I found on the sighting lap that looked real grippy. I came into it hot and lost both front and rear. It was the first lap so obviously everyone has passed me, and then I was just fighting my way back and I ended up getting up to ninth. In the second moto I was in second for the first five to six minutes in a pretty tight battle, but I got passed and went backwards, and then I took too long to make my passes so I ended up getting fifth in that moto. I need to get my passes going a bit better.

Takeshi Katsuya (Sony Action Cam Kawasaki) – 2nd overall:
I feel pretty good. Got another moto win which was really good. Toowoomba is my style of track, so I enjoyed it today. I struggled a little in the second moto, but overall it’s pretty good!

Geran Stapleton (Wilson MX Penrite Honda) – 14th overall:
It was a pretty bad weekend for me to be honest. I made a mistake in that first moto which cost me and then was stuck in fourth gear for the whole of moto two. The track at Toowoomba was tough, but I was actually really enjoying it – it’s just a shame that I had bad luck. I’m staying up in Queensland from now until Coolum, so it will be good to get some sunshine and have a bit of fun. Coolum is always a tough track, but hopefully I can pull my finger out next weekend and have a crack before the season finishes.

Luke Wilson (Wilson MX Penrite Honda) – 16th overall:
In that first moto I hadn’t had a lot of time on the bike and I felt it. I pumped up a lot, but the goal on the weekend was to finish both motos no matter what. In the second moto I got the best start that I had got all season and I was actually catching up to Clouty and I hit the back of his bike. I just lost balance and dropped back to 15th which was a bit of a shame. All in all, it wasn’t a bad weekend considering how much time I’ve had off the bike so I’m pretty happy. With the last round at Coolum this weekend, I’m pretty excited to get the motocross season done. Coolum isn’t my favorite track but I had a pretty good result there earlier in the year, so fingers crossed we can pull off something similar this weekend.