CDR Yamaha’s Kade Mosig stitched together the best performance of his career at the penultimate round of the 2015 MX Nationals at Toowoomba on Sunday. The Victorian mastered both the technical track and some intense battles on his way to a 1-1 result in the MX1 class. MotoOnline.com.au caught up with Mosig soon afterward to get his thoughts on a memorable victory. 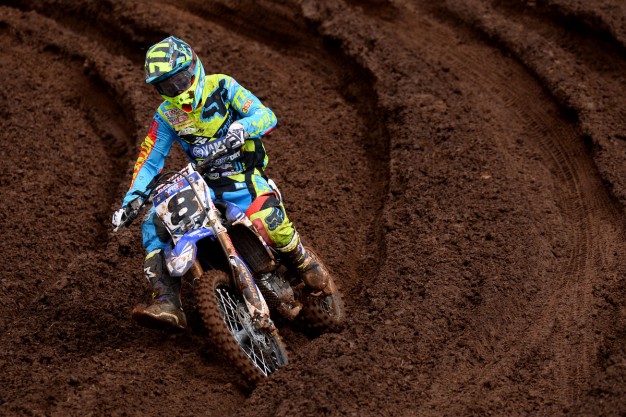 Kade, that was a hell of a strong showing on Sunday. Where does this rate on the highlight scale of your career?

It’s at the top for sure. It was the best result of my career and I’m just ecstatic about it. I’ve been feeling good and have kicked a few goals this year and it’s so motivating to see it all come together. I came into Toowoomba with some good preparation and feeling comfortable after spending a bit of time at Jacob Wright’s place. I put in some good work during the week and on the weekend it all fell into place how I wanted it to. We turned up on Sunday and I felt good right away; I was fifth in qualifying then finished fourth in Super Pole, which is my best qualifying result too.

That first race you had with Ben Townley was about as intense as it gets. How good is something like that for your confidence?

Oh, it’s huge. That first moto with BT is definitely the highlight of my career. Getting to race with an AMA and MXGP champion and go one-on-one was intense. Neither of us backed off for the full race and I had to lay it all on the line to beat him. It was one of those races that I’ll remember for a long time, I think. I just tried to narrow my focus onto the laps and riding as smoothly as possible. It was a close finish, but to get that win was insane mate.

On top of that, you had to work for the second race win too.

Yeah, my start wasn’t quite as good in the second race and I took a little bit to settle into it. It was probably about the halfway mark before I found my rhythm again, then I passed BT, then Longy and I seen Monz ahead with a few seconds gap. I started to feel good again and put on a late charge, then Monz made a mistake that gave me the lead. From there I just had to ride it out for the final laps. The feeling on that last lap, knowing I’d gone 1-1 was crazy. I just had this massive rush going through my body and I had to just tell myself to hang onto it and yep, bang, I got it done.

The track looked great from the sidelines with plenty of passing options. How was it out there?

I’d say it’s close to being the toughest round we’ve had. There are very few tracks that have the elevation changes that Toowoomba does. The club did an awesome job of prepping the track and they nailed the moisture. There were multiple line choices everywhere, ruts downhill and uphill, some areas were really slick and required you to go easy on the throttle, then other areas were really grippy. You really had to read the dirt well and, for me, that track was the best we’ve had all year. Well that was your third overall win of the year now and you’ve now slotted into second ahead of Luke Styke. What’s been behind your sudden show of form?

I started the season strong and did my homework and now I’m finishing strong. The plan all year was to be up there and we’re just working on the basics and focusing on building momentum through the series. This is my first year outdoors with CDR and my second year on a 450, so at this stage you really want to be in a good place and ticking the goals off, which is what we’re doing now. The CDR team has been great and we’ve been learning and building really well together as a team.

There’s a quick turnaround for Coolum this weekend and there’ll also be a two-day format for the first time this year. How does that change how you approach this final round?

Oh come on, mate, I can’t give away my secrets [laughs]! Nah, it’s something different for sure, but I quite often ride my dirt bike more than two days in a row, so it’s not going to be too far from normal for me. But I’m really looking forward to Coolum; it’s been good to me over the years and I love riding sand. I just want to put together two solid motos then whatever will be, will be. I’ll just take each race for what it is.

Got any plans for the off-season?

Not much, really. I’ve got a supercross track to build, so I’ll have to get back home pretty quickly for that. I’ll probably change my track up a bit from last year, add some fresh whoops and some new rhythm lanes, just to mix it up a bit. I’m really excited about stepping up to the 2016 Yamahas for supercross – I rode the production model at the Australian launch event and loved it. There’ll be a bit of testing to get it all set up for supercross, but it should be good.

Great stuff, thanks for that pal. Catch ya at Coolum.