Race Feed will compliment our Livestream posts that you can view by clicking here in 2015, for those who can’t follow it throughout the day. All you have to do is refresh this page as the MX1, MX2 and MXD motos from Toowooomba today pass by. This feature depends on the availability of internet coverage at the circuit. 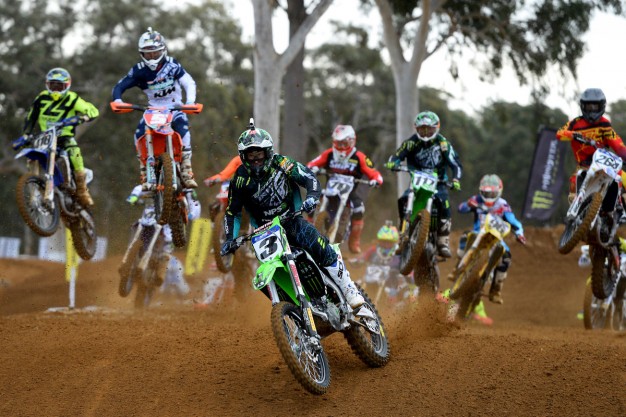 Pirelli MXD qualifying:
Championship leader Wilson Todd set the pace for GYTR Yamaha in MXD qualifying this morning; the track taking shape with every lap as he put down a 1m55.927s laptime. Todd ended the session ahead of Kaleb Barham and the in-form Jayden Rykers, as the top five was filled by Toby Stevens and Jesse Madden. Positions six through 10 belonged to Bailey Coxon, Mitch Evans, Jordan Hill, Zak Small and Connor Tierney.

Motul MX2 moto one:
Sony Action Cam Kawasaki’s Takeshi Katsuya showed he’s not done in the race for the national MX2 crown in moto one at Toowoomba, blitzing his way through the field for a comfortable 2.4s victory over Caleb Ward (KTM). The early stages were led by Luke Clout (Serco Yamaha) before Dylan Wills (KTM) took charge, then it was Jay Wilson (JCR Yamaha) who took over at the front for his turn. Ward was the next to lead in a thrilling fight at the front, however once Katsuya eventually took control he was never headed. Behind Katsuya and Ward was Wilson, while privateer Wade Hunter (Yamaha) finished fourth ahead of Wills – both getting the better of Clout in the closing laps. Jack Simpson (Davey Motorsports KTM) crossed the line seventh, the top 10 rounded out by Jed Beaton (Serco Yamaha), Nathan Crawford (Husqvarna) and Geran Stapleton (Penrite Oil Wilson MX Honda). Nick Sutherland (TM) was an early casualty, crashing on the opening lap and heading directly to RACESAFE for observation.

Monster Energy MX1 moto one:
The first MX1 moto of the round went to Kade Mosig, the CDR Yamaha rider withstanding all kinds of pressure from Ben Townley (Penrite Honda) to take victory by 0.332s. Townley led initially until Mosig took charge and, from there, Townley then raced in the wheel tracks of Mosig all the way to the chequers. Almost 40 seconds behind the duo was Dan Reardon on the second of the CDR Yamahas in third, getting the better of Adam Monea (NPS Monster Energy Kawasaki) for position, while Kirk Gibbs (KTM Motocross Racing Team) crossed the line in fifth riding the 2016 450 SX-F. He held out teammate Luke Styke in sixth, as Dylan Long (NPS Monster Energy Kawasaki) recovered from a bad start to seventh by race’s end. Eighth was Cody Cooper (Penrite Honda Racing), Egan Mastin a solid ninth with Team Motul Suzuki and teammate Kale Makeham 10th.

Pirelli MXD moto one:
GYTR Yamaha’s Wilson Todd was able to extend his advantage in the MXD title chase this afternoon, winning the opening moto of the round by almost eight seconds over Jesse Madden (Suzuki), who was able to beat home Jordan Hill (Yamaha) for the runner-up position. Fourth to finish was Jayden Rykers (KTM), who rebounded from an issue out of the start gates, and Kaleb Barham (KTM) fifth. Second of the factory-supported YZ250Fs Mitch Evans (GYTR Yamaha) crossed the line sixth, while Billy Harth (KTM), Jaiden Corrigan (Yamaha), Tyler Bullen (Yamaha) and Lochie Latimer (Yamaha) were seventh through 10th in the moto.

Motul MX2 moto two:
In moto two of the MX2s Wilson claimed a pivotal race win to extend his championship buffer, taking over from initial leader Wills and going on to take a two-second victory – sealing his first overall of the season in the process. Wilson now carries a 21-point lead in the standings with one round remaining at Coolum next weekend. Behind him in moto two, Ward rallied to second after circulating outside the top 10 early on, with moto one winner Katsuya taking home another podium in third. Wills crossed the line fourth, holding Crawford at bay to the end, while Dean Porter (KTM) improved for seventh this time out, followed by an impressive Richie Evans (Yamaha), Clout – who has been plagued by bike problems all day – and Hunter. Overall it was Wilson the round winner, joined on the podium by Katsuya and Ward.

Monster Energy MX1 moto two:
It was another thrilling MX1 moto as Townley led from the start, setting the early pace, before Monea then took his turn at the front and looked like a sure winner until a late mishap cost him the moto. That enabled Mosig to take over at the front of the pack and claw his way to a second moto victory of the day, this time by near 14 seconds and sealing the overall in the process – his third of the season. Gibbs snuck home for third in moto two, comfortably ahead of teammate Styke, while Townley recovered from an error of his own to cross the finish in fifth. Sixth was Long in a consistent effort, while Cooper, Reardon, Bopping and Mastin filled the top 10 placings. The overall belonged to Mosig and he managed to take control of second in the standings, from Monea and Townley. Gibbs will enter Coolum’s final round with a 61-point advantage over Mosig, with Styke a further 10 points behind in third. Monea is also in the mix for the podium, just five points behind Styke now.

Pirelli MXD moto two:
The second MXD moto of the weekend saw Rykers rebound for a comfortable race victory, crossing the line six seconds ahead of Todd, who in turn took the overall round victory. Hill was also in the podium running before he posted a DNF, resulting in Madden taking another podium result, from Evans, Coxon, Parker, Tierney, Barham, Ryan Eden (Yamaha) and Corrigan. The round podium featured Todd from Rykers and Madden, while in the standings it’s Wilson who will carry a 22-point leading into Coolum’s 10th and final round next weekend.