Two of the most important weekends in Australian motocross have arrived, beginning this weekend at Toowoomba before heading to Coolum next week for the final MX Nationals rounds of the season.

Toowoomba’s first up and teams are assembling at the well-known Queensland venue as we speak, marking the series’ return for the first time since 2013.

There’s a good chance that KTM’s Kirk Gibbs will clinch the MX1 crown on Sunday after what has been a flawless season to date, while MX2 is shaping up to go all the way down to Coolum’s final moto between Jay Wilson and Luke Clout.

Motivation should be high between the pair entering this weekend, with Wilson getting the nod for Team Australia at next month’s Motocross of Nations (MXoN), much to the dismay of Clout.

The script couldn’t have been written much better considering Wilson got axed from Serco Yamaha in favour of Jed Beaton at the end of last year, and even though he’s still on a Yamaha through the JCR program, you can guarantee it’s a sweet feeling every time he manages to beat the official factory team. 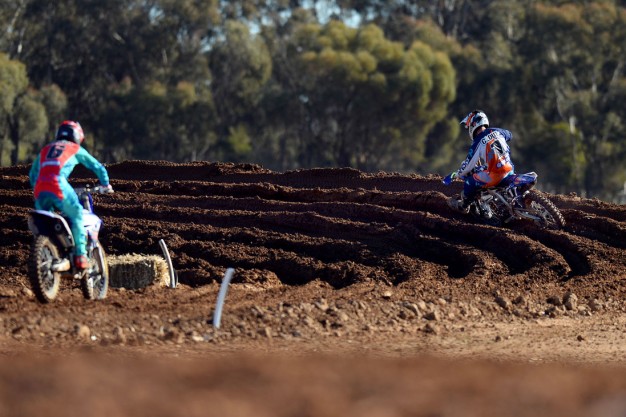 Who will win? That’s too hard to pick at the moment (and we can’t completely rule out Takeshi Katsuya just yet, now 30 points in arrears), but I have a feeling it will come down to who can minimise mistakes and withstand pressure at the business-end of the year.

While on the topic of MX2, we did a news story yesterday detailing Kyle Webster’s signing at SFC Racing. His trick all-black Yamaha YZ250 set social media alight, breaking a few of our MotoOnline records along the way and it will be interesting to see what he can do in the switch to a two-stroke.

Unfortunate news for the Queensland rounds is that Jesse Dobson and Luke Arbon have both been sidelined, the Husqvarna pairing absent this weekend and again at Coolum.

Dobson has had another promising season in MX1 and will probably stay inside the top 10 overall, however Arbon’s year in MX2 has been disastrous, battling injury and illness along the way after a breakout season one year ago.

One storyline I’m probably most looking forward to seeing is Egan Mastin on the factory Team Motul Suzuki in place of reigning champion Matt Moss.

The team’s had a tough year to date with Moss’ injuries and Kale Makeham not meeting expectations, so the addition of last year’s MXD title winner Mastin has put a bit of spring back in their steps at Suzuki. And I think he will surprise many.

Of course, Ben Townley has overcome his shoulder injury that ruled him out of Nowra, back at Penrite Honda alongside Cody Cooper this weekend and that will once again be to the delight of our Aussie fans.

So there’s plenty to watch for in these remaining MX Nationals rounds and we’re extremely excited to head to Queensland this afternoon for what’s left of the season.

Next Thursday, 27 August, will be the Racing 4 Disabled (R4D) Charity Golf Day presented by MotoOnline.com.au at Palmer Coolum Resort, so we’re very excited and fortunate to once again be part of that fundraiser – and great day out – with the R4D crew. Meanwhile, all eyes will be on Ironman Raceway in the US tomorrow morning for the final round of the Lucas Oil Pro Motocross Championship season, where Jeremy Martin and Marvin Musquin will take the 250 Class down to the wire.

Like the Aussie series, it’s near impossible to clearly pick a winner at this point, so may the best man win as it all goes down to the final round.

Rumours spread that Ryan Dungey would be stepping back to a 250 to help out Musquin, but we haven’t seen any real indication that he will – and he said as much earlier in the week that he wouldn’t be – so it looks like its Marvin vs the Yamahas of Martin and firey teammate Cooper Webb.

Pretty much everybody would have seen the jaw-dropping interview with Ken Roczen’s father, Heiko Klepka, from earlier this week, which Roczen has since attempted to play down in a Racer X interview. We’re not sure what to say about this one; it’s incredible to read and will more than likely increase tensions all-round.

And before I wrap things up here, make sure if you haven’t already that you check out Chad Reed’s social media for an assortment of content featuring him on board the 2016 Yamaha. We haven’t had confirmation what his program will be like next year, but it’s obviously becoming more and more likely that the YZ450F is his bike of choice as initially predicted.