The Suzuki RM-Z450 is one of those bikes that needs little introduction, with its success racing here in Australia with Matt Moss as the current two-time MX Nationals champion, along with multiple titles around the globe.

Recently MotoOnline.com.au was fortunate enough to ride the 2016 Suzuki RM-Z450 model and put it to the test. Although there have been little changes to the new model, Suzuki has refined the package of its MX1 entry.

First impression when riding the RM-Z450 is that the seating position makes you feel at one with the bike. This is something that gives you confidence to go that little bit faster on the track and try to push the bike to its limits.

In addition, Renthal Fat Bar tapered handlebars are the perfect match for this package, allowing you to get in the perfect position on the bike throughout the turns and over the jumps. 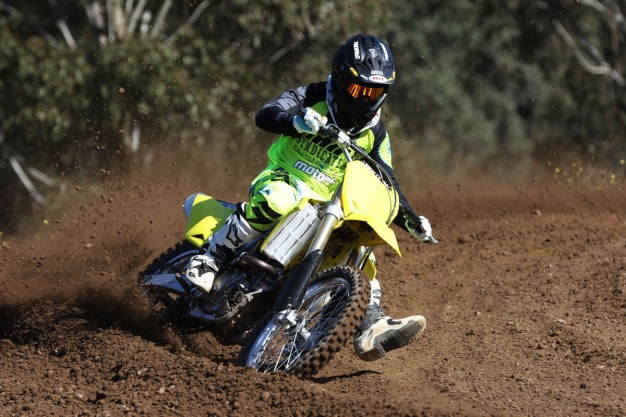 In 2016 Suzuki have stuck with the Showa SFF-Air Fork, which was introduced on the 2015 model and it was a step in the right direction apposed to the previous spring forks. I haven’t had a lot of experience with the Showa air fork, so this was a great chance to spend some time on it get a good feeling for it.

It had a harsh feeling when I first went onto the track and I was finding that the front wheel was pushing in the turns, but then I started to get a feel for it and surprisingly, the harder I pushed the bike, the more confidence I was gaining.

The 2016 Suzuki RM-Z450 was responding around the turns, giving me better tracking on the front tyre, but when jumping the bike I was getting a stiff feel when landing. At first we made some adjustments to the damping side of the forks and I wasn’t finding that it was providing the feeling I was looking for, so then it was to the air side of the forks. With technology these days and a smartphone in your pocket, Showa has designed an App for setting air pressures in your SFF-Air Forks and also what the effects are for changing the pressures within the three different chambers.

After working through a few different combinations, the best way to fix the feeling I was getting was to equalise the pressures and make the balance-chamber and inner-chamber the same pressures (180psi). By doing this I was able to get the feel I was chasing and this is the great thing about the Showa SFF-Air Forks; they’re cost-effective when you want to adjust your suspension.

We set the rider sag on the rear spring to 104mm and this made the bike feel well balanced on the track, not letting it lift up in the rear when braking for the turns. It added to the stability as well, with minor adjustments making me much more comfortable at speed.

The front brake rotor has been revised for the new year, offering a progressive, consistent feeling, but it’d be hard to ‘feel’ the benefits or difference between this and the 2015 apart from minor weight savings. The motor on the 2016 Suzuki RM-Z450 still maintains that great power delivery, with the bottom-end power and throttle response available on demand at the throttle. As soon as it’s twisted, the response is instant and aggressive, making the RMZ-450 launch out of the turns.

The torque that is produced from the engine is strong, letting you make your gear changes early in the rev range and you can really feel the bike pulling out of the turns and up the hills. In turn, this also help the bike stay stable over the acceleration bumps and it tracks quite well.

There’s once again an additional two fuel-setting couplers, so that riders can adjust the engine performance to suit varied track conditions. By plugging in either of the couplers, you can opt for a richer-than-stock or leaner-than-stock fuel setting. Included with the bike, these couplers can be easily plugged in trackside and they do make a major difference in the power delivery. The Suzuki Holeshot Assist Control (S-HAC) returns for 2016. Suzuki’s launch control system gives you the option when trying to get that perfect holeshot to select from three modes. There’s standard power launch, where there is no action required, A-mode is for a hard or slippery surfaces, while B-mode is for tackier starts.

To activate the launch control’s A-mode you simply just hold down the S-HAC button for 0.7 seconds and the light will flash slowly. I liked the feeling that this mode gave the bike, making the power delivery a lot smother and not too aggressive for a strong jump.

B-mode is for when there is really good grip and you want to have a more aggressive power delivery. To activate this you hold the S-HAC button for more than 1.8 seconds and the light will flash fast. I didn’t feel a major difference from this to no launch control at all and it felt quite similar, but it was sill good to have another option if the conditions suit.

Available now at $10,990, Suzuki has released another capable option with the 2016 RM-Z450, and although its changes are minor, chances are you’ll find a lot of confidence in this proven, reliable package. Check out www.suzukimotorcycles.com.au for further information.