Toowoomba will host the 2015 MX Nationals, Australian Motocross Championship, this weekend as MotoOnline.com.au previews the ninth stop of the season in our revamped Fan Guide. 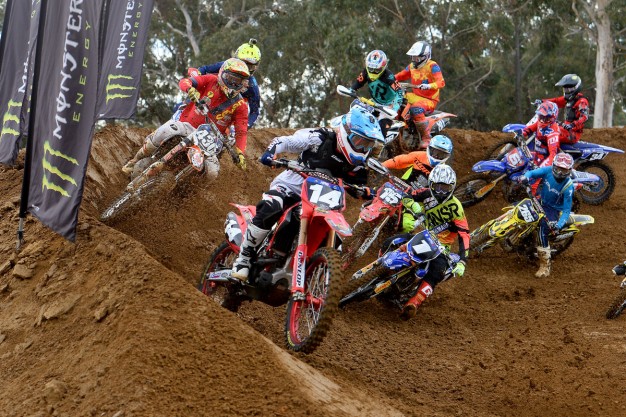 The favourites:
Kirk Gibbs (MX1) – Gibbs was second overall with a 2-1 scorecard at Toowoomba two years ago when the series was last hosted at Echo Valley. On the brink of clinching the 2015 MX1 crown and now on board the 2016 KTM 450 SX-F, we’re thinking he’ll win it in style on Sunday.

Luke Clout (MX2) – There’s no doubt that being left off the Australian MXoN team has fired Clout up, to the extent that he could take control this weekend. It will be up to Wilson to respond, but there’s every chance Clout will peak over the next two weeks.

The threats:
Dan Reardon (MX1) – Reardon has been building toward and overall win all year and finally did that at Nowra last time out, so now with the pressure off we expect him to be even stronger at the final two rounds. Will it be good enough to win again? Two more overalls will do wonders for his 2016 prospects.

Jay Wilson (MX2) – Still holding onto the red plate, this title is currently Wilson’s to lose. He needs to stay on form regardless of the immense pressure he has, minimise mistakes and rise to the occasion. A good result here would set him up well for Coolum.

The darkhorses:
Luke Styke (MX1) – Styke clinched his 2013 MX2 title last time the series visited Toowoomba, winning overall via a 1-1 performance that will hold great memories for him. Like Gibbs, he’s now armed with the 2016 KTM 450 SX-F.

Dylan Wills (MX2) – There were a lot of people pumped for Wills a few weeks ago when he raced to that moto two win at round eight, so with his confidence at a high, taking home more good results will cap off his breakout year.

Live streaming via series partner NRGTV will be available to view on Sunday via MotoOnline.com.au to compliment our website and social media coverage at each and every round of the 2015 season.