Kurri Kurri local Beau Ralston completed his successful transition from professional motocross to off-road racing by claiming the Yamaha Australian Off-Road Championship E2 crown over the weekend at Monkerai, NSW. The 24-year-old Active8 Yamaha racer held off a swathe of talented contenders to claim the team’s second title for the year, with his teammate Josh Green taking out the E1 title the day prior. Fresh off his win and a big night of celebrating, MotoOnline.com.au caught up with Ralston to get his take on a memorable weekend. 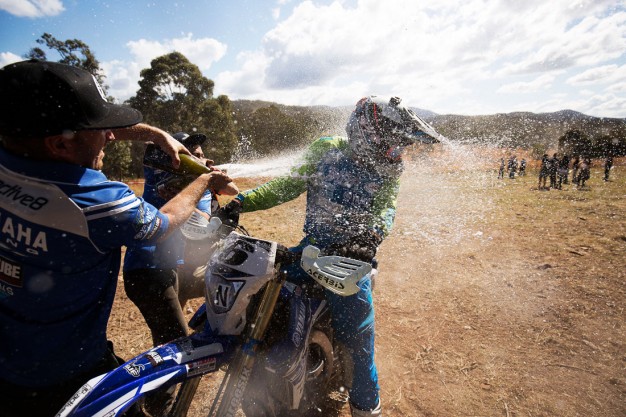 Beau, congratulations on wrapping up the E2 championship, mate. Correct me if I’m wrong, but that’s your first national title, right?

Yeah it is. It’s unreal to wrap one up and I can’t really describe how I feel at the moment. It’s just a big blur. I work pretty hard and I put a lot of pressure on myself to do well, so to get the monkey off my back is the best feeling. Now I can just line up and not stress about earning that first one again. I’m just going to keep working hard and hopefully I can start racking them up now.

How was the weekend at Monkerai?

It was up and down to be honest. Overall it was a good weekend and the track was really technical, which is what I like. On Saturday I was fourth Outright and second in the class. The next day I had a few crashes and that put me back, but I had some good tests in there as well. When it came down to the crunch I knuckled down and did what I had to do to take the title. It came down to a battle between Chris Hollis and I. If he won on Sunday I had to get top seven in the class and I ended up fourth by a couple of seconds. There were four or five guys that were only a couple of seconds apart every test and there was plenty of tight racing. With Toby going to Dakar next year, the depth of talent in Australia is looking so promising. 2016’s going to be a tough year.

When did you know you’d sewn the title up?

I knew what had to do on the day and finish in the top seven. In the last test I was sitting in third or fourth and I knew that if I stayed on the bike I’d have it wrapped up. It was a test that I’d struggled on all day and crashed several times on, but that one lap where I had the most pressure on me, I finally relaxed on it and managed to nail it. When I got to the finish the team guys were waiting and they were cheering and sprayed the crap out of me with champagne. Nothing has tasted that bad and that good at the same time!

It’s a stacked E2 field this year with Hollis, Lachy Stanford, Tye Simmonds, etc, in there. That must make this title all the sweeter.

For sure. I’m over the moon to get over the top of those guys for the championship. It’s so stacked and we all seemed to have bad days this year. No-one was consistent. Hollis had a couple of DNFs, I did, Tye did… it was up and down all year and it came down to the final day of racing to get it done. 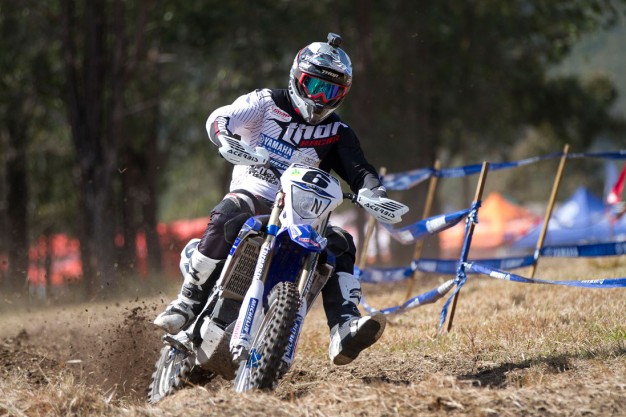 Coming from a motocross background, what’s been the biggest thing you’ve had to learn about off-road racing?

Mainly pacing. Last year I went at everything like a bull at a gate and I was always going too fast and hitting trees or taking wrong lines. I’ve learnt to be patient and pick my lines rather than being on the charge everywhere. It’s a real balancing act though, as I get to some tests and think ‘okay, this is one where I have to be patient’, but then I’ll be too patient and lose time to the others anyway! The other thing is having a good memory to remember the tracks. We do a track-walk, then one signing lap, then we race. I have the memory of a goldfish and trying to memorise six- to seven-minute laps at race pace has been a challenge.

It was a bloody good weekend for the Active8 team winning two of the three titles. There must’ve been a pretty decent party on Sunday night!

[Laughs] yeah it was good. The whole team’s worked so hard and well together all year and it was good to repay our mechanics, AJ Roberts and everyone else with two championships. We had a few beers that night… actually, that’s probably a bit of an understatement!

Classic. Now I guess your attention moves to the ISDE in Slovakia in two weeks time?

Yep. It’ll be the first time I’ve represented Australia and it’ll also be my first trip to a non-English-speaking country. It’s sorta hard to say what I want to achieve there as I don’t know where everyone else in the world stands compared to us. My goals are just to go and learn as much as I can for racing here and for future Six Days. For me, I’m addicted to improving and I’m always wanting to learn and get better.

Nice work, mate. All the best for the upcoming ISDE and Aussie Four Day in Tasmania.

Thanks mate. Speak to you again soon.