Newcomers of the national MX1 and MX2 categories.

MotoOnline.com.au picks five rookies who entered the pro classes this year and dissects their performances throughout the 2015 MX Nationals. Rider: Aaron Tanti
Team: Craig Anderson Racing Husqvarna
Class: MX1
Rating: 3/5
Rundown: It takes a lot of guts to leapfrog straight from MXD to rumble with the big kids in the MX1 class and we give Aaron Tanti a lot of kudos for doing just that. Currently sitting just outside of the top 10 (11th), Tanti consistently circulates between 10th and 15th overall. A DNF at Coolum hurt his results, but considering the kid only finished seventh in MXD last year, he’s doing a pretty good job of holding his own in the premier class. A crash in the opening race at Nowra left him with a trip to the GP to X-ray his ankle, so it’s uncertain as to whether he’ll be behind the gate at Toowoomba in two weeks time.

Rider: Jed Beaton
Team: Serco Yamaha
Class: MX2
Rating: 4/5
Rundown: A direct result of Yamaha’s selection and retention program, GYTR Yamaha-mounted Jed Beaton had a great year in 2014 before breaking his leg. Serco Yamaha gained his signature at the expense of current MX2 series leader Jay Wilson and Beaton instantly repaid the favour with interest with a breakthrough MX2 win at the 2015 opening round at Horsham, then finished second overall two rounds later at Broadford. The wheels fell off at Murray Bridge when he broke his collarbone and since then he hasn’t managed to find his way back onto the podium, although he’s been a consistent top 6-8 finisher.

Rider: Nathan Crawford
Team: Husqvarna
Class: MX2
Rating: 3.5/5
Rundown: One of the kids who was tipped to be a 2015 dark-horse during pre-season bench-racing following his second overall in the 2014 MXD championship, Nato Crawford has shown glimmers of incredible pace and form, but has struggled to find consistency in the MX2 class. His remarkable second overall at Coolum (including a race win) and a fourth overall last weekend was off-set by a mechanical DNF at Raymond Terrace and a DNF-DNS result at Broadford. He’s certainly starting to find his feet and becoming more consistent as the series enters its final stages and will definitely be a threat next year. 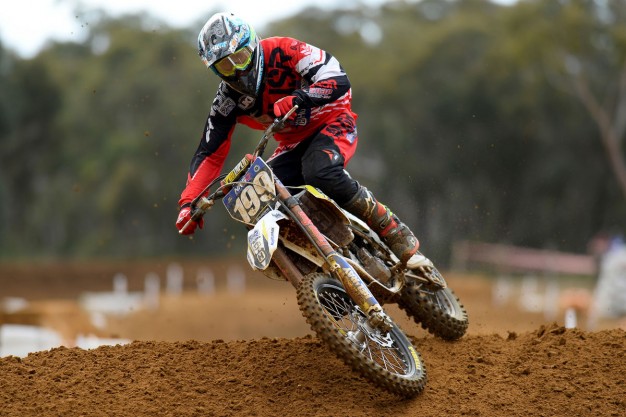 Rider: Jack Simpson
Team: Davey Motorsport KTM
Class: MX2
Rating: 2.5/5
Rundown: Of all the highly fancied youngsters infiltrating the pro ranks this year, Victoria’s Jack Simpson has probably had the roughest transition. After placing third in MXD last year, the KTM rider has struggled to find the same form in the ultra-competitive MX2 field. With two rounds remaining he’s sitting in 11th position, but without a sudden burst of form, it’s going to be a tough ask for him to make up 50 points on 10th-placed Geran Stapleton. In general terms, Simmo has usually experienced one reasonable race and one shocker at each round. A sixth in one of the two races at Coolum was the highlight of his season to date and gave us a glimpse of what the likeable fella is capable of.

Rider: Dylan Wills
Team: KTM
Class: MX2
Rating: 3.5/5
Rundown: One of the late-season revelations to come out of the MX2 class this year is MotoOnline’s own test-demon Dylan Wills. Willsy has shrugged off a slow, inconsistent start to the MX2 championship marred with crashes and mechanical issues to hit his straps at the halfway mark. The KTM pilot shocked everyone with a race win and third overall at Raymond Terrace, then scored the same result at Nowra on the weekend. With two rounds remaining, Wills is eighth overall in the MX2 class, sandwiched between the aggressive Nathan Crawford and pre-season title favourite Luke Arbon. With his best overall results seeming to come from hard-pack tracks, Wills could again be a podium contender at the penultimate round in Toowoomba.