Race Feed will compliment our Livestream posts that you can view by clicking here in 2015, for those who can’t follow it throughout the day. All you have to do is refresh this page as the MX1, MX2 and MXD motos pass by. This feature depends on the availability of internet coverage at the circuit. 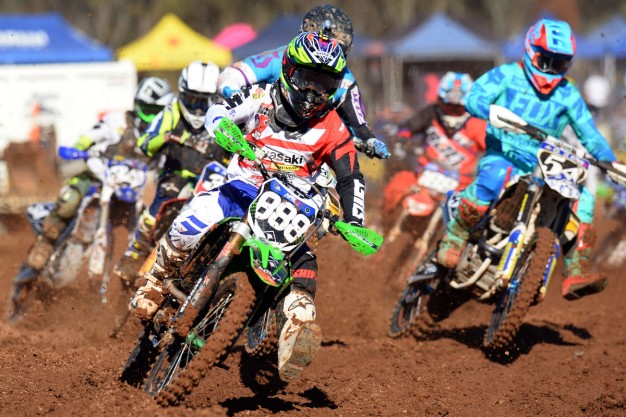 Motul MX2 qualifying:
The MX2 pole position went to Serco Yamaha’s Luke Clout in a continuation of his form, setting a benchmark of 1m42.578s to edge out title rival Jay Wilson for a Yamaha 1-2 and in-form KTM privateer Dylan Wills. Fourth was Nathan Crawford from Taka Katsuya, Jed Betaon, Caleb Ward as he targes a fifth-straight overall, and Cody Mackie a solid eighth in a guest appearance at his home round. The top 10 was completed by Geran Stapleton and Wade Hunter.

Monster Energy MX1 qualifying:
KTM’s Kirk Gibbs scored the Super Pole at Nowra to extend his championship advantage, posting a 1m42.306s lap to lead Dan Reardon, provisional pole-setter Lawson Bopping, Luke Styke in his first Super Pole appearance and Kade Mosig. The top 10 was completed by Adam Monea, Jesse Dobson, Cody Cooper, Dylan Long and Daniel McEntee in his best showing of the season. A mishap for Ben Townley upon return has ruled him out of the round altogether, suffering a shoulder injury early on in the session.

Motul MX2 moto one:
The opening MX2 moto was controlled by Luke Clout at the front of the field, shadowed by Nathan Crawford throughout the moto for an eventual 1.9s victory. Behind Crawford was a charging Jay Wilson, who came all the way through the field for third – pressuring the leaders during the final laps. It was a strong fourth for Geran Stapleton, who in turn held off Dylan Wills as he ran up front early before going down and clawing his way back to fifth. Upon return to racing Keiron Hall put in an impressive ride to sixth, ahead of Joel Wightman, Takeshi Katsuya, Jack Simpson and Jed Beaton. The latter pair were also up front early before mid-moto mistakes bumped them down the order. Notable names outside of the top 10 included Cody Mackie in 12th, Caleb Ward a lowly 13th and Wade Hunter 21st after lapping inside the top five during the opening laps.

Monster Energy MX1 moto one:
A close opening MX1 moto saw Dan Reardon take a tight victory, just over a second clear of fast-finishing teammate Kade Mosig, who made his way past Adam Monea in the closing stages and put on a charge. Monea was able to hold on for third, comfortably ahead of Lawson Bopping and championship leader Kirk Gibbs, who held position on circuit for the majority of the laps. Pressuring Gibbs all the way to the end was hometown hero Luke Styke, after he worked his way forward throughout the moto. Dylan Long ended up seventh at race’s end, over Jesse Dobson, Kale Makeham and Cody Cooper, who had to come from the back of the pack to sneak into the top 10 at the end.

Pirelli MXD moto one:
Jayden Rykers made it three MXD race victories in a row during moto one, sprinting to the race lead on his 250 SX and maintaining that advantage over championship red plate holder Wilson Todd, who was ahead of Raceline Pirelli Suzuki’s Jesse Madden. Second of the GYTR Yamahas Mitch Evans crossed the line fourth at the end of the moto, as title contender Connor Tierney wound up fifth. The top 10 positions were filled by Toby Stevens, Zak Small, Bailey Coxon, Blake Parker and Jordan Hill.

Motul MX2 moto two:
In moto two of the MX2 category Dylan Wills scored his second race win of the season, overcoming Luke Clout in the early stages and maintaining the lead from there. Wills was in charge out front and eventually won by over six seconds from Jay Wilson, who made an important pass on Clout in terms of the championship for position. Clout was able to hang onto third for the overall victory. The fourth position in the moto was an improved showing from Taka Katsuya, while Keiron Hall again featured on his way to fifth. Positions six through 10 were filled by Jed Beaton, an improved Caleb Ward – who saw his win-streak end at four in a row -, Wade Hunter, Nathan Crawford and Jack Simpson. Overall it was Clout the victor, pulling back three points on Wilson in second, and Wills third overall.

Monster Energy MX1 moto two:
NPS Monster Energy Kawasaki stand-in rider Dylan Long took a convincing maiden MX1 race victory in moto two this afternoon at Nowra, passing experienced Kiwi Cody Cooper for the lead in the early stages and was never headed. Long won by around 3.5s and secured third on the overall podium in the process, while second in the race delivered Dan Reardon his first round win in his comeback with CDR Yamaha. Reardon was able to hold onto position ahead of Luke Styke, who in turn edged out KTM teammate Kirk Gibbs, and fifth-placed Kade Mosig, who was third overall. Also finishing in succession on track was Adam Monea in sixth. Early leader Cooper claimed seventh, the top 10 rounded out by Lawson Bopping, Kale Makeham and Jesse Dobson.

Pirelli MXD moto two:
In moto two of the MXDs Jayden Rykers was able to make it four-straight moto wins, taking back-to-back overall round victories and moving into second in the championship as a result. Rykers is now 18 points behind GYTR Yamaha’s red plate holder Wilson Todd, who led the race before Rykers charged forward, and finished second overall. Third in the moto resulted in third overall for Zak Small, making it three different manufacturers on the podium for the round. Jordan Hill climbed to fourth in the final outing, as Mitch Evans, Connor Tierney, Jesse Madden, Kaleb Barham, Trent Wheatley and Lochie Latimer were the top 10 placers.