It’s all systems go this weekend as the MX Nationals embark on the Nowra round for Sunday’s eighth round of the 2015 championship. Now is crunch time for those in the championship hunt and every lap of every moto will count from here especially.

There’s been mixed feelings about the Nowra Motoplex in the lead-up, featuring a slick, hardpack surface that will require maximum concentration all day long tomorrow, but that’s why we go racing over 10 rounds – mixing it up on all kinds of circuits and terrains along the way.

In this week’s Fan Guide I put Luke Styke as the favourite for MX1 and I honestly think he will do the job. Of course, things will have to go his way, but being that he lives 10 minutes from the facility and has been working as hard as ever in the lead-up, expect a strong performance. 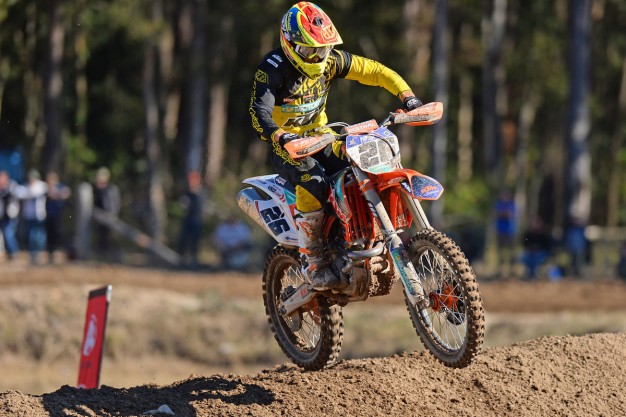 We won’t see Team Motul Suzuki’s Matt Moss back in action at Nowra or for the remainder of the outdoors following his scary shunt into the bobcat at Shepparton. I spoke to Mossy briefly on Friday and he’s out of hospital and on the road to recovery, but has been advised not to speak about the accident at this point.

Series promoter Kevin Williams spoke to us about it last week in detail and there will be new systems in place as of Nowra and moving forward, but when Moss is able to we will get his take on what happened as well.

It’s also been confirmed that SFC Racing Yamaha-mounted privateer Dan McCoy will be sidelined on Sunday, battling a bout of Epstein Bar. McCoy has had all kinds of bad luck this year, but hopefully come supercross he will be recovered and up front as per usual under lights.

Penrite Honda Racing will be back to two riders on Sunday with Ben Townley joining fellow Kiwi Cody Cooper for the final three rounds. I’m particularly interested to see Townley at Nowra and Toowoomba as well, before we go back to Coolum for the finale. He will be strong no doubt, adding to the mix across a stacked premier class grid.

Another surprise returnee is Cody Mackie, who will line up with support from Kawasaki Motors Australia in MX2 after taking delivery of a KX250F just recently. And wrenching for Mackie, funnily enough, is longtime friend and supporter Johnny McLean, of Lusty Industries – that will be good to see!

MXGP will continue this weekend at Lommel, where Todd Waters will make his second appearance on the 2016 Husqvarna FC 450 after cartwheeling it on debut last weekend in the Czech Republic. A mid-air clash with Shaun Simpson fired up social media this week, so here’s hoping he can make better use of the new bike this weekend. Speaking of the new Huskys, MotoOnline.com.au test rider Ryan Marmont will be flying back to the US next week (his third time in just a couple of short months!) to sample the 2016 range at Budds Creek’s US press intro. We’re excited for that one, no doubt.

Next week will be a busy one with the launch of the 2016 Yamaha YZ450F in Australia as well, followed by Yamaha Motor Australia’s 60th anniversary celebrations so that will be a really special event to cover and be a part of.

And before I go, our friends at Racing 4 Disabled (R4D) will once again be hosting the Charity Golf Day on Thursday, 27 August, in the lead-up to Coolum’s MX Nationals final round. It’s an awesome day out and a great initiative to raise money for injured riders, so we’re proud to be back on board as presenting partners. Email [email protected] to register your team.