In this edition of Countdown, MotoOnline.com.au pin-points 10 emerging stars and rookies (ie. not current pro class national or world champions) who we reckon have the mettle become the next big names in motocross around the globe. 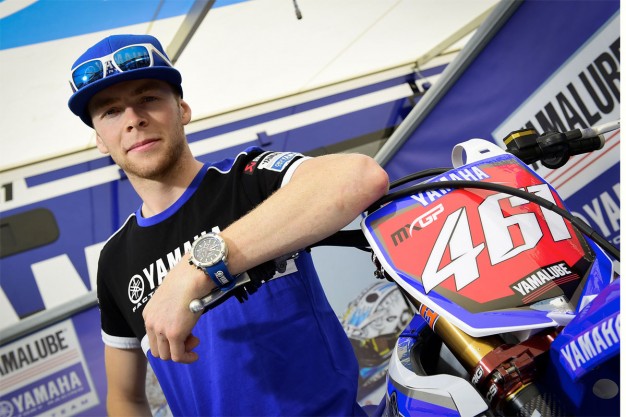 10. Luke Styke:
The tearaway 2013 Australian MX2 champion spent a roller-coaster season in Europe last year with what he describes as a less than average team arrangement. However, the speed he picked up over there in the GPs is more than noticeable now that he’s back in Australia. In his rookie MX1 year the South Coaster is an impressive second to his more established teammate Kirk Gibbs and has proven he has the pace to win races and rounds. He’s made no secret that he has unfinished business overseas and if the right team offer comes up he’ll jump at it in the next year or two.

9. Caleb Ward:
Since midway through 2014, North Queensland’s Caleb Ward has been on a whole new level from the rest of the MX2 field. Sure he hasn’t won any championships, but that’s more through injury timing than anything. Since his return from injury this year at Murray Bridge, Ward has been unstoppable and has won every round since, most of them with 1-1 results. He’s still young and is eager to hop over to Europe sooner rather than later to try his hand against the world’s best. If he can bring his speed over with him, this kid could cause some serious upsets.

8. Josiah Natzke:
The next ripping youngster to come out of New Zealand, 16-year-old Josiah Natzke was hand-picked by Stefan Everts and given a five-year factory deal with Red Bull KTM in Europe at the end of last year. In his first year racing the European 125MX Championship in 2015, Natzke has overcome a slowish start to become a late-bolter and is currently second in the points chase, just 10 points off Frenchman Maxime Renaux with two rounds remaining. Under the guidance of both Ben Townley and Everts himself, Natzke has the talent and the backing to be a massive force in world motocross in a few years’ time.

7. Hunter Lawrence:
Sunshine Coast resident Hunter Lawrence shocked both the Australian and international motocross community when he stormed to an incredible third at the Junior Motocross World Championships in Spain last weekend. The fast-finishing 15-year-old clocked up some of the quickest laps of the weekend in his two races, where he finished 5-4 for third overall, slicing through the pack like an angry sashimi chef from average starts in both races. Even though he’s not even out of school yet, Lawrence has made no bones of the fact he wants a career in Europe and his outstanding performance well outside his geographic comfort zone won’t have gone unnoticed by the talent scouts.

6. Jason Anderson:
Last year Jason Anderson seemingly came from nowhere to win the Western Regional 250 Supercross Championship after a torrid, high-profile battle with Cole Seeley. In 2015 he stepped up to the premier division and has continued his meteoric rise. Normally it takes MX2 graduates a year to come to terms with the big boys, but ‘El Hombre’ actually looks more at home on a 450 than he did on a 250. He picked up two supercross podiums – a second at Anaheim 1 and a third at St Louis – and three motocross dais visits (so far) at Hangtown, Muddy Creek and High Point. Without a doubt, Anderson is going to be one to watch next year. 5. Tim Gajser:
Slovenian Gariboldi Honda rider Tim Gajser has been in the shadow of Jeffrey Herlings over the past couple of years, but this year has seen him shine, especially in the latter half of the series. A hat-trick of round wins at Maggiora, Teutschenthal and Uddevalla has seen him put on a late charge for the championship. He’s locked into battle with Valentin Guillod (more on him in a moment), but the 65cc and 125cc world champion Gajser could become the kid to break Honda’s embarrassing drought and earn the manufacturer its first world championship (either MX1 or MX2) in more than 12 years.

4. Adam Cianciarulo:
Adam Cianciarulo has been touted to be the next big thing in motocross since his days sweeping the Loretta Lynn’s amateur championships. His much-anticipated step into the pro ranks mightn’t have gone as planned, despite dominating the East Coast 250SX championship in its early stages last year and re-signing with Pro Circuit Kawasaki for 2015. This year has again been fraught with injury for the likeable Floridian, with a pre-season shoulder injury destroying his supercross hopes, then a second shoulder injury (the different shoulder) cutting short his Pro Motocross hopes. 2016 could be the year where AC shows the world what he’s capable of.

3. Valentin Guillod:
With the exception of the much-hyped Jeffrey Herlings, the stars of the MX2 class in the MXGP aren’t exactly household names over here and the name Valentin Guillod mightn’t even register on your radar. Guillod was the only rider to beat Herlings fair and square at Matterley Basin this year when he went 2-1 to the Dutchman’s 1-2. The Swiss rider has some of the craziest scrubs in the business and his style on a bike is matched by his speed and smooth riding style. Currently locked into battle with Gajser for the MX2 title (they’re tied on 390 points), Guillod is turning a lot of heads this year.

2. Cooper Webb:
Yamalube/Star Racing/Yamaha has a hell of a talent in Cooper Webb. The 19-year-old seriously hit his straps this year as he carved up the competition on his way to a dominating Western Regional 250SX crown. An ankle injury at the opening round of the 2015 Lucas Oil Pro Motocross Championship wrote off any changes he had of claiming both indoor and outdoor titles this year. Still, since his return to the fray at Red Bud a couple of weeks ago, Webb has again shown his class with a second at Red Bud then back-to-back wins at Millville and Washougal. While the title fight might be between Marvin Musquin and defending champ Jeremy Martin, Webb is again stealing the spotlight and causing mayhem. We have a feeling his rivals better get used to it.

1. Romain Febvre:
If you’d put $100 on Frenchman Romain Febvre carrying an almost 100-point lead in the MXGP championship with five rounds remaining, you probably could’ve retired off your return on investment. In a year that many deemed to hold the most stacked rider list ever (Cairoli, Villopoto, Desalle, Paulin, Nagl, Strijbos, Van Horebeek, de Dycker, etc) the rookie Febvre simply wasn’t on anyone’s radar. Last year the Yamaha racer finished third in the MX2 championship. Granted, injuries this year have decimated the MX1 field, but many forget that Febvre first put his name in lights at the opening round at Losail when he caught and passed Ryan Villopoto – one of the fastest guys on the planet – in one of the races. That moment obviously gave Febvre a massive boost of confidence and self-belief and now it seems nothing can stop him. if he carries this momentum through his career we might just be witnessing the early years of the next Stefan Everts and Antonio Cairoli.