Unsung performers we spotted at Shepparton.

MotoOnline.com.au highlights three standout performances from the weekend’s seventh round of the 2015 MX Nationals at Shepparton. Radar isn’t strictly about the winners, it’s about the unsung racers that we spot performing above expectations on any given race weekend. 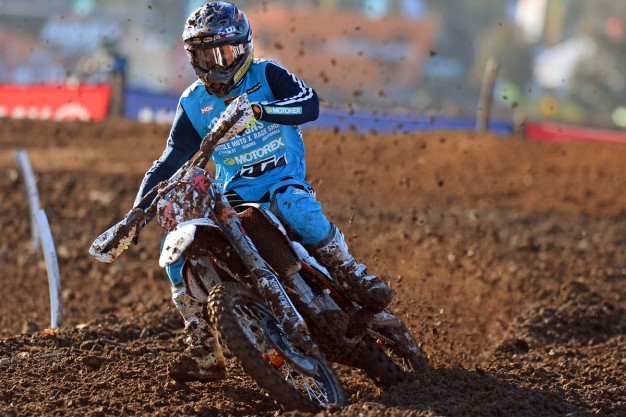 Kirk Gibbs (KTM Motocross Racing Team) – MX1, 3rd overall:
It’s no surprise to see Gibbsy on the podium once again, however it’s almost flown beneath the radar altogether that the current championship leader braved the pain of a fractured shoulder-blade on Sunday! It was a heroic performance that will make this year’s crown all the more special if he can clinch it, which by all indications looks like he will before we get to Coolum’s finale next month. Ross Beaton (Peter Stevens DPH Yamaha) – MX1, 11th overall:
After a longtime on the sidelines, plenty were happy to see Ross Beaton return at round six for the second half of this year’s MX Nationals – his last full season came as an MXD rider in 2010! So when Beaton raced to 11th overall on Sunday at Shepparton it was a really positive storyline to follow, especially his solid 10th place finish in the second moto. Some further strong results across the final rounds will go a long way toward next season for the Victorian. Matt Ryan (Proformance Kawasaki) – MX2, 14th overall:
Expectations were high for Ryan in his home race on the calendar and he started out strongly by qualifying in eighth, just a second outside Jay Wilson’s pole position laptime. A top three start in moto one delighted his local fans until some late errors dropped him to 12th, before the second moto was even tougher in position 17. Still, he showed his potential after limited starts this season and you can only expect him to improve from this point.