Wow, that was a busy week just gone by and, to be honest, one of the aspects I personally enjoy most about this job – providing readers information as it happens and providing quality coverage at the elite level of the sport.

From our unrivalled MX Nationals coverage, which provides a huge amount of return on investment for the local industry supporting motocross, to our consistent news that’s rolled out daily, the week gone by feels like possibly the busiest of the year for a variety of reasons.

I can’t express just how delighted I was to see Matt Moss back on form with Team Motul Suzuki at Raymond Terrace last weekend, putting the naysayers to rest and proving he will be a factor over the second half of the season. To see the number one plate in the mix is always good for the sport and it will do him wonders in securing a top, well-paying seat in 2016 after a shaky start.

There’s no doubt however that for this year Kirk Gibbs is the class of the MX1 field and, with a 60-point buffer over teammate Luke Styke in the points, this title is his to lose. Funnily enough, I did the calculations this week and 23 points of that advantage have come via Super Pole!

Styke hasn’t made Super Pole in his rookie MX1 season over the first six rounds while Gibbs has been a fixture, which comes as a massive benefit to him in the points chase. Styke isn’t overly concerned considering its his first year in the class, but he will have to improve if he’s going to challenge for the title this year or next.

It’s interesting because the whole Super Pole process really highlights the guys who are capable of hanging it all out over a lap, but they don’t always perform over the course of a full moto. In Styke’s case it’s the opposition. Qualifying’s his weakness, but you can guarantee he will be up there in the podium mix come race time.

Both Gibbsy and Styke were expected to debut the 2016 KTM 450 SX-F at round six, but a delayed arrival put a stop to those plans, and now it’s unlikely we’ll see them until round nine at Toowoomba in late August. It shouldn’t make much difference to results regardless, although the team is adamant huge gains will be made, and we’re not going to disagree. 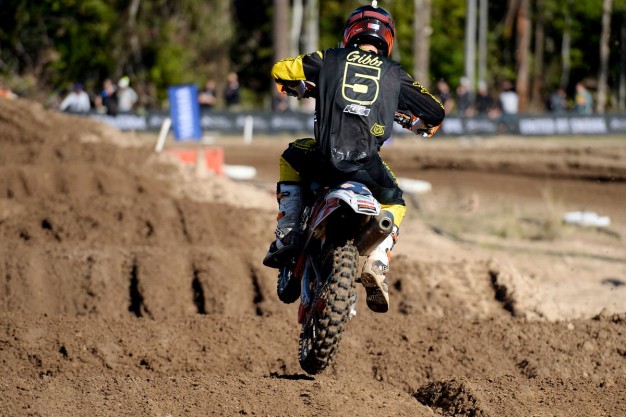 Keep in mind that Kawasaki also has a brand new KX450F in the works and there’s a chance it could arrive before season’s end, however traditionally the team would wait until supercross to debut such a new model. You never know though, it could arrive early and the Adam Monea/Dylan Long combination could have benefits of their own come the final rounds.

And while those are just a few general observations that have come to mind while writing this particular feature, make sure you follow all the action from every round of the MX Nationals on MotoOnline.com.au. We’re trying to do extensive coverage that doesn’t just touch on the winners, but also showcase the broader side of the sport here on a local bases. It’s a real pleasure!

Youthstream has announced the 2016 MXGP World Championship calendar, despite multiple rounds not yet being locked in, and there’s hope that at least one of four TBA will be an Australian GP. There was definitely talk of an Aussie round at last year’s Motocross of Nations direct from the series organisers, but there’s been no recent signs it will happen. Fingers crossed though.

The biggest news is the sport came late in the week – although not entirely unexpected – that Ryan Villopoto has hung up his helmet once and for all. It was a legendary career and one that will long be remembered, despite a difficult last harrah in MXGP. We salute you, RV.

Turning toward off-road here to cap things off, the news came through early Friday morning that Toby Price has landed a full factory Dakar Rally deal with Red Bull KTM for 2016. We’re not sure where it leaves his enduro career as he has said rally will take preference if he secures a major contract, but no doubt he is the class of Australia as it stands. Stay tuned for more.

That’s enough from me for now, here is Simon Makker with his weekly inclusion in Moto 360…

Yesterday was a big old day of announcements, not the least of which was Ryan Villopoto’s (unsurprising) announcement that he’s retiring from racing, effective immediately. We’d heard plenty of rumours flying that RV2 would make the announcement sooner rather than later, and as usual, the whispers were correct.

I don’t know about you, but for me RV2’s decision comes across as a huge anti-climax to an incredible career. Right now as he battles his way through his back injury I’m sure he has no regrets whatsoever. But given a year or two, it’d be interesting to hear his thoughts and musings about pulling the pin with so much unfinished business and unanswered questions left blowing in the wind.

Villo’s step to the MXGP caught the imagination of fans across world and brought a huge amount of attention to the European-based championship. Many people believed he was paving the way for an influx of world-class riders from the US and for that reason alone, people watched and waited to see if he could embrace the new formats, rough tracks and unfamiliar racers to kill it.

But to tell the truth, apart from Thailand, which was more suited to his style of riding, Villopoto didn’t shine like we hoped and the much anticipated battle between himself and eight-time world champion Tony Carioli sadly never came to fruition. What will be interesting to see now is if Villopoto’s very limited presence in the MXGP did enough to encourage other US-based racers to give the grand prix circuit a shot or if they’ll put it in the ‘too-hard basket’, assuming that if the ginger ninja struggled, they won’t have a chance in hell of succeeding. I think the next two years will be telling in this respect.

This year’s grand prix championships have turned into a torrid survival of the fittest. As well as Villopoto, former red plate-holder Max Nagl and pre-season favourite Clement Desalle are both out with injuries, while in MX2, the dominant Jeffrey Herlings has just announced he’s missing this weekend’s race at Kegums after compound fracturing his finger last weekend at Uddevalla.

Staggeringly, despite the DNS this weekend, the 0-0 result at Teutenscthal after his crazy scrub crash and this DNF last weekend with his finger, Herlings will still maintain a 20-plus championship points lead over Tim Gaisjer after this weekend regardless of the results. He really has been that ridiculously fast this year.

But while everyone else continues to fall like flies, our Australian racers Todd Waters and Dean Ferris continue to improve. Ferris was fourth and Waters fifth at Sweden and both are really starting to find their feet in the European scene.

Waters is now ninth in the championship (but should move to at least eighth this weekend with Desalle and his teammate Nagl tumbling down the leaderboard with no-shows) and Ferris 13th.

However, after struggling with health issues over the opening rounds Deano seems to have really turned a corner the past two weeks and his results have skyrocketed. If he continues to show that current form, he’ll be leap-frogging his way up the ladder as the championship enters its final throes.