Raymond Terrace winner on last weekend and the future.

KTM Motocross Racing Team’s Kirk Gibbs stretched his advantage at the top of the MX Nationals MX1 class standings on Sunday at Raymond Terrace, winning overall via 2-1 results to build a dominant 60-point lead in the standings after six rounds. MotoOnline.com.au spoke with the South Australian following moto two to get his take on the weekend and more. 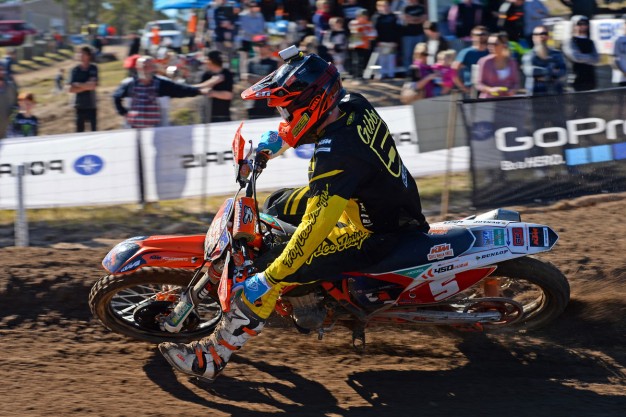 Overall winner at Raymond Terrace, you must be happy with that and it’s a good way to start the second half of the season.

Yeah for sure, that’s always the plan to come out and do well. Raymond Terrace hasn’t been the best to me over the past couple of years, but I just felt like I was in a great place, I have great confidence and just wanted to keep the ball rolling. I did that, two great starts helped – the second one not quite as good – but we changed some things in between moto one and moto two with the bike and it was just unbelievable. I felt so comfortable and it shows. I came through a couple of those guys and went to the front.

In that second moto a lot of good guys were up front, so it must have felt good to come out of that one on top and get the overall?

Yeah, for sure. Like I said, I’ve got a lot of confidence at the moment and I feel like I’m in a great place. All the boys and I put our heads together and changed some things with the bike, it’s just a blessing to ride and I just had so much fun in that last moto. The pace was strong at the start, my teammate was riding really well, and I had to put my head down, find a few lines and try be mistake-free. The track was tough today.

We’re not sure when the 2016s are coming, there was some talk about them coming in time for this weekend, but obviously not. It doesn’t seem like it’s much of a concern either way for you at this point though?

No, not at all. Our bikes we have right now are amazing bikes, so it’s not crazy for us. Just with the new ’16 being a bit lighter, a bit faster and obviously turning a bit better, it’s gonna make it even better if we can get on them before the end of the season. 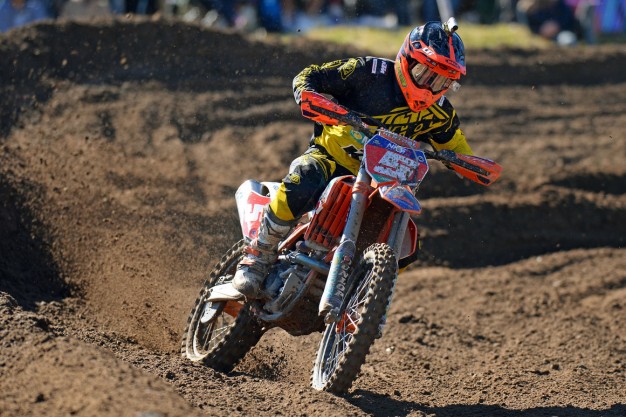 In terms of the championship, you’ve got a comfortable advantage. Do you start thinking championship at all or still take it race-by-race, enjoying it?

I think if you start thinking championship things go backwards, so for me it’s just to keep doing what I’m doing. I feel really comfortable and like I’m not doing too many things wrong, so I will just keep chipping away and my goal is to hopefully keep extending that points lead and when we get to Toowoomba hopefully wrap this thing up one round early.

Hey, I remember at the beginning of the year there was some talk about doing some races in the GPs, so is that still on the radar at all or are you just focusing on this title?

Yeah, obviously the title’s the first thing, but I did sit down with Rob [Twyerould] and have a chat to him about maybe getting over and doing a GP, so it’s all in the ropes at the moment and if everything comes together then yeah, I will be over there at the end of the year once this is all finished.

And that’s your long-term goal, to get over to Europe?

Alright, well done on another win!